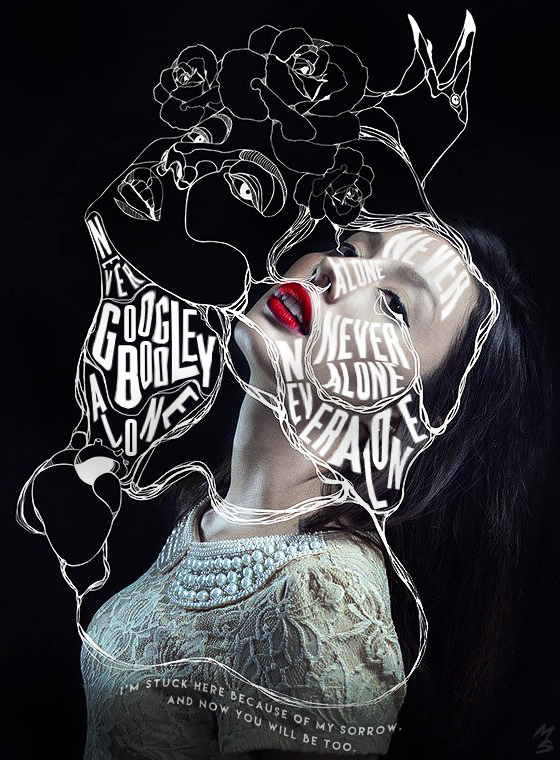 All bolded words mean that a ghost is speaking.

The mysterious male finally allowed me to go to school, but he came along as well. I walked up the front steps to the entrance of the school, his hands holding onto my school uniform tightly. My backpack constantly hit my back as I walked, but I'd taken some more painkillers this morning, which dulled the pain from each blow. I slowly walked to my locker, having a few minutes of free time before the bell rings.

I froze while grabbing my math book, the hands gripping me painfully. When Sehun reached my locker after calling out to me, he leaned against the lockers, slightly out of breath. "Where've you been? You haven't been to school in days." He asked, concerned.

"I didn't feel good," was my only reply. It was the only reply the unseen iron grip allowed for me to say.

Sehun nodded in understanding. Rubbing the back of his neck shyly he asked, "Well if you're feeling better today, maybe we can go out again afterschool?" My heart beat rapidly inside my chest, my mind going blank. My mouth parted, yet no reply came out.

The owner of the ruby red eyes beat me to it.

Sehun's head whipped to the side before I could even blink. I watched him slowly turn his face back to me, clutching his cheek in pain, anger, and confusion. The ghost had struck Sehun... and he'd used my hand to do it. I closed my eyes, wishing, hoping for this to be some cruel trick, a dream, and not real.

"Sehun, I-," I stopped midsentence, unable to continue. An invisible hand was covering my mouth, preventing me from apologizing to the first guy I'd ever shown interest in.

He was ruining everything for me.

The other unseen hand pushed me down the hallway to my classroom, leaving bewildered schoolmates and an even more bewildered Sehun in my wake. I obeyed, knowing that trying to fight the invisible force was useless. No other incidents accured after that. Students whispered loudly as I walked past, their voices mockering me cruely.

I'd hit Oh Sehun, but it hadn’t been me.

I practically ran out of the classroom when the final bell rang. I was so ready to go home, to curl up underneath my covers and escape from the world and the controlling male invading my life. I was reluctant to walk into the house at first, but the thought of my bed was too temping.

I unlocked the door and stepped inside, setting down my bag by the door. As I was locking the door shut, the phone rang shrilly from the kitchen, startling me.

I headed towards the kitchen, grabbing a juice from the refridgerator before picking up the phone.

Hitting the green button, I held the phone to my ear with my shoulder as I opened my juice. "Hello?" I mumbled. There came no answer. The only thing that could be heard was heavy breathing and static. I hung up the phone, thinking it was an accidental dial, but as I turned towards the stairs, the phone rang again.

I turned back towards the phone and answered it. "Hello?" I asked into the receiver, my brows furrowed in confusion. The heavy breathing and static could still be heard.

Air was suddenly trapped inside my throat, unable to reach my lungs. Unfortunately, I'd know that voice anywhere. It literally kept me up at night, whispering random bits of poems and thoughts into my ear.

I immediately hung up, throwing the phone onto the counter with a little bit too much force. I ran towards the stairs, the only sounds inside the house were my feet pounding up the steps, along with a low, hysterical laugh of delight. I climbed faster, taking two steps at a time. My cellphone went off, freezing me at the top of the staircase. With shaking hands, I brought the device out of my pocket.

The screen claimed that it was an unknown number, but I knew who it was. I didn't want to answer the call, but my finger acted against my will and hit the accept button.

With my body trembling, I held the phone up to my ear. "Who is this?!" I asked, my voice rising in anger and frustration. Through the static and the heavy breaths I managed to finally learn his name.

It had been a week since that phone call. The sound of his voice still gave me chills. "Mom?" I called out, wondering where she was. I'd just arrived at the house, and I could hear her footsteps walking back and forth upstairs. It'd sounded like she was pacing, like she was waiting for something.

Was she waiting for me?

Was it even her?

That single thought had made me pause halfway out of the living room. I tried to calm my racing heart, reminding myself that if she needed me, she'd call for me. I’ve been so on edge recently. I groaned, burrowing my face into the couch cushion beside me, wanting to disappear. Correction, wanting a certain possessive male to disappear.

I just have to last until the weekend, I remind myself, releasing a sigh of relief. Mom told me this morning that she'd planned a weekend getaway for us at the beach. According to her, we needed to spend some time out of the house and in the sun, surrounded by the ocean and miles of sand. I couldn't wait to leave, already smiling at the thought of getting away from this house, and away from him.

As I laid there on the couch, I noticed the sound of the shower running upstairs, but I could also still hear footsteps. I stood up from the couch, once again leaving the living room to head towards the stairs.

I slowly climbed up, listening for anything suspicious. The footsteps had stopped, the sound of the pipes and the running water the only sounds currently being heard. I started to head back downstairs, scolding myself for my unreasonable paranoia, when there was a bloodcurdling scream, followed by a loud crash.

I ran back upstairs in a flash, fearing the worst. My body was numb, my mind blank. My mother was unconcious on the floor of the shower, the water spraying her back. There was a small puddle of blood that was quickly growing from a large gash on her forehead. I ran into her bedroom and called an ambulance, all the while shaking my mother, trying to wake her up. I wrapped her up in her towel and got another towel to press to her forehead.

As I did this, an invisble entity watched me emotionlessly. "She was going to take you from me. She had to be stopped."

My body shivered at the sound of his voice, but thankfully the ambulance arrived, jolting me out of my fear induced state. I bolted down the stairs, opening the door for the paramedics and directing them upstairs to where my mother was injured. They quickly, but carefully, strapped her to the gurney and loaded it into the back of the ambulance. One of the paramedics turned to me as they climbed into the

Please Subscribe to read the full chapter
Like this story? Give it an Upvote!
Thank you!
← Previous Chapter Next Chapter →
Author's Thoughts
I’m so proud of this story and grateful for all of your love and support!!!
Read More →
Back to Top ↑
No comments yet
Back to Top ↑
Foreword
Promoted - Advertise