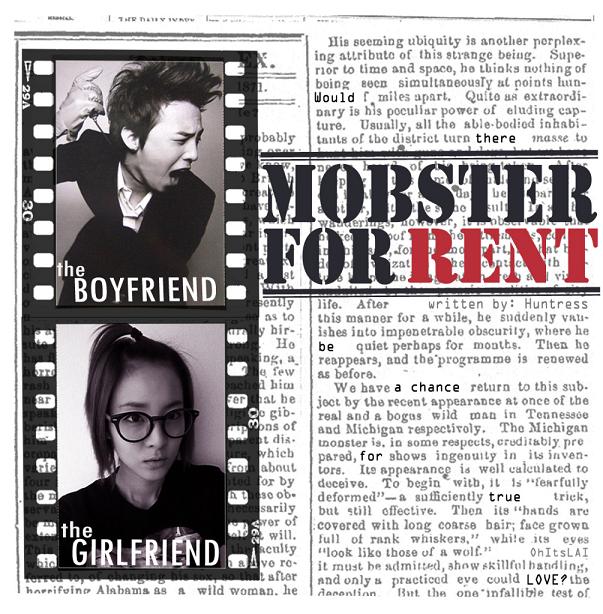 This is a work of fiction and any similarity to reality is just an accident. It is not intended to infringe on any rights of the companies and individuals involved in this story. All names, places, businesses, characters, and incidents are a product of the author’s imagination or are used in a fictitious manner. Any resemblance to actual persons living or dead, actual events or locales is purely coincidental.

Sandara Park needs a boyfriend. And she needs to have one PRONTO!

"That stupid Bom!!", she thought as she marched out of the conference room. She will definitely deal with her good-for-nothing bestfriend later.

The moment she sets foot at the work area, everybody paused and stared at her teasingly.

"Miss Park, we heardddd itttt!!", one of her officemates called out in a sing-song voice. She just gave them a lopsided smile.

"We look forward to meeting him!!", they added.

Dara entered her office and slammed the door shut. She paced back and forth while holding her forehead in frustration. She then looked at the calendar by her desk and groaned. It's already January.

Ottokae?!!, Dara slumped on her swivel chair and stared at nothing in particular. How the freaking hell will she find a boyfriend in a month?!

"OTTOKAE!!!", she half-screamed in annoyance while messing her hair. Bom entered her office with her hands on her waist.

"THANK YOU for ruining my life", Dara sarcastically said as Bom took a seat. At their conference meeting, her mischievous bestfriend announced that Dara will bring her boyfriend at their Annual Company Acquaintance Party which will be held on February.

"What's eating you?", Bom inspected her nails and totally ignored her. It took Dara's entire willpower not to morph into a giant green monster and swallow her bestfriend whole.

"Have you forgotten? I don't have a boyfriend!! Now the entire office is looking forward to meet my non-existent boyfriend!"

"Oh come on. I was obviously just joking back there. But I was surprised that you didn't deny it", Bom reasoned out and stared at her.

"You want to show Donghae that someone is interested in you", Bom raised her eyebrows knowingly. Lee Donghae - her heartbreak. Dara became silent as recollection of events last December came crashing to her consciousness. Donghae is their officemate and is the Lead Technical Specialist. She likes him but he only sees her as one of the boys. Dara and Donghae are good friends and would often be mistaken as a couple but Donghae will always vehemently deny it. Just as he did during their Christmas Party where he said, "Dara and I are impossible. We're just drink buddies!"

"Hire a gigolo", Bom's voice slashed through her wandering brain.

"I said, hire a gigolo. Or rent an . Pay him to act as your boyfriend during the party", Bom gave her a cheeky smile, placed the women's magazine on her table and pointed at a small ad. Dara stared at it.

Boyfriend For Rent, minimum of one month. With free one-day trial period.

Bom quickly ran for her life as Dara was about to throw the nearest desk ornament at her.

Just out of boredom.

And because I'm feeling a bit bummed lately. ( I started this fanfic long ago but I decided not to post this)

NOTE: DO NOT POST THIS FIC IN ANY OTHER SITES


By the way, here' s the link to my Romantic Comedy Fanfics

Next Chapter →
Author's Thoughts
Hi All! It was brought to my attention that some people are asking why some of the chapters of my stories are hidden. Just to clarify, the publisher asked me to do so, this is the reason why most chapters are hidden ^_^ Don't worry, it will be made public again once our contract lapses. ^_^
Read More →
Back to Top ↑
No comments yet
Back to Top ↑
Foreword
>> Collapse chapters <<
Promoted - Advertise

Donghae's friend drops off an old mannequin at his place. It kisses him when he's asleep.