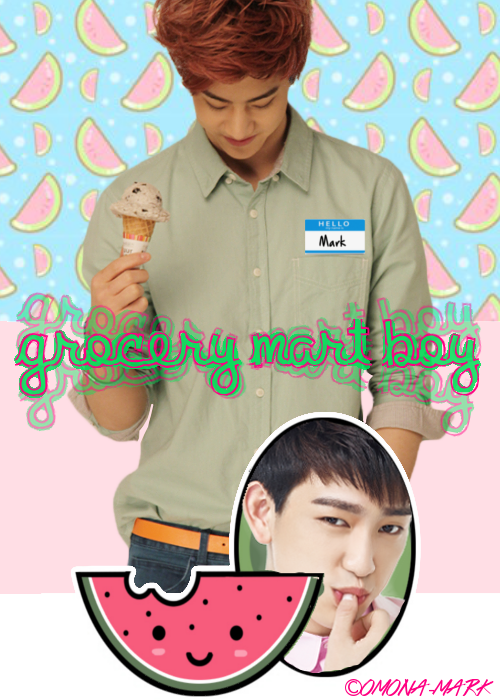 Normally, Jinyoung does not go out. Atleast, not during summer under the blazing hot Korean sun (even if Jaebum would insist sometimes) when he could be in the comfort of his room, with the aircondition on high and the music volume even higher.  There was nothing that could make him change from his baggy home clothes, consisting of loose shorts and a sleeveless shirt that made him look like a clothes hanger. Summer was freedom for Jinyoung, where he could do as he pleases.

Unfortunately, Jinyoung would never be free from his mother.

There was a sudden lack of fruits in the Park household, which is rare especially in this hot weather. There were no watermelons to mix with ice and soda, a classic summer treat, and that fact seemed crazy to Jinyoung's mother. It took a lot of coaxing (and some threats) before she got Jinyoung to get up from his bed and venture into the outside world. Ofcourse, nothing but grumbling escaped the boy's lips until he reached the front door.

"Aren't you going to change your clothes?" Mrs. Park eyed the baggy outfit in distaste.

Jinyoung grinned for the first time since he started walking.  "If I'm lucky, they'll ban me from the mart forever because of looking like a hobo."

Jinyoung rarely went to the mart. He figured shopping for food and other stuff was something his mother was there to do. He also got the occasional snacks from Yugyeom's bag when the poor kid wasn't looking, so why the effort of walking all the way? Surprisingly, he didn't get lost as he found himself standing in front of the closest mart.

'Fruits inside' the sign read, and Jinyoung was glad to be in aircondition once more as he stepped in. He made his way quickly to the nearest watermelon, complaining in his head how heavy it is, before hauling it over to the cash register. He didn't bother looking around until he was finally in front, staring right at a drop-dead gorgeous face.

"Hi!" The cute boy greeted. He had red hair (was that even legal?) that went great with his sparkly white teeth (this was definitely illegal) and topped off his deep voice perfectly (how was this guy even human?)

Jinyoung suddenly felt very, very conscious about his ridiculous looking outfit. He threw some cash on the table, which was probably rude, and refused to look straight. He glanced everywhere but at the boy's face- like his name tag, for instance. Mark, it said. Foreign, it sounded. English, Jinyoung is not good at.

It took Jinyoung barely a second to race out of the store.

Jinyoung would be lying if he said he didn't think of the cute cashier boy named Mark in the two days he spent back at home. For some reason, he couldn't concentrate on his game, or the new episode of this show he's watching. He would try to concentrate on something, and next he knew his mind would be invaded by a certain face, a certain name, a certain voice.

So his mother was more than surprised (she checked if he had a fever) when Jinyoung actually volunteered to go buy some more stuff at the mart. Not forgetting, how he changed from his hobo look into his favourite red shirt and a decently sized pair of shorts. She looked at him doubtfully and repeatedly asked if he was meeting someone special.

"No, mom, I just don't want to embarass our family name this time," he replied, but it was lacking a bit of that sarcastic air and was instead replaced by something a bit foreign; nervousness.

Jinyoung's eyes first went to the cash register this time, and sure enough, Mark was still there, looking handsome as ever (how unfair) as he gave an old lady her change. He pretended not to glance and walked briskly into the store, glancing at everything he saw. Every now and then his sight would go from a random box of chocolate to the figure behind the counter, and back again.

He was somewhere in the pet aisle (which was odd because he didn't even have a pet) when Jinyoung suddenly heard that familiar voice right beside him.

"Can I help you with anything?"

Mark was standing right next to him,  something Jinyoung did not expect. Someone else had taken Mark's place at the cashier without him noticing-  damn dog food grabbing his attention. He wasn't sure how long he just stared there in silence, his mouth gaping a little, making him look like a fish. Eventually, he found his voice.

"Yeah, I'd like a, uhm, your biggest watermelon?" Jinyoung wanted to slap himself. Thankfully, Mark chuckled a little at that and graced him with that dazzling smile.

Mark pointed to the right, "then it would be over at the fruits section, not here." He had a playful look in his eyes as he asked the next question. "Weren't you there a few days ago?"

Jinyoung's eyes widened, and a dozen thoughts flooded his mind. Ranging from happy ones (he remembers me!) to not so happy ones (I looked like a loser) but overall, he managed to nod and tried not to sound dumb as he replied with a yes.

"I'll lead you there again then, please follow me," Mark said, grinning as he made his way to the fruits section. Jinyoung stared at the random stuff in his basket, consisting of things he just threw in while he was staring. Now that he realized it, he was pretty sure they didn't need a dog's chicken toy at home. He quickly dumped some useless stuff out and followed.

Mark stopped right beside the watermelons. He managed to smile that smile again.

"Here you are. I'll be waiting for you by the cash register, I just took a short break," He said, smile still in place as Jinyoung continued to nod dumbly, speechless by the sudden turn of events.

This watermelon is still heavy, Jinyoung thought, making his way to the cashier. Also, Mark really does look good, wow.

At the sight of him with the huge watermelon, Mark smiled again. "Well, this is a familiar sight, except you're dressed a lot better today." Jinyoung felt his face burn at that, not sure if it was a real compliment. He thought he was close to death when Mark continued on by saying, "You still look cute though, don't worry."

Jinyoung was pretty sure his face was red and that he won't be able to speak properly in awhile, so he didn't question Mark when he asked for a valid ID- something he didn't do before.

Mark glanced at the card and back up, "so, Jinyoung, huh? That will be 18000 won and your phone number."

This time, Jinyoung managed to snap out of his trance so he could splutter out a "w-w-what?!"

Mark had a cheeky grin on his face, enjoying the sight of the flustered boy.

"No phone number, no watermelon, so how about it, Jinyoung?"

Jinyoung eyed the scrap of paper and the pen Mark managed to push forward (where did he get it?) and felt his heart beat faster as his hand reached for the pen. In his best penmanship, he managed to write down his cellphone number, adding in a small "Jinyoungie" on one corner. Without looking at Mark, he pushed the paper and pen forward.

"Thank you! Here's your receipt, enjoy your day!" Mark said professionally, handing Jinyoung a piece of paper and some bits of change. The things he bought were placed in a plastic bag, and Jinyoung again raced out of the store. He didn't head for home right away, choosing instead to sit on a bench just a few blocks away, with his cellphone gripped tightly in his hand.

It rang a few seconds later, and almost dropped out of Jinyoung's fumbling hands.

"You were waiting for my call?"

"You're sitting on a bench a few blocks away with your phone in hand."

Jinyoung pouted, glancing at the mart and seeing Mark looking out the glass walls.

"And if you don't stop pouting, I might be tempted to head over there and kiss you."

Jinyoung allowed a smile to ease its way onto his lips, staring straight at the boy in the store, and deliberately pouting some more. He heard Mark chuckle over the phone, shaking his head.

((yes, I'm ending it there! Let your imaginations run wild at whatever could happen next TAHAHA.))