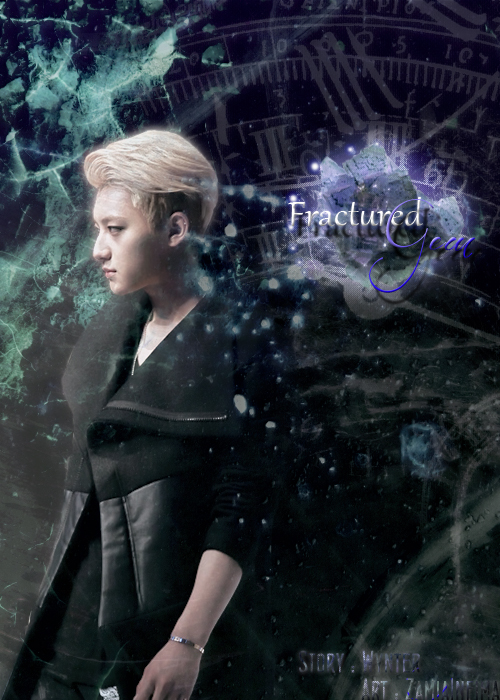 “That was seriously close.”  Luhan laughed before jumping on Chen back.  “I won, now carry me to class you loser.”

“But you’re heavy, get off of me!”  Chen whined as he tried to throw the other off of him, but Luhan just held on tighter.  “You freaking leach, let go of me!”

“I won fair and square, so move your slow and take me to class.”  Luhan nagged as he hit Chen’s shoulder.

The six of us just sprinted from my house since we over slept this morning.  Luhan and Chen made a bet as we were running like crazy down the streets.  First one here got a piggyback ride to class and Luhan beat Chen by a couple seconds, both were exhausted so having to carry someone’s extra weight to class was torture.

The rest of us were laughing as our group made our ways through the halls.  I was at the back of the group as we approached the classroom, we all filed in single file through the door.  The bell went off a second before I stepped into the room.

“Detention after school Tao.”  The teacher snapped at me.

“What why?”  I asked rather flabbergasted.  What did I do?

“You were late for class.  The bell rang before you were in the room.”

Oh, you have got to be kidding me!  A fraction of a second and I get detention!  I huffed as I marched over to my desk and sunk into the seat.  My day is now ruined.  I could see the amused smirks on my friends’ faces, all of them lucky that they were in front of me.

I didn’t dare not pay attention to my teachers for the rest of the day.  I do not need them to add any more time than I already have stuck in this place, two hours is enough already.  Lunch couldn’t have come fast enough.  I need that hour break from lectures or I was going to go insane.

“Seems you aren’t coming to the arcade then.”  Kris chuckled as he put his arm on my shoulder and made me his leaning post.  “Maybe next time.”

“Shut up.”  I growled as we sat down at one of the empty tables in the cafeteria.  “Why am I always the one that gets into these situations.”

“Time isn’t on your side.”  Xiumin offered as an explanation, “It never has been.”

“It’s only two hours Tao it can’t be all that bad. “  Lay offered through mouthfuls of food.

“It’s two hours of time I have to spend here.  I already spend enough time in the confines of this wall.”  I argued.  “But it can’t be helped, at least not this time around.”

Luhan clapped my shoulder; “We are almost out of this place for a few months.  Try thinking of all the free time we will have away from here.  Two hours now is nothing compared to two months freedom.”

I jus shrugged and ate my lunch.  I guess if put into the larger perspective two more hours here isn’t all that bad.  Soon I will have the summer all to myself to spend how I want without the strict rules of this school.

Sitting with nothing but my thought to accompany me is torture.  I would rater be listening to one of the teacher’s lectures instead; but alas, none of that is coming to be.

I’m situated in a classroom with four other students from different grade levels scattered around.  The teacher that forced me to be he