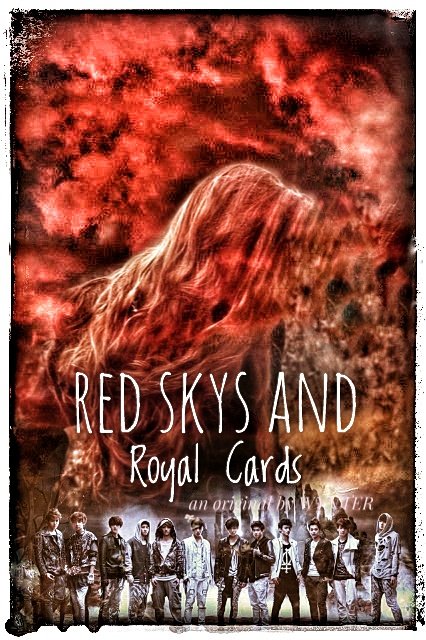 What happens when you are thrown into a world and a war you never knew existed?

The world isn’t the same as it once was.  The blue sky I used to look up at with the fluffy white clouds floating past has vanished and was replaced with a sky so red, it looks like a sea of blood floating above our heads.

The people aren’t the same either.  Our way of life has changed so much, but you only know that if you are one of the few who knows why it has changed.  I used to be blissfully unaware of how much things have changed; my parents still don’t even know the extent of the changes like most of the population.

If you are curious as to how I was exposed to all this, I would have to tell you it’s a long story.  So long that the people I tried to tell it to in the past would just brush me off and leave.

But if you want to know what really happened to the world and what so many are so oblivious to, I ask that you hear my whole story through and not just brush me off as some crazy person.

My story will shatter your views of the world and I apologize in advance but everyone should know of the war that is happening right in front of them even if they can’t see it.

I will tell you how I was shoved into this war without even knowing I was part of it. *Sticks up for what she believes is right

*Will not be pushed around by anyone

*Can be hotheaded and stubborn

*Has a soft spot for her Warriors and her family.

Some terms I will be using so as to not confuse anyone I'll make a Glossary and if you need to remind youself what something means look here, if it's not listed ask and I would love to help clear up the confusion.

Red Sky Academy: A prestigious University that is very selective on the students they allow to enter.  Established a year after the sky changed.  It is a school only for Dealers so they can learn how to use their powers and to train with their Warriors.

Dealer: A person who has the ability to control Warriors by summoning them from the Cards they reside in.

Cards: Cards that hold a Warrior in them.  Cards are easy to come by if you know where to look or do a certain thing that grants you a certain card.  There are 12 rare cards - The EXO Cards - that only a Royal Dealer can claim.  Cards can be classified into Decks.

EXO Cards: 12 cards that only a Royal Dealer can summon and own.  These 12 cards hold the 12 most powerful Warriors that can ever exist.  These 12 cards are thought to be a legend in the World of Cards.  These Cards are their own Deck and do not fit into a specific Specialty.

Decks: Group of Cards that would consist of 12 Cards that all share the same 'Specialty'.  Cards are stronger when together in a complete deck and once a whole deck is assembled an ability is granted to the Dealer.

Specialty: There are five main Specialties: Fire, Water, Earth, Air and Spirit.  Every Card falls into one of these five categories - except the EXO Cards - The specialties would determine what powers the Dealers who own the Deck will have.

Warior: The being held within a Card.  They are sealed in their cards until a Dealer summons them.  They are slaves to their Dealer's orders, be it to help someone or to kill them.  By defying an order, the Warrior would be subjected to the Dealer's punishment or Card Destruction.

Claim: The process in which a Dealer claims a Card and the Warrior as their own and thus createing a bond between Dealer and Warrior.

Summoning: Done by kissing the Card that Dealer owns.

Card Destruction:  When a Dealer voluntarily destroys a Card and the Warrior it holds.  Normally done to a Card whose Warrior refuses to obey a command given by its Dealer.  Only way to completely destroy a Card beyond repair, is by burning it.

Royal Family: The first family of Dealers before the Red Sky came and new Dealers were born.  Holds the most power and knows the secrets of many of the cards.  Killed in order for non-royal dealers to posses their Cards.

Trailer~ Check it out!

Updates come Whenever I have Time -  currently! (Sorry, life is crazy)

And no, I didn't misspell the title, I did that on purpose. Photos I use are not mine, credit to original owners

Chapters will contain swear words and some violence. This is a heads up if you do not like that kind of thing.

If my story seems like someone elses, it is pure coincidence.  This is completely from my own imagination.

Do not plagiarize!  I work hard to come up with this story and I would appreciate it if no one steals all my hard work.

This is my first story so I'm hopping that you like it, please let me know what you think.

I really appreciate feedback so I can improve on my writing skills!

Next Chapter →
Author's Thoughts
With how crazy the world is right now, my updates are slower. I will not abandon this, please have patience and I promise to update again soon. Stay safe everyone please. Many Blessings, Wynter (8.20.20)
Read More →
Back to Top ↑
No comments yet
Back to Top ↑
Foreword
>> Collapse chapters <<
Promoted - Advertise