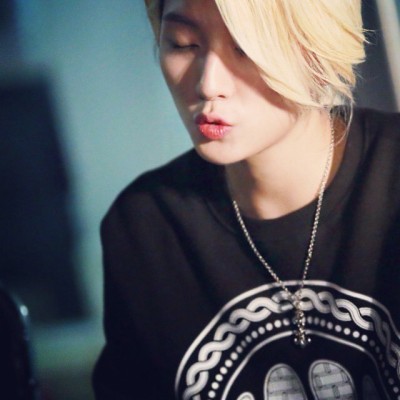 "Good morning~." Minhyun sang as Ren joined him and Jonghyun at his locker.

"Shut up." He snapped back.

"Someone's a little grumpy. Is it your ual frustrations?" Minhyun mocked. Ren glared at him.

"Isn't your brother's birthday coming up? He's coming home from the military for it, right?" Jonghyun asked, before Ren would attempt to kill Minhyun.

"He is." Ren muttered and threw one of his books into his locker. The loud sound caused some students passing by to look at him.

"My parents are making me invite Jess to the party." Ren sighed. "I'm seriously going to kill my sister-in-law for this. If she hadn't blabbed about Jess to my parents, I would be fine. But, that ruined everything!"

"What's so bad about Jess coming to that party? She's met your folks now. She's doing stuff with you now. What's the worst that could happen?" Jonghyun put a hand on his shoulder.

"My brother encouraging me to marry her after she graduates?" Ren muttered. The two paused for a moment.

"Yeah, that's a problem." They eventually said in unison. They leaned back against their lockers and watched students pass by.

"So, what's up with you and Jess?" Jonghyun asked after a while. Before Ren could answer, Jessica joined the boys and gave Ren a big kiss.

"I'm guessing it's good." Minhyun smirked. They left the two alone as Jessica and Ren continued their activity. He walked her to class afterwards and met up with her again after school, in the library. They did their homework together, which was mostly Ren doing half her work, and then headed to his car. They decided to go for coffee and went to a drive through, before Ren parked the car nearby a flower garden.

"Are you alright?" Jessica asked after a while.

"I'm fine." He smiled a small smile before sipping his drink again.

"You're kind of quiet. And that's coming from me." Ren sighed.

"Fine. Something kind of came up. My parents want me to take responsibility for the catering for my brother's birthday party, but they have this condition."

"They want me to invite you."

"Don't get me wrong. I like you, a lot. But, my brother and I are really close. If you meet him and he doesn't like you, I don't know. We might have to break up at some point." He smiled sadly at her.

"I'm not sure. But, he's had some bad experiences. Girls only got with him because of our family's wealth. It left him with an impression."

"Yup. Main reason I'm so close with my friends, is because with each other we don't have to worry about having one ask for money."

"That's sweet." She smiled at him. He smiled back and cleared his throat after he realized he was acting sincere.

"You don't think I'm trying to take your money, right?" He smirked at her.

"Nah, I just think you're with me for my looks." He put his arm around her and pulled her closer. She chuckled at his joke.

"What?" He spoke quietly as their noses rubbed together softly.

"N-Nothing." She said after realizing she was staring. He continued smirking and kissed her, catching her a bit by surprise.

"Don't we have to get ready?" Jessica asked as Ren ed her shirt.

"Yes. That's why we're taking our clothes off. To get changed." He kissed her neck as he undid the final button.

"Pretty sure there's something different than changing on your mind." She gasped and he nibbled on her skin.

"Well, it's been well over two months. I figured I could get to look at your body. Shyness should be gone by now." He smirked at her. He pulled the shirt off before giving her a passionate kiss.

"I-I don't know." She pulled back when she felt his hands on the front of her pants.

"Still? I've already touched you a dozen times. Not to mention how much you've touched me."

"You what?" She surprised him by kissing him deeply. "Whatever you were trying to say, I agree." He smiled. The two made out for a while. Ren had taken his shirt off and put her on top so she was straddling him. As he enjoyed the sound of her groans while he on her collarbone, his sister-in-law barged into the room, followed by two servants with clothing racks on wheels.

"Jesus Christ! Kahi! Knock next time!" Ren shouted. He pulled up his bedsheets to cover Jessica up as he got up to continue yelling.

"Put on a shirt and get out. Jess and I are trying on dresses."

"And you can get ready together with your brother. Hurry, your outfit has already arrived and is in his room."

"You're seriously kicking me out of my own room?!" Kahi only looked at him, waiting. Ren turned to Jessica, who looked down at the sheets out of embarrassment.

"Fine." He grumbled and grabbed his shirt from the floor and left, slamming the door.

"Did I interrupt ?" Kahi frowned at her.

"Wait." Kahi sat down next to her on the bed. "You're serious? You guys were about to have ?!"

"Uhm." Kahi shooed the servants away after they set up the make up and shoes. "I think so."

"So, tell me, you guys been doing anything, or do you not know what you like yet?" Jessica looked away. "Oh, come one! You can tell me! Is it ?"

"I thought you were here for dresses, not talk about !" She replied with a beet-red face.

"Fine." Kahi rolled her eyes before standing up and showed her a series of options. Jessica grimaced at all the pink and purple she showed, saying she wasn't in the mood for purple or pink. She kept glancing at the back of the rack, which held a calming blue dress on its hanger.

"I'd rather wear that blue one."

"So you're wearing red."

"Red." Kahi smirked at her. Jessica grew uncomfortable. They eventually went down to the ballroom after getting dressed and their make-up done. Jessica soon found Ren talking to a slightly taller young man which had similar facial features.

"I thought you said you were going to wear blue." Ren frowned as the two girls joined them.

"Your sister-in-law is annoyingly persistent." Ren chuckled at her sad smile. She was taken aback by Kahi's squeal as she hugged the other guy. Ren put his hand on her waist and pulled her closer.

"Is this your brother?" Jessica asked with a smile. Ren nodded. Kahi let him go after a quick peck on the lips, and the two turned to Jessica and Ren.

"The infamous Jessica. It's so nice to meet you. Kahi and Ren's friends have told me a great deal about you."

"Of course they did." Ren muttered.

"It's nice to meet you." She smiled back. After a few seconds, she grew uncomfortable with the way he was staring at her. "Something wrong?"

"It's weird. Aron said you were a lot clingier around Ren, but you seem kind of tame right now. I expected a full make out session in the middle of the dance floor."

"I'm going to kill him." Ren rolled his eyes. Minseok chuckled at the two. Ren's butler walked over and leaned closer to Ren's ear.

"Sir, we have a small problem in the kitchen."

"What is it?" Ren muttered back annoyed.

"The whine was left out of the cooler last night and we don't have enough shrimps for the appetizers. Half the guests have already eaten, so we can't spread them out evenly."

"Are you ing kidding me?" Ren spoke loudly.

"Is something the matter, son?" Ren's father joined them out of nowhere. Ren smiled nervously at him.

"It's nothing, father. Excuse me for a moment." He smiled kindly at the group before leaving towards the kitchen, followed by his obviously anxious butler. Jessica smiled awkwardly at the group.

"Who the hell was the idiot who left the wine out?!" Ren yelled at the chef. He pressed him against the cooler door by his collar.

"I told my sous-chef to receive the bottles. I went home early with a headache." He spoke nervously. Ren glanced to his side where the souschef stood. He swallowed hard at Ren's glare.

"But you didn't put it away properly?!" Ren growled.

"It wasn't even that warm in here. I thought it would be fine until the waiters came!"

"But, you were wrong!" Ren shoved the chef aside, pushing him to the floor as he turned his body towards his new target.

"Better do it fast, or ALL of you are fired!" Ren shouted. All of the staff present swallowed hard.

"You!" He pointed at on of the waiters. "Call Pont Le Mar. Tell them to bring twelve bottles of their most expensive red and white wine they have in storage in half an hour! And you!" He aimed his hand at his butler.

"Tell the guests if they get impatient that an exquisite surprise is coming their way and it'll be worth the wait. Kitchen staff! I don't care what the hell you have to do, but fix the appetizer issue!" Everyone held their breath as they looked at him. "Did I stutter? Now!!" Within a second, staff ran around, desperately fulfilling his wishes.

"Young master!" One of the waitresses rushed into the kitchen.

"Your father heard about what happened. He wants to see you in his office, now." She nervously rambled.

"Goddamn it." Ren sighed annoyed and left the kitchen. He stormed through the crowd to his father's office, trying not to look too angry for hill the guests.

"You okay?" Jessica asked as she pulled his arm for him to turn around. She found him holding his head.

"You sure? You look a little stressed." She felt his warm hand and placed the back of her hand against his forehead and cheek, feeling his hot temperature. "You feel kinda hot. Maybe you should lay down for a while."

"I swear to God, it's nothing, I just need to go talk to my father, okay?" He turned to leave, but she pulled him back.

"Please, I think it's best if you lay down fo-"

"I said I'm fine. Stop worrying, damn it!" Ren yelled at her. Jessica lowered her hands and head. Luckily for him, the