When you look into a mirror, what do you see?

What if I told you that there's another world on the other side of the mirror?

Hi everyone! This is Goddess and I have a new fic for you :)

Another EXO one for the EXOtics out there~ Bringing to you the lovely maknae of EXO.....*drumrolls*...OH SEHUN!

The mirror is a very strange thing.

When one stares into it, one can see his own reflection, an identical image to oneself except that everything is laterally inverted. It is the exact copy of oneself, it mirrors one's actions, it even behaves like one.

But what if....the mirror holds more secrets than you think?

Because in fact, there was another world right there, right in your mirror. A world that seemed completely identical to the one you were in but at the same time not the same.

If things were black on one side, it was white on the other. If someone was a nice, kind person here, they were a mean brutal person on the other side.

And right where the two worlds meet was the mirror.

What if....some mirrors could interchange people from this side and that?

.....only they didn't belong to your side of the world?

A/N: I know this concept can be confusing to some so I'm explaining it here again.

So lets call this world we are in the "A" world and the world on the other side of the mirror the "B" world.

Whatever there was in A, it would exist in B. The two worlds as exact replicas of each other, except things and personalities were a lot different in both worlds.

Everyone looked the same in both worlds, but their personalities would be entirely different from the B world if they were from the A world.

So if for example, Sehun A was good in sports and a total lady killer in this world, Sehun B would be the total opposite in the other world. He would at sports and be totally unattractive, but academically able should Sehun A have lousy grades.

It doesn't exactly mean that Sehun B is ugly because Sehun A is handsome though. It's just the way people perceive him in his world and the way things are on his side of the world which just results in opposite degrees of attractiveness.

Okay I don't know if you guys get what I'm trying to say so if you have anymore queries, you can pm me or post on my wall :)

THANKS TO BEAUTIFULOVE FOR THE AWEEEESOME TRAILER ONCE AGAIN!

When you look into a mirror, what do you see?

What if I told you that there's another world on the other side of the mirror?When you look into a mirror, what do you see?

What if I told you that there's another world on the other side of the mirror?

Sunmi was a happy go lucky girl with few secrets of her own. She counted herself extremely fortunate to be friends with the five EXO-K boys, since she always thought they were too handsome to even befriend her.

They were popular, alright, but the strange thing about girls was that they kind of like their boys bad. Sunmi didn't really get that concept though.

It was like preferring their food spoilt and decomposed, as so to speak. Nasty.

Because the EXO-K boys were absolute role models and nice students in school, they somehow didn't garner as much attention, fame and affection than she thought worthy.

Or perhaps it was because one single guy had claimed all attention, leaving miniscular bits to the rest of the male population in school.

Sunmi would always shiver in disgust when she thought about that one guy she hated with a passion: Oh Sehun.

Really, she thought it was absolute rubbish when she saw stories about hate to love. Okay, so many there was a possibility of that happening, but never could that happen with Oh Sehun. The hatred Sunmi had for him was so darn pure and strong that it could never exist as anything else except for hatred.

Oh Sehun was just trash on earth. He had a badass attitude and thought he owned the world just because he was the star athelete in school, was the captain of the soccer team and had a drop dead handsome face.

He had no morales, no passion, no kind of heart whatsoever. Sunmi hated him so much that she could have Avada Kedava-ed him if she lived in the Harry Potter world and there weren't things like dementors to punish her should she get charged of murder.

Which was why it was kind of hard to adjust to the new personality when a bright and sunny Sehun from the other side came hurling into her world.

So yeah, she was kind of to blame that the Sehuns from both world switched places, and she took it upon herself to help set things right again.

But what if she found herself falling for the Sehun from the other side? Could she bear to let him return to his own world? Sehun was a klutz.

He had not many friends...oh alright, so many he only had one person he could consider a friend, but still well..life was alright for him. He was spectacular academically but other than that, there was nothing in Sehun's life that shone.

Sometimes Sehun would stare into the mirror and wonder what it would be like if he was handsome and popular, good at sports and a lady's charmer.

And then he would laugh at the ridiculous notion and shake his head. Sehun, you're a nerd. Keep dreaming.

So Sehun was just barely surviving in his own little world when one day things changed. He was thrown into an alternate reality where everything seemed to be the same but also awfully different.

All of a sudden, Oh Sehun was popular. He was suddenly extremely attractive in female's eyes, and he was supposedly the captain of the soccer team. He didn't just have friends, he had worshippers.

What in the world?

And amongst all that was happening, the strangest thing ever was that the school bully Kim Sunmi from his world seemed to be really nice in this one.

Things seemed to be going quite well for the Sehun in the other world, he realized. But he still wanted to go back to his own world. A nerd like him could never fit in with the jocks and soccer players. He could never find his place like the other Sehun did.

But then he did. He found his place: right next to Sunmi.

Even though he hated the Kim Sunmi back in his own world, he found himself liking the Kim Sunmi in this world more and more. She was the exact opposite from the back at his home and that was why he liked him.

Not only that, but he too forged memorable friendships with the EXO-K boys, finally feeling that he really did belong somewhere. That he was supposed to be here.

But the cold reality was: He wasn't.

He didn't belong here, not in this world.

So what would happen if he found himself falling for a girl that wasn't from his side of the world? Would he bear to return? 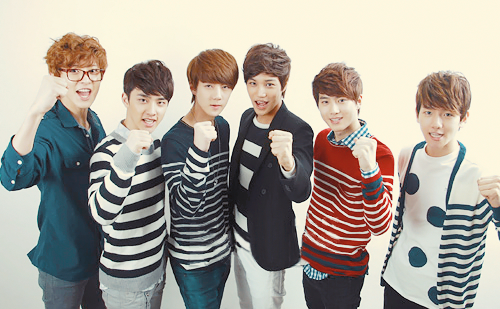 EXO-K: Five role model students that are friends with Sunmi.