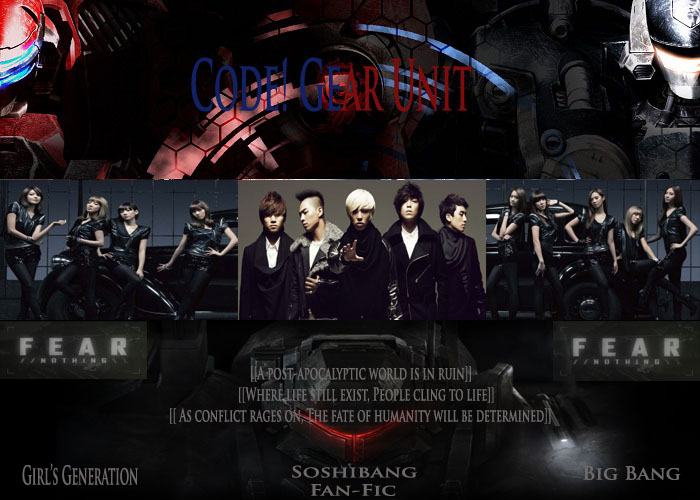 [[Story begins in the middle of the World's conflict.]]

The world has flourished through the new inventions and advanced technologies developed by plenty different companies.  However, what came after the short lived blessing, from the once green planet is an epitome of Death, Destruction and Chaos…

The Mecha-Gear Suits (MG-S) designed specifically to obliterate all the anti-government faction. Thus the start of the Third World War: Earth’s Fall

From this on, oppression, discrimination, chaos and poverty blossomed and people were divided by their state and classes. The rich ones caved in inside secluded cities protected by thick alloys of cold metal that separates and protects them from the outer barren wasteland. A world filled with remnants of the almost 20 years of hellish war. Every country has only one or two cities...

The Government is now under the rule of three main factions, countries as how they deem themselves… The As-ERD (Asian Empire of the Red Dragon) from South East Asia; Eu-COG (European Coalition of Ordered Governments) and the ever so isolated, self-sustaining and untouchable TARKUN (The Arabic Royal Kingdom of Unified Nations)  from the Middle East.

What of those left outside the danger covered world…

It lingered in the outside world… under the govern of some long time liberation and anti-discrimination groups, they waged war towards the powerful countries… They remained unwavering, not until the great and advanced Eu-COG uncovered their weapon, “The Hammer” thus everyone not part of the three main factions submitted to slavery and oppression.

Where the once forgotten paladins of light and just brings freedom to the hands of the oppressed.

Then the story will conclude…

This story contains some aggressive and vulgar words. There will also be quite some bloody scenes so please read at your own risk. Thank you ^^

[[A post-apocalyptic world is in ruin]]

[[As conflict Rages on, the fate of humanity will be determined]]