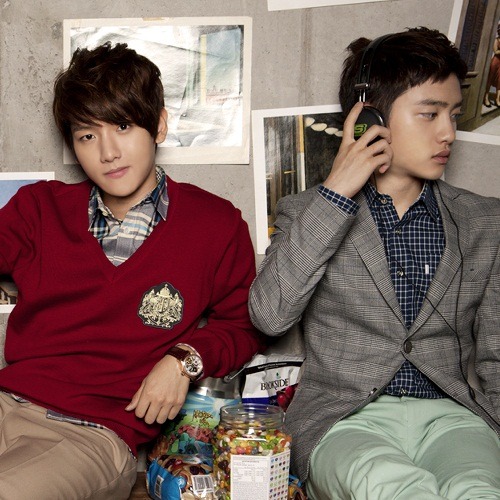 Kyungsoo has a radio show. Baekhyun is a saboteur. This time it's going to take more than just an apology to make Kyungsoo forgive him.

The older male opens his mouth to answer the question, but in the same moment someone comes stumbling out of the nearby bathroom. All students should be in class right now so it's kind of surprising that someone is there, but of course it's Chanyeol and he looks between the other two a couple of times before grinning widely. Baekhyun knows that this can't be good. When Chanyeol grins like that it's usually never good. "Hi guys." He's wiping his palms against his pants as he approaches them. "Wanna hear my new ringtone?" Baekhyun side-eyes Kyungsoo.

"Sure," the latter says with mock-enthusiasm before Baekhyun has the chance to decline the offer. "Why not? Let's hear this new ringtone of yours. Sure."

Baekhyun wants to object, but Chanyeol, who was never great at assessing critical situations like this, is already reaching into his pocket for his phone and Baekhyun knows he's most likely screwed. So he panics. "Uhm," he stutters. "Uhm, I-I... Now is not really a good time, Chany-"

"You er!" sounds Kyungsoo's voice, crackling from the speaker of Chanyeol's phone. "Byun Baekhyun, you er! I told you not to ing-" It cuts off right before the part where Kyungsoo told him 'not to ing touch his equipment' followed by Kyungsoo calling him a 'ing er'. Baekhyun gulps, slowly turning his head to look at Kyungsoo. The younger is visibly seething.

A/N: uhm. I don't really know what to say. bonnie kept talking about a high school!au (because of the ivy club shoot) and she kept pushing her baeksoo feels over on me and yeah. I don't know. I do know that this is very much inspired by the aforementioned ivy club shoot, just like the picture shows, and that the idea itself came from that exact picture. the main idea, anyway. my brain is an interesting place. I guess.
did I make it seem like I don't like baeksoo? I do. they're really cute. they're cute apart and they're cute together.