I'm sorry for the numerous polls but I thought the winning margin for L was too little for a proper win you see. Turns out he really won with that small margin a second time so....hahaha L it is. (:

Don't worry Daehyun fans, I'll write a story on him the next time. *Promise*

Chaekyung is the younger one, younger by two years. She's exceedingly beautiful, the fly-higher on the top of the pyramid in the cheerleading team, the one girl that every guy in school wants to date.

A single hi or smile directed your way would make you swoon in the most embarrassing way imaginable, and the worst thing is that you can't stop it. Her charm is just THAT amazing and THAT powerful.

And now let's take a look at the other daughter of the Lee family: Lee Jaekyung.

Wait, you say her elder sister is Lee Jaekyung. That Lee Jaekyung? //HORRIFIED// You're lying!!

Jaekyung looks nothing like her younger sister, or well, she chooses not to.

She's the one out of the two that fades into the background while her younger sister gets all the attention, the one that guys would never look twice at, the one that even girls feel sympathy for.

Jaekyung is the wallflower elder sister of the popular queen of the school. And no one knows about it.

Jaekyung and Chaekyung, sisters with an interesting story hidden behind their backs and waiting for someone to dig it out. The sisters meet the son of the rich principal of the school: Kim Myungsoo, otherwise known as L.

L has never looked twice at Jaekyung, don't blame him really she really isn't the type of girl you would remember. And L found Chaekyung beautiful and cute like any well-functioning hot blooded male.

But would the one he falls for be the most obvious choice to everyone around?

CHECK OUT THE TRAILER by Beautifulove!  :D

If it doesn't show the trailer for this story, click here: If you picked anyone in Woollim High school and asked them to describe Lee Jaekyung, this would be their answer (provided they even remember who she was of course):

Yup that was it. Because that was all people really know of Lee Jaekyung. They would never bother knowing where she came from, where she lived and what her family was like, of how many siblings she had and anything, just anything about her.

Because Lee Jaekyung was a wallflower, a wallflower that people tended to forget even if they really really tried to remember. And when people call her name, it would only be because 1. they wanted to borrow a pen, or 2. they bother to say something nasty.

But if anyone in school knew who was her younger sister, they would never ever ignore her. They might even try to get into her good books because they want to try to get closer to her sister.

Yes her sister was none other than Lee Chaekyung, the most sought after girl in the whole of Woollim High history. And strangely despite her sister's overwhelming popularity, Jaekyung never felt jealous of anything her younger sister had.

Because this girl loved her sister beyond words and no one would ever understand just how much. She would do anything for her sister just so she could be happy.

And this love was put to test one day, when Chaekyung had a new boyfriend: Kim Myungsoo.

L, the guy version of Chaekyung in terms of good looks and popularity. L, the guy who had the brains AND the looks AND the money. L, the dream guy and top of the MUST-HAVE list for every single sane girl out there.

L, the one that Jaekyung found herself falling for.

What should Jaekyung do if she found herself developing forbidden feelings for her younger sister's boyfriend?

To what extent can one be selfless? L had returned from the United States after three years of studying there while staying by his granny's side till she passed away. He finally enrolled in his rich father's school, returning to the familiar grounds of Korea.

He got back with his best friends from childhood, the Infinite boys of which were extremely popular in Woollim High School as well.

He wasn't the face of Infinite for nothing, L had scores and scores of girls having the hots for him, even back in the US. And the thing that attracted girls to him the most was that L was nice.

L was slightly nerdy and dorky, but hey with that face you can forgive anything like that. He was good at his studies and he wasn't afraid to show that he worked hard for his results. He was realistic, never the type to day-dream, and a little too conservative for Infinite's standards.

The Infinite boys were appalled to find that L hadn't gotten a girlfriend in his three years in US. With all the hot caucasian babes running after him, it was a miracle that he hadn't even looked at anyone of them.

In fact, they were thrown off their chairs to find that L hadn't gotten a girlfriend in his whole 18 years of his life. Goodness gracious, either this guy was living under a rock or his standards were so high that it flew out of the milky way.

L came back to Woollim and he met Lee Chaekyung. The one girl he heard all his friends talking about and saw boys drooling for.

And yes, L found her cute as well.

So when Chaekyung expressed interest in him, L thought it wouldn't be a bad thing to accept her. I mean, she was cute enough, he would develop feelings for her some day right?

And that was when he met Chaekyung's wallflower sister, Lee Jaekyung.

They got off to a bad start even though they never talked. Jane Austen had pinned the issue of pride and prejudice really accurately, and it was the reason why he disliked Lee Jaekyung even before he knew her enough to make a fair judgement of her character.

But love was strange because it often came knocking in the most unexpected people ever.

So what would happen if L found himself noticing his girlfriend's elder sister?

What would happen if he found himself going insane, falling for the most undesirable girl possible especially when he had the most beautiful one as his girlfriend?

Would he be able to make the choice?

Infinite: L's friends who are also very very popular. I mean, look at their faces and I dare you to say they're not worth the popularity huh huh?? (All of them are aged 18) 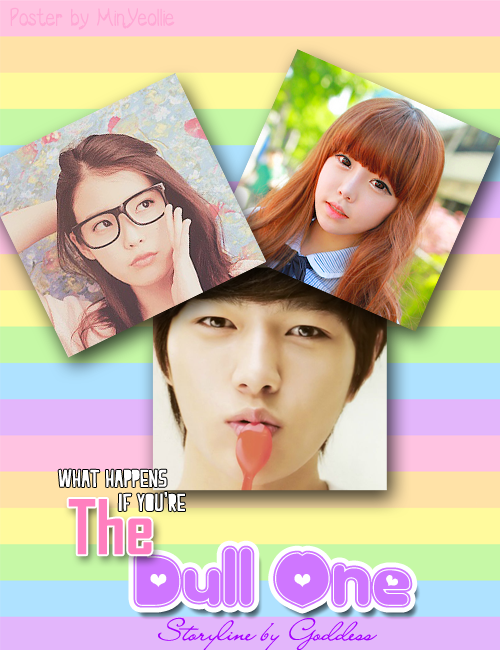 Next Chapter →
Author's Thoughts
Just realized this story has crossed 10000 subs & I didn't know. WOW. Thanks guys :)
Read More →
Back to Top ↑
No comments yet
Back to Top ↑
Foreword
>> Collapse chapters <<
Promoted - Advertise