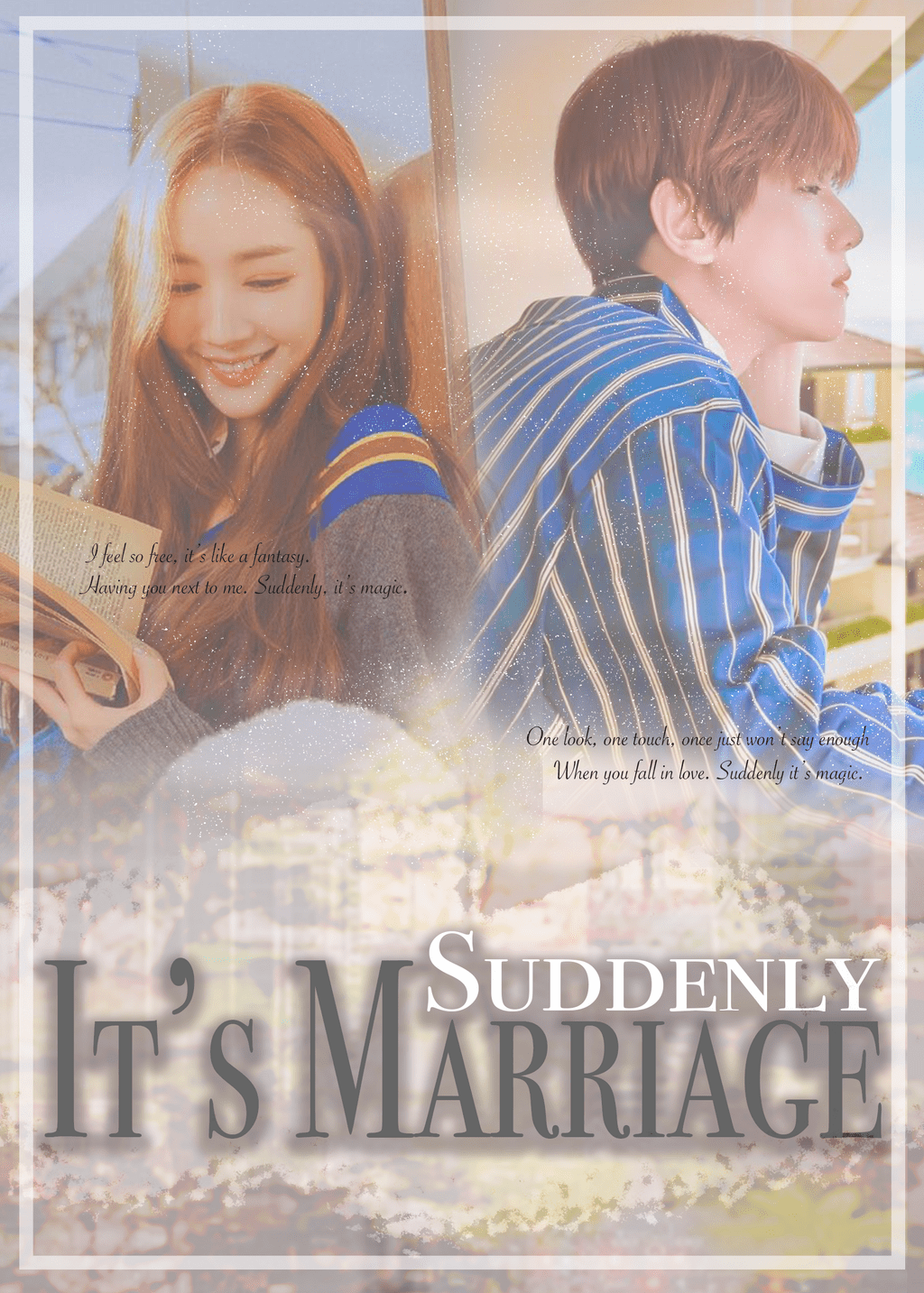 When a runaway heir meets a devoted heiress, things quickly escalate into a matrimonial mayhem.

(My inspiration for our new OC, as you can see, is the lovely actress Park Minyoung! She is the perfect face for Lee Nabi, just you wait!)

To set the mood of this story, I will be recommending songs including the artists who sang them for each chapter and also putting a portion of their lyrics at the end, just like what I did with my story, LOVE: OVERDUE. With that being said, I will also be compiling them into a playlist on Spotify titled after the story. (Click link to listen: Suddenly It's Marriage Playlist)

Byun Baekhyun didn’t have one. Not because he didn’t want to. Not because he was dumb and incapable. If anything, he was raised to be someone who was going to figure it out easily. Presented with relentless opportunities all his life, he was basically overwhelmed with required perfection because of his surname. Maybe that’s why.

Finishing school and getting a degree in business never got him anywhere, at least not by choice. Coming to work didn’t feel normal when your surname is written on the building in bold letters. It was for the family legacy and the family legacy alone. But he wanted to live a simple life. Maybe get a dog. Or two. Maybe rent a small apartment away from the city. Maybe get a nine-to-five job with a salary that’s just enough for him to get by.

Or maybe even meet people. He always wanted to try online dating. It wasn’t going to be another blind date set up by his parents. It didn’t have to be someone good enough for the family. Not someone from Byun Group’s many subsidiaries. He just wanted to try doing it on his own, getting to know people on his own terms. Maybe actually fall in love. Or not. A fling would be a great experience too.

He just wanted to live a carefree and low-key life. Not like this. Nothing in this room felt thrilling to him. Nothing seemed worth his time. He wanted more and his version of more was less. Less attention. Less meetings. Less phone calls. Less business trips. Less paperwork. Less pressure.

“Are you okay, little bro?” Finger snaps shook him back to his dreadful reality.

Then there was Byun Baekbeom, his older brother. Baekhyun never understood how accepting he was of everything. Baekbeom was actually happy working for the family. He loved the meetings. He loved the phone calls. He loved the business trips. And according to him, he had never felt like he was pressured into anything. Lucky him.

Baekhyun exhaled. “Yeah, I’m just tired.” Actually, he was more than tired. Both physically and emotionally. , he wasn’t even there mentally anymore. One would think work is lighter when your family owns the whole company, but it was never the case for them. If anything, everything was heavier. More complicated. More … pressure. If he had a nickel for each time he’d think of that word to associate with his life, he’d probably be richer than his own family and the corporation’s affiliates combined.

Baekbeom frowned. “Oh, come on, why don’t you stop whatever you’re doing now and let’s go home together? It’s your twenty-fifth birthday tomorrow, let’s take it easy tonight, why don’t we? You’ll have a party tomorrow night, aren’t you excited?”

“Yeah, right. Is it going to be a birthday party or a match-making event like yours was?” Baekhyun mocked, recalling his older brother’s birthday party just five months ago.

Of course, Baekbeom only laughed and shook his head. His eyebrows twitched as he waved a nonchalant hand at Baekhyun. “Stop being silly and let’s just go.” Glaring at his computer screen one last time, Baekhyun eventually gave in and started to pack up.

Employees greeted them as they walked through the office cubicles, some of them already empty. It was nine in the evening and raining. Just perfect.

Baekhyun narrowed his eyes at his brother as they stepped into the elevator together. “Where were you all day anyway? Don’t tell me Dad set you up on another meeting slash date?”

With a faint smile, Baekbeom shrugged. The answer was obvious. It was a ing yes. Baekhyun found it funny that his father could be so dedicated to selling off his sons, starting off with Baekbeom, of course. Because he was the eldest. Because he was readier. Because it’s the right time to expand his horizon, according to the old man.

“Well, it actually wasn’t that bad, I must tell you.” It was the first time Baekhyun saw that kind of look in his brother’s face.

Holy , did it actually work out this time? Their father would be wagging his tail once he heard about it, for sure. “Oh no,” Baekhyun slowly tilted his head as he watched his brother’s mouth curve up. “No ing way—did you actually end up liking someone Dad fixed up for you? You know what that means, right? Bro, think about it more or else there’ll be a wedding in a few weeks.” He wasn’t sure if he felt great about it. He didn’t trust it. What if Baekbeom was only doing this for the business, like always?

Baekbeom rolled his eyes. “I know that, geez. I just—she’s great and I think, uhm, we get along quite well. That’s it. Nothing has happened yet, we weren’t together that long either, she was busy. But we had quite a good time.” A shy smile eventually broke on the man’s lips as he looked away.

“Just be careful, you know how Dad is,” Baekhyun warned.

As expected, his brother only ruffled his head. “I know how resentful you are about our family’s way of doing things but it’s not always that bad, Baekhyun. Learning to love someone isn’t as hard as you think, and sometimes it even works out amazing. Look at Mom and Dad, they were arranged too. And they’re so in love until now.”

Baekbeom had a good heart. He was fun. He was athletic. He was talented. He had a lot of love to give. And he was easy to love. For Baekhyun, it wasn’t the same.

“Still,” Baekhyun replied, but nothing else came out of that one-word statement of his.

Arriving at the underground parking, Baekhyun realized that he was the only one with a car. “Didn’t you drive here?” He asked Baekbeom who quickly shook his head. “Don’t laugh, but … this girl actually had me picked up and dropped off by her driver after the meeting slash date.”

Baekhyun raised an eyebrow. “Wow, so you like dominant independent women, huh?”

“Oh shut up.” Baekbeom laughs as he went around Baekhyun’s car, going to the passenger’s side. “Since it’s raining, why don’t we go to our favourite ramen place before going home? I’ll treat you since it’s going to be your birthday in a couple of hours.” He added.

Baekhyun rolled his eyes as he got into the car. “Right, cause that ramen place is so expensive. No, I want more than that.” He joked. He never really cared about gifts, nor how expensive they were. But he was happy that he was gonna hang out with his favourite person. Especially now that there was a chance that he was going to lose him after he got married.

Assuming he would, as soon as their father found out that Baekbeom was interested in this lady.

Only his brother made sense to him. Baekbeom was his best friend, and he was always going to be. If anything, his brother was the only one keeping him from running away and leaving everything behind. Everyone else could go themselves. No, seriously.

Baekhyun started the engine before turning to his brother again. “You’re not going to, like, spend time with me less once you start seeing this woman, right? What if she’s a controlling manipulative career woman? And then she doesn’t let you see your family because she’s a narcissist and wants you and your money for herself?” It was a joke. He was totally bullting, but what if?

“Really? What kind of soap opera are you writing in your head?” Baekbeom lowered his head and raised his eyebrows, flashing him his usual unimpressed stare.

“Just saying, geez, you’re not even official yet and you’re already choosing her over me? Your precious little brother? I’m hurt.” Baekhyun joked again and as if it was understood, the two of them broke into a pit of laughter, slapping each other on the arms, just because that was how they laughed. They were brothers, indeed.

Well, look what we have here. I'm here! Still! I have no words, to be honest. I don't know if I should be ashamed or proud of myself at this point. But anyway! It's been forever since I last wrote an arranged marriage AU the last one being Married to the Nerdy Boy Do Kyungsoo waaaaaay back in like 2014-2015, it was even featured and was unnecessarily hyped at the time but unfortunately I also deleted that one lol. So this almost feels new to me and I am quite excited about it. I hope you are too! What I'm going to do a little difference with this story this time is that I'm going to try to not overstress about it or obssess over trying to update it as often as I used to which ends up with me rushing and settling with a less appealing chapter sometimes. I'm going to be very chill with this one (or not, it depends on my brain but right now this is what I think lol) and make each chapter more worth the read by taking my time, I guess? I don't really know what I mean but yeah, that's that?

Without further ado, let's ride the good ol' roller-coaster. Yall know the drill by now, if not, then hop on! Welcome to otornim's never-ending roller-coaster extravaganza!  Hi, I'm Otornim and I never know what I'm actually doing, I just type whatever pops out of my brain so prepare to be bewildered by the ever-changing emotions this story might bring.

No, seriously. Welcome and enjoy!!

Next Chapter →
Author's Thoughts
Gosh, ever since I got covid I feel like I have brain fog. I'm so sorry it's taking me forever to finish the update. I'm trying my best!
Read More →
Back to Top ↑
No comments yet
Back to Top ↑
Foreword
Promoted - Advertise