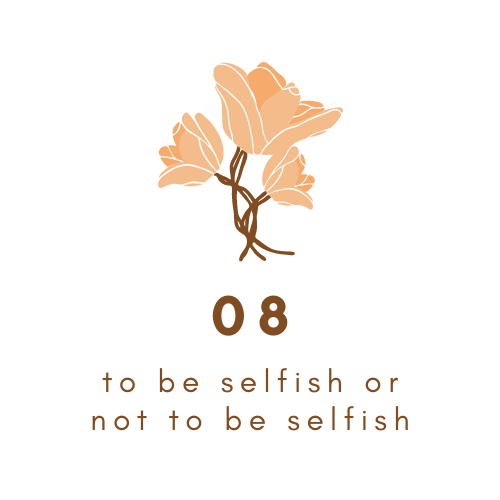 They’re very similar, but definitely not the same.

I don’t know who I’ve become, but it feels good, so I stay in her shoes a little longer.

I take a really long hot shower, wiping off hours worth of grime and dirty rainwater. But I don’t wipe off this version of myself. My chest is still somewhat raw and open. Anything can hurt right now. There’s no amount of rationalizing or depersonalizing that’ll protect me.

I stare at myself in the foggy mirror. My eyes are red, puffy as they come. I’m barefaced, hair untouched. But I don’t hate it. I don’t see someone weak. It’s like meeting a stranger who very quickly becomes your acquaintance.

His shirt hangs off of my frame. The cotton is silky between my fingers, and it smells like him. And all I have on below are his boxers that hang low on my hips. For whatever reason, my untidy appearance doesn’t bother me as much as I thought it would.

There are many revelations today, and I feel…okay.

I shut his bathroom door gently, and as I’m on the way out of his bedroom, I become distracted by the things that I’ve missed. I feel explorative, and before long, I’ve become distracted by how perfectly aligned his bed is placed according to the concave ceiling. It’s right beside the wall, as the ceiling slopes down at an angle.

Unlike my own bedroom, which is minimal and impersonal, his is the opposite. It’s filled with personal sentiments. He has weird trinkets. On his bookshelf, there are antique toy cars, books stacked haphazardly, unorganized, and frankly, all out of order. I’m itching to reorganize them, but I don’t.

Because I feel like I’m in his mind, I don’t want to touch anything. I want to see more, more, and more. I admire his odd furniture—a wine-colored lamp in the shape of a petal, a bruised wooden nightstand that looks like it’s been worn in, loved by another person, the loud patterned rug covering half of his room.

The wall adjacent to his bed is filled with pages from books that he’s torn out, most words blacked out, except for his favorite quotes.

I was within and without, simultaneously enchanted and repelled by the inexhaustible variety of life.

I trace over the words, the paper coarse against my fingertips. I’m fascinated by every little thing that I see. I’m absorbing them like a sponge, needing more and more despite being soaked to the brim. Keeping them in the parts of my brain where I want to remember them forever.

In a year, five years, or ten years, it doesn’t matter what we become. These were my memories to cherish.

Our lives are saturated. We meet a lot of patients, most of them lost to us, transforming yet into another blurry figure in the scheme of things.

Every day is the same. There’s the steady traffic in Atlanta. The blow of car horns. The fog of city pollution. The heady smell of gasoline mixed with damp earth.

But there isn’t any of that in here. Time remains at a standstill, and I’m transfixed in another reality entirely, a world that I’ve never been invited to…until now.

Eventually, he does come in to check on me. Except, he doesn’t look surprised when I’m nosing through his things. Opening drawers, sliding my fingers against the binds of books, none of them belonging to me, yet I can’t seem to stop.

He has a knowing look on his face when he passes me a mug. It’s chamomile tea.

“Are you trying to drug me to sleep?” I ask, taking a much-needed sip.

The side of his mouth twitches. “If I wanted to do that, I’d slip you a Benadryl. You’d never know.”

“Huh, and if you’d decided to kill me, I guess I’d never know either.”

“I’d never do that,” he whispers, “I’d kill anybody who tries to snuff out your existence. As fast as I can save someone, I’d put them back in the ground.”

I’m not sure if he’s joking anymore.

“That doesn’t sound so bad.”

“Oh, but it is. You don’t want to be stuck with me. I’m insufferable and replaceable.” I think back to Yixing and his phone call. To the side he’s got that I’ve never been able to draw out.

He tilts his head. “You wouldn’t be replaceable in a million years. There’s only one Chan. One mildly annoying, meddling Chan. But she’s mine.”

I get this urge to wrap my arms around him and take him with me.

He feigns hurt. “I bare you my entire soul, and this is what I get in return.”

I’m smiling so wide it hurts.

“There should be a disclaimer on your forehead,” he jokes, “warning: this person is malevolent. In the way that I can’t totally have you to myself.”

There’s a wistful quality to his smile now.

“Is this the psychiatrist Chan talking?”

I shake my head. “Not at all. This is the utterly selfish Chan that wants to drag you straight to hell with me.”

“At least it’s warm down there, huh?”

It’s night out now. After an entire day of lazing out and about, watching a marathon of movies, as crappy as they were, I finally let myself wallow, doing unproductive things.

Not to take my mind off of it but to have his company. It doesn’t matter if neither of us speaks. There’s comfort in knowing he’s right there.

Somehow, the space on the couch between us, when we were on opposite ends at the start of each movie, dwindles. When I tilt my chin up, I can feel his own resting against my head.

It’s endearing that he let me take care of him like old times sake because he knows that’s what I need, to be reassured that things don’t change too quickly.

I cooked for him again and died a little inside when he polished the plate clean. And then he grinned up at me and thanked me for dinner.

Judging by the dead of the night and the inactivity of cars and people, it was probably close to morning now,

Neither of us moves. We don’t do much other than the occasional wandering hands or sharing elusive smiles.

Until the movie ends, and the credits play on screen. That’s when he speaks, for the first time in hours, his voice rough and gravelly from having not used it.

I hum, liking how his voice feels on top of me.

“I think I know how his son felt.”

“Feeling lost and drowning in expectations. Granted, he wasn’t a terrible father. He cared enough to try that many times, before realizing that some things can’t be forced unless it’s welcomed.”

I tilt my head, pressing my cheek against his neck, inhaling until my lungs are so full of him.

“My mother was his mistress,” he says quietly. “He only ever came to see us when things didn’t work out in his real world. We were an escape to him. In the beginning, he only ever used his words to hurt my mother. But then it escalated because she reinforced his behavior by doing nothing.

“Then, he hurt her. Threw her against a wall. Sometimes, he hit her around a couple of times. But the next day, he’d buy us a ton of gifts. So that he could continue to gaslight us. To keep us dependent on him.

“There were always unspoken rules. I tried to read him when he stumbled on our doorstep. Was he here to take out his anger? Or was he here for a good time? I thought that if I could keep up with these ing rules, I could keep him from hurting us.

“Maybe my mother would have fewer bruises if I’d just done what I needed to. To endure whatever it was, to keep my mouth shut.”

I find his hand and squeeze.

“But the rules didn’t matter, did it? Every day, he found something new to punish you both for,” I surmise.

“Yeah,” he says, laughing bitterly, “my entire childhood was a cluster . I was so angry. Every day, it was the same thing. It just became exhausting. They weren’t married, but it was easier to tell everyone that she divorced him. People accept divorce, not the fact that my father constantly abused his mistress. And my mother didn’t want to be the talk of town anymore. Even when he finally abandoned us, I was still burning inside.”

“Your mother was an amazing woman.”

“She was the only thing I had left, and when she was gone, I couldn’t deal with the fallout. I’d rather die than have to live on the cusp of blowing over from every emotion I felt. And I’ve always felt emotions more intensely than others. Maybe that’s why I’ve taken on a new persona. Sometimes, I don’t know who the hell I am.”

I squeeze his hand. “You’ve always only been yourself. We pick whatever face to put on in order to cope. That doesn’t make you any less yourself nor does it make you inauthentic. Don’t think that nobody sees the effort you’re exerting. As long as I’m alive, things will never get lost in translation.”

I don’t say can’t or won’t because I’ve never been so sure of anything in my life. And I’m sure he believes me because the force of his embrace ing hurts.

“That’s not fair, noona,” he says into my hair. “I’m supposed to be the one comforting you, not the other way around.”

[a/n] another update! i actually wrote most of this in the car. i had a five hour car trip back and forth, so like ten hours? had to kill time since i made other people drive hehe

don't you just loveeee how darling these two are to one another? like man they're practically the married ones. but i want you guys to see that more than the romance. yk, that they have a true friend bond (sus friends tho)