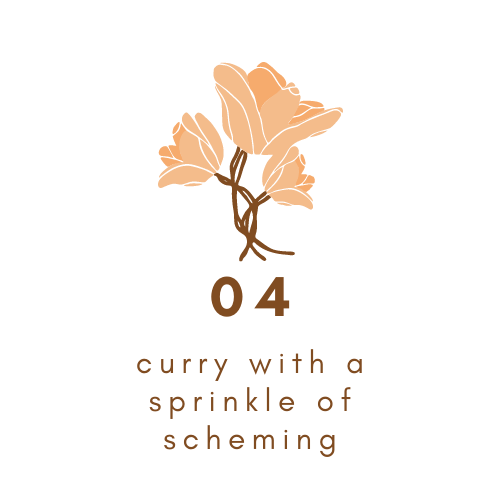 Having my first meal of the day with Sehun wasn’t exactly as nerve-racking as I thought it would be. We’ve had plenty of meals together. Our lunch exchange back in high school in the library, especially.

And after his mother died, I cooked for him, but now, I wonder, is he feeding himself okay?

In my heart, I knew things were always going to be this way. Because, in this entire world, he’s my person. I could laugh aloud at how much this feels like a romantic confession, but, the truth is, there isn’t a single label that’s befitting of the role he plays in my life.

“You know what I think, noona?” He muses.

I hum out a reply and take a big chunk out of my curry. He somehow knew where to buy my favorite curry.

Sooyoung and I discovered it when we were walking downtown aimlessly after a soul-draining shift. So, it was probably her. I hadn’t decided whether to commend her or interrogate her in case she’s told him other things.

Not that I had anything to hide.

“You know how, after years, conversations between couples die because they’ve run out of things to talk about?”

“What are you trying to insinuate?”

“Well, I’m just saying. We’ve transcended a ten-year committed relationship. There’s absolutely no way for us to fall out. The proof’s right here.”

I laugh, shaking my head at his ridiculous musing. “I liked you better when you didn’t talk.”

“That’s cruel, noona. But, if you really wish it, I’ll shut up under two conditions.”

“Easy,” he says, “you kiss me. Like in those romcoms you used to read. Unless you still do. In which case, boom, fantasy achieved.”

“Pass,” I say, trying to stifle another laugh threatening to escape. “What’s the other condition?”

His smile stays cool and unfazed, but his tone insinuates a different thing entirely. “I’m serious this time, okay?”

I wait for his next words. Imagine what will come out of his lips. He’s so unpredictable now, and in some way, I’m comforted by these feelings. I didn’t think I’d ever feel so undeniably myself, more so than when I’m with Sooyoung, around anybody. All I have prancing inside my head is a single question.

When did things turn out this way?

“Okay, what?” I ask once I’ve run out of patience.

He’s pushed his food aside and is leaning against the back of my armchair. I watch as he watches me. It’s an intimate gesture when he’s doing it. Because it’s almost like he’s trying to memorize everything. Every surface of my skin. From the top of my head to the tips of my toes.

He reaches for me, our legs touching, and he makes no move to adjust it. Just leaves it there, and says, “tell me everything. I’ll listen.”

My food’s been forgotten as I focus on his face, so familiar yet so strange to grasp. It’s golden hour, and out from the windows, sun rays kiss his cheeks. It’s unfair how beautiful he looks. Unfair how his eyes are practically dazzling brown jewels.

“I think I’m more affected by your sudden reappearance than my divorce.”

“Are we talking in a good way or?”

My lips split into a smile. “I missed you too, kid.”

His nose wrinkles and he bumps his legs against mine. “How do normal people do this? Reconnect after what feels like forever? I honestly feel like an idiot right now. What are some plausible talking points?”

“Lucky for you—you’re sitting right in front of a psychiatrist.”

“What’s that entail? Are you gonna roughly tie me down and sedate me?”

“Fell right into my trap,” he says, smiling roguishly. He flashes his palm. “I’ve got you dancing on these. ’Til death do us apart.”

“Hate’s just another way of saying you love me. In which case, you do.”

At the sound of his name, he slowly settles down, and his teasing hides behind a blanket of silence as he waits.

But I don’t say anything. Maybe I just forgot what point I was trying to make. It’s those damn glittery eyes of his.

He huffs out a chesty laugh. “You’re too serious, sometimes. Have you ever not thought things out?”

“Is that why you stayed in an unhappy marriage? For ten years, at that?”

I tilt my head, not allowing him to rile me up. I’m trying to figure out why. Exactly why he thought it necessary to point that out. And if he’d known exactly how long I’d been with Yixing—oh, yup, I was going to kill Sooyoung for telling him.

He shrugs. “I don’t know. Maybe it’s good to get angry sometimes, even if I have to be on the receiving end.”

“I don’t think being angry solves anything. Especially when nothing about my marriage has been brief and…what’s that word?”

“Yes, that,” I say, rubbing the back of my neck. “Everything’s been slow. He’s never rushed. Not our first kiss. Not the first night we spent together. Not with proposing. In hindsight, there’s never been much passion between us. Everything hurts less when we’ve already spent years, grieving the end of our relationship and waiting for the other to address the elephant in the room.”

“And, here I was, worried for nothing.”

It brings a smile back to my face. “You were worried about me?”

“Yes, because not only do you read thoughts—you inhibit them too.”

I throw my chopsticks at him, and it nails him this time. “You’re ridiculous.”

He’s way too casual about all of this, and I have to admit, there’s something magical about the way he navigates conversations. Anything serious is always followed up by something lighthearted, almost like he knew that I needed it.

“Any last grievances you’ve gotta air out before we join the ex-husbands party bus?”

I chuckle. “You say that like you’re a divorcee with three kids.”

“Offer’s only standing for a limited time. You’ve got seventy-five percent off on alcohol, and there’s vodka with blue razz chaser,” he chirps.

“Excuse me? I give you a chance to tell me your deepest, darkest secret about your abominable marriage, and you tell me you want ‘your couch’.”

“I know it sounds absurd, but there’s a rhyme and reason.”

He doesn’t look convinced. “You’re fighting custody over a couch.”

“I’m never telling you anything ever again. Mark my words.”

His grin widens. “It’s official then. Operation-Steal-Chan’s-Couch-Back. My place. On Sunday. We can brainstorm ways to emotionally manipulate your ex-husband into letting you keep your couch.”

“Why does it seem like you’re oddly taking advantage of this situation?”

“Did you just quote Bruce Lee?”

[a/n] they are bonding so fast awwww. i like writing their conversations. i also have so much fun when i'm not writing super angsty or dark stuff.