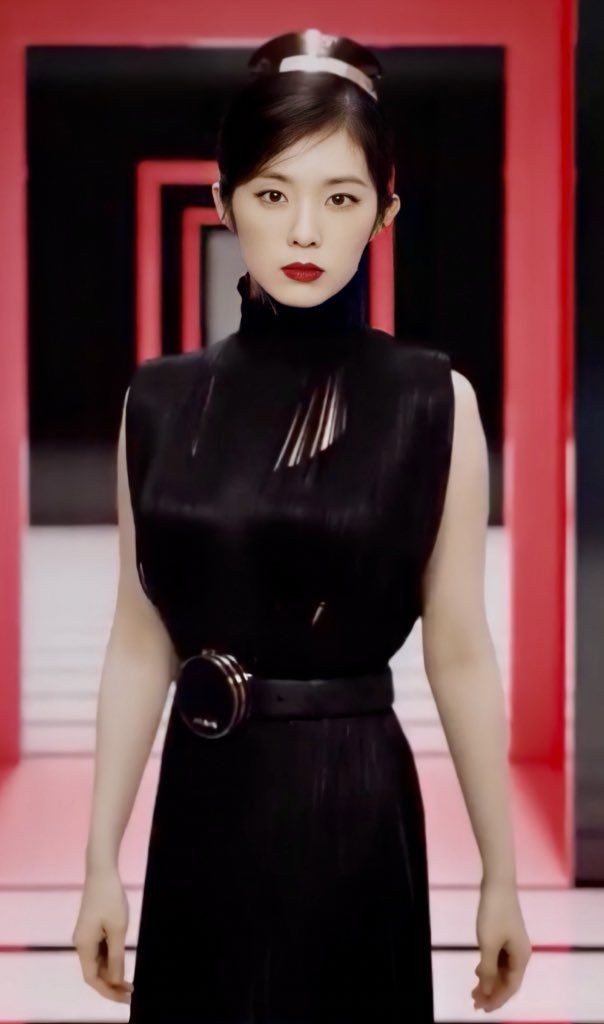 Seulgi, Moonbyul and Seungwan at the café for lunch. They come together from meetings with contractors. While waiting for their girlfriends to arrive, they have random talk like usual

“Hey new dad, how are you?” Seungwan patting Seulgi shoulder

“Yah, haven't we been together since morning. Why do you just ask now?” Seulgi glare at his friend

“I know you’re fine but I'm just curious about how it will feel after you become a dad. I don’t ask at the office because we don’t want anyone to hear, don't we?”

Seulgi scratch his forehead “True but I’m fine so far”

“You seem fine but what with dark circles under your eyes? You’re not a polar bear now. You’re panda” Moonbyul teasing his friend

“Bubble wake up often at night. I have to wake up too to make milk for her while Joohyun calm her down then we wait until she sleep again”

“You will cope with the new routine soon!” Seungwan cheering for his friend

“Who takes care of her when you and noona working?” ask Moonbyul

“Her grandma. If momma needs to go to the office, one of the maids will look after her for a while. Joohyun and momma already assign a maid to be her part-time nanny”

“Seul, are you moving to Bae house or still staying in an apartment?”

“I still stay at my apartment but I will go to their house often. During the weekend, whether I sleep at Bae house or Joohyun and Bubble will sleep at penthouse. That is our plan for now”

Irene, Solar and Eunji arrived at the restaurant. They take a sit beside their boyfriends then the gentlemen ordering their foods

“Are you all going back to the office after this or have another outside schedule?” ask Irene

“We will return to the office. No more schedule for the rest of the day. We only writing report for meeting next week” say Seungwan

“Alright, is anyone free this weekend?” ask Irene

“Me too” Moonbyul, Eunji and Seungwan say together

Their friends squeal “I will join” Seungwan say immediately

“Just tell us where and when we will meet”

Seulgi folds his arms on the table and leans comfortably. “Next weekend we will go home since Friday is a public holiday. Are you two go home too?” he looked at his buddies

“If Eunji go, I will go” say Seungwan

“If unnie need me to be there, I will go” Eunji smile mischievously to her boss

“I always need you beside me but this time if you go with us, you can enjoy your holiday with Seungwan and his family. Besides, it could be the first time you will meet with them as his girlfriend” Irene caressed her cousin’s hair softly

“You’re right, noona. My sister said her family will be back during public holiday so we can have family gathering” Seungwan wiggle his eyebrows while Eunji look shy as she thinking of meeting Seungwan family for the first time

Then Seulgi looked at Moonbyul “What about you and Solar noona?”

Moonbyul signals Solar to answer “If we’re not busy, we will go too. Let's see how it goes. We will inform both of you next week”

“I also will confirm again with you, Seul”

“So this weekend we will shopping and next week if everyone confirm will go back, we will depart together” say Irene

Irene, Seulgi and their friends meet at one of the shopping malls in Seoul. Before starting shopping, they decide to eat first. They go to a sushi restaurant at the mall since the girls want to eat Japanese food. The three musketeers only follow their girlfriend’s decision

“Unnie, who takes care of Hyunji at home?” Eunji ask after chewing her sushi

“Momma looks after her as usual. Sooyoung also at there with them”

“Oh, when did Sooyoung come to your house?”

“She came last night and spent her weekend with us. She is very happy to see Hyunji. We want to bring her along to shopping but she don’t want”

“Sooyoung loves kids so much. Bubble not whining at all when Sooyoung hold her” Seulgi added

“Sooyoung and Yerim are opposite to each other. I still remember when they met with baby Mark. Sooyoung played happily with Mark while Yerim non-stop teasing him. She end up scolded by your mom” Seungwan cackle when he remember his nephew often teased by the youngest Kang

The others also laughed lightly, “Kids in our neighborhood are so scared of Kang Yerim. No one dares to disturb her. She really a gangster” say Moonbyul

“You’re right noona. She is the leader of a children's gang in our neighborhood. Appa called her mafia” Seulgi chuckle ''I hope she is not teasing Bubble when they meet. I will seriously twist her ear”