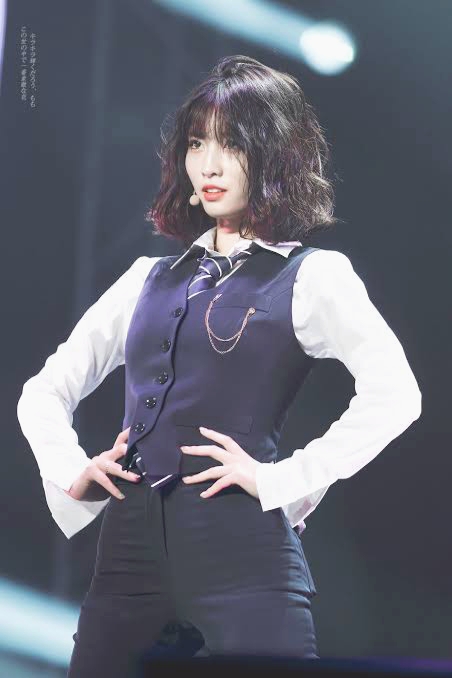 "Mr. Hirai, there's a girl here who wants to see you, says she doesn't have an appointment," momo's assistant, an older brunette lady with wrinkles from smiling and laughing so much, told him while cocking her hip.

He sighed, rubbing his face with the palm of his hand. The only reason people ever came to see him was for money or to get with him ually. He really didn't want to deal with this person today, but if he ignored it, this person could ruin his reputation. At least, make it worse than it was.

"Send them in," he grunted, turning back to his computer to finish his work.

He's been working on taking a smaller company down, and turning it into one of his own, except it was all the way across the country. That wouldn't be a problem for him, seeing as he has his own jet, but he needed someone reliable to run it.

He let out an oof as a blonde blur knocked him and his chair over, straddling him and kissing him all over his face.

He frowned, placing his hands on the tiny girl's back to steady himself. She was muttering something on the lines of thank god, thank you maybe. But why was she thanking him?

Then, she started letting out loud sobs, her wet tears hitting his neck. Four was completely confused. He stood up with the girl, placing her on his desk and picking up his fallen chair.

"I'm sorry," she smiled, the thing lighting up her features and he noticed just how beautiful she really was. She wiped her hand on her pants after drying her face with the offered tissue, "I'm myoui mina."

He took her tiny hand in his, loving how it fit and how warm it felt. "I'm hirai moguri," he said, looking down at her, wanting to brush the stray pieces of hair from her face.

"I know. I can't thank you enough for the donation. You don't know what that money means to me," she whispered, blushing slightly by recalling her actions. It was what mina would call five seconds of confidence.

"Donation," he muttered, racking his brain for where he put that money. "Daycare! Oh, love, you don't have to thank me. I take it you spent the money well?"

She gave him a big toothy grin that had him smiling slightly too. "I cleaned the place up, bought some new toys, and I'm building a playground."

"You're building the playground?" He asked, shocked.She didn't want to tell him it wasn't enough money to hire people to build it, that would be ridiculous. Instead, she directed the subject away. "You should come check it out."

"I will. Tomorrow is Saturday, but may I still come?" He didn't want to intrude, but he wanted to spend as much time with her as possible.

"Sure," the smile was glued to her face. It wasn't coming off for a while. "Do you need the location?"