The night fell in the long darkness

You came to me who was lost 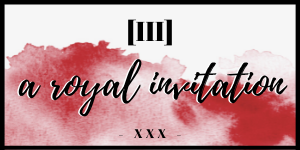 The hushed silence that fell upon the ballroom made him nervous. It was the first time he was performing in front of such a large, distinguished audience.

Being a newcomer to the kingdom, Kyuhyun would never have thought he'd be invited to the palace. But apparently, the newly crowned king had heard of their troupe, and was particularly interested in his act, one where he would sing with a flock of dancing doves. It was a quite spectacular sight to behold, if Kyuhyun were to say so himself, and would certainly fit well into an occasion such as this.

He cast a glance at his best friends, Shindong and Eunhyuk, who had tagged along to help with logistics. They flashed him reassuring grins, waiting for his signal to release the doves from their cages.

Kyuhyun took a steadying breath and looked towards the king. His performance had been announced but he felt it was only right to get the go-ahead from the royal himself. King Heechul sensed his intent and smiled, nodding his encouragement for Kyuhyun to begin. Permission granted, Kyuhyun snapped his fingers, and moments later, he heard the opening of cages, followed by flapping wings.

Above him, thirteen doves flew in circles, waiting for his cue. The audience twittered with excitement. Kyuhyun turned towards the orchestra and gave a nod to start. Sweet music began to swell, breaking the silence.

Sway, he commanded with a flick of his hand as he started to sing.

I was busy being chased

And running away with short breaths

I didn’t know how to calm my heart

That was pressing me on and about to burst

Why am I so young?

And why is the sky so high?

I jump tens and hundreds of times

But I’m still standing in the same place

You have on the biggest wings in the world

And you’re so beautiful

Now you can jump over everything,

The sky is spread out for beautiful you –

Tomorrow will definitely rise and shine

This moment shines with each and every color

That won’t ever come again is upon us

No one can stop us now

The world that is reflected in your eyes

Is speaking to me

We will overcome everything and go higher –

Feel the wind that is blowing

Tomorrow will definitely rise and shine

Kyuhyun ended his song with a sweeping flourish and was greeted with raucous applause. When he straightened, he saw that even King Heechul had gotten up to his feet, clapping enthusiastically.

He noticed then the two new figures who had flanked the king on each side.

The shorter of the two, who was clapping politely, was pretty in features, with short black hair styled in coarse waves. He filled out the royal outfit he was wearing, and it didn't need a genius to figure out he was closely related to the king, a brother perhaps.

The other one merely stood erect, hands clasped behind his back. Even from where he was standing Kyuhyun could see the person was beautiful. But he didn't seem to bear much resemblance to the other two, his features both simultaneously sharper and softer than theirs. His longish hair was also of a strange color, that of grey ash. Kyuhyun wondered at the man's relationship with the two royals, even though his outfit was similar to that of his shorter companion's.

His gaze was distant, expression stoic, as if his mind was elsewhere. Kyuhyun's pride took a hit; did his performance bore the other?

As if feeling Kyuhyun's eyes on him, the royal suddenly turned his head and they locked eyes for a moment.

Kyuhyun had the strangest feeling they'd met before.

"Ladies and gentlemen, give another round of applause for the wonderful performance by Agilis est Circus!"

The announcement forced Kyuhyun to look away, bowing to the audience with Shindong and Eunhyuk by his sides. When he raised his head again, his gaze flicked briefly to the royal who was now engaged in a conversation with the king.

"We're going to be sold out for days now, maybe even weeks!" Eunhyuk exclaimed excitedly.

They had packed up and were getting ready to leave. Their performance had marked the end of the coronation ball and the audience started dispersing after the king gave his closing speech and took his leave with his brothers.

Prince Jongwoon. The royal with grey ash hair was actually a brother of the king, the second son and current heir apparent.

Kyuhyun had noticed throughout the king's speech the prince looked visibly uncomfortable. He'd kept his gaze cast down, as if he didn't want anyone looking at him.

"We really strike it lucky this time," Shindong agreed, grinning.

"Let's go get something to eat at the tavern later. I'm starving," Kyuhyun suggested as they headed towards the entrance.

They stopped, turning round to find a tall, smartly dressed man approaching them. The man then gave a slight bow, smiling politely.

"My name is Hangeng, advisor to King Heechul. His Majesty has invited the three of you for a luncheon tomorrow. Here," he said, handing over a card.

Kyuhyun blinked, momentarily frozen by surprise. It was Shindong who took the card, which had the words 'Royal Invitation' embossed on it.

"T-thank you," Shindong said, bowing deeply. "This is such an honor!"

Seeing Eunhyuk dipping into a similar bow, Kyuhyun hastily followed suit, still not quite believing what had just happened.

The advisor chuckled as he implored them to straighten. "We will see you tomorrow then. Do not be late."

The three of them left the palace in dazed silence. They reached their encampment and were greeted by their fellow troupe members who were excited to know how the evening went. But Shindong sent them away, promising to share the juicy details the next day.

It was only later when the three of them were gathered at Shindong's makeshift office did the situation fully dawned upon them.

"Guys, we are invited to have a luncheon with the king tomorrow. Us! Us!" Eunhyuk squeaked in disbelief, pacing up and down the room.

"We don't have anything nice to wear," Shindong sighed, always the pragmatic one.

Kyuhyun tugged consciously at his clothes. His friend was right. They made enough to get by, and although they had good, clean clothes, they would still appear too shabby before the king.

And would Prince Jongwoon be there? Strangely, Kyuhyun found himself wanting to make a good impression.

"Maybe tomorrow we can go to a tailor and rent some nice clothes," he suggested.

Eunhyuk brightened at the idea. But Shindong, being the ringmaster and leader of their troupe, looked troubled.

"But hyung," Eunhyuk objected before he could, "we're going to sit at the same table with the king! We have to look as best as we can!"

Shindong rubbed at his temples. There was no way to refute Eunhyuk, of course.

"Hyung, think of it as an investment. After tonight I'm sure we will have more people coming to our shows," Kyuhyun tried to reason. "And we can always take on extra jobs. I'll sell my remedies at the market or offer private singing lessons. Eunhyuk hyung can sell his famous tomato egg noodles. You can fix anything for a fee."

Shindong had a speculative look in his eyes. "But that might mean we will have to stay longer in the city in order to make back what we've spent."

Kyuhyun stared at his friend, knowing what it was the other was implying. Eunhyuk was also watching him. "We'll cross the bridge when we get there," was all he could say.

They decided against going to the tavern and went to bed early. But Kyuhyun was still wide awake even though Eunhyuk had long succumbed to sleep. Excited as he was for the luncheon opportunity, he wondered if it would be alright to delay things a little.

It should be fine, right?

He fervently hoped so.

And so we have finally come to the final unit i.e the Versatile unit. So to refresh your memory, we have:

I'm also including the other members of Super Junior.  "Even if it is added or excluded, Super Junior is still SUPER JUNIOR."

If you miss the guidelines in Foreword, do note that:

2) Characters retain their Korean names and for the sake of familiarity, also retain certain Korean etiquette and honorifics