As the wind gets stronger

It's gorgeous, you and me 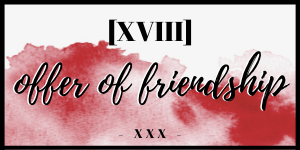 Ryeowook didn’t come in late today; in fact, they’d arrived at the music room at the same time and headed together to the seating area where Kyuhyun was waiting. And without a preamble, his brother had announced to the latter that they were to be friends.

Jongwoon had watched with concealed mirth as Kyuhyun struggled to understand the situation. Really, the other was always rather amusing when he seemed out of depth, and he had looked to Jongwoon for some sort of verification. Jongwoon had merely shrugged, trying hard not to burst out laughing at the bewildered expression on Kyuhyun’s face.

It was even funnier when Ryeowook suggested a drop in the honorifics, giving Kyuhyun permission to call him by his name instead. That brought about a stricken look and Jongwoon could guess the other was thinking about possible punishments that came with disrespecting a royal.

Kyuhyun had sputtered and stuttered, refusing as politely as he could. That made Ryeowook sulky, and his brother could be quite a nightmare to appease when in such a mood. So now Jongwoon had to step in, assuring Kyuhyun that Ryeowook really did want them to be friends.

It was a genuine question on Kyuhyun’s part. Indeed, why would a royal offer friendship to a mere commoner? There couldn’t be any possible benefit from befriending someone of a lower station; if anything, the one to gain from such a friendship would be the commoner. So it was only natural Kyuhyun would like to know the reason behind such an offer.

“Ryeowook feels comfortable around you. You’re both of the same age. And from what I’ve observed, the two of you have been interacting as if you’ve known each other for long. So why shouldn’t you and he be friends?”

“That doesn’t bother me one bit,” Ryeowook said, pouting slightly.

“Apologies for being blunt, Your Highness, but it bothers me!” Kyuhyun exclaimed, voice raised, and it was clear this was the underlying issue. “If I overstep my boundaries without realizing it, who’s to say I won’t be finding myself sent to the gallows?”

Jongwoon inwardly winced, just as Ryeowook gasped out loud. He wondered if that was how their subjects view them as well. Did they similarly think the royal family would be quick to throw anyone to death’s door? He’d thought his father had ruled benevolently, and they were brought up with the worldview that their power and status were both a privilege and responsibility, not something to abuse.

But then he was reminded of the night he first encountered Siwon in the stables. He had threatened to have the man executed had Leo bolted off. Not his best moment and he was terribly ashamed of it. So perhaps Kyuhyun had a valid point indeed.

“No, Kyuhyun-ssi, please don’t think like that!” Ryeowook was saying. “I really just want us to be friends. When we are together, I’m just Ryeowook to you and you’re just Kyuhyun to me. That’s it. And even if we have disagreements, we’ll resolve them as friends do, I promise.”

Ryeowook’s sincere plea seemed to work, for there was a softening in Kyuhyun’s expression. It was an unguarded moment, a drop in his defenses, and Jongwoon found that such a look was better suited on the other.

“Has Ryeowook ever made you feel uncomfortable?”

His question had Kyuhyun turning to him with a start. “No, never!” His gaze darted back to Ryeowook. “You have been nothing but gracious to me, Your Highness.”

Jongwoon smiled. “Then trust that he’ll continue to be gracious to you.” He reached out to pinch his brother’s cheek fondly. “Ryeowook is the kindest person I know, so he’ll be a good friend to you as well, I’m sure.”

They both looked expectantly at Kyuhyun. The other’s gaze flitted between them, then he sighed, and nodded his head.

Ryeowook suddenly stood up and crossed over to Kyuhyun, who managed to get to his feet in time just as he was enveloped in his brother’s enthusiastic hug. “I’m so glad, Kyuhyun-ah!”

Jongwoon couldn’t help laughing at the shocked expression on Kyuhyun’s face and the way he had to keep himself upright, arms awkwardly stiff by his sides, eyes were full-blown as they met Jongwoon’s over Ryeowook’s shoulders.

Ryeowook released Kyuhyun then and linked arms with the latter. Such a pure soul his brother was, no qualms about getting familiar with those he had given his trust to.

“And I’m sure you will make a good friend as well,” Ryeowook said to him with an impish smile. “Why don’t you let Kyuhyunie call you ‘hyungnim’?”

Jongwoon's laughter died in his throat then. Did he really just think his baby brother was pure? Bugger that, he was a little devil!

His eyes met Kyuhyun’s and the younger had that guarded expression back up again. He didn’t like it. Not at all. And he realized he wanted Kyuhyun to be comfortable around him too, not just with Ryeowook. Perhaps selfishly also, when things would be different between him and Siwon once his identity was discovered, at the very least he’d still have a ‘passing ship’ in Kyuhyun for however long the other would be in Formosus.

“No, you’re supposed to call me Ryeowook,” his brother cut in, unperturbed, which made Jongwoon realize this was a calculated move. Just as how Ryeowook had orchestrated him having to deal with Kyuhyun the past two lessons on his own, the minx was again trying to cultivate some sort of bond between them.

“Right, of course… Um, Ryeowook-nim, I don’t think we should impose on Prince Jongwoon as such.”

His brother narrowed his eyes at Kyuhyun, pouting slightly. “Firstly, just ‘Ryeowook’ will suffice. Secondly, isn’t it natural to address your friend’s older brother as hyungnim?”

The look on Kyuhyun’s face clearly conveyed he did not think it was natural at all in this particular instance. Jongwoon stifled a sigh. Although what Ryeowook did was presumptuous and annoying, he didn’t have it in him to be upset. After all, he’d already told Kyuhyun the last time they met that he considered him as amongst the people in his life he’d prefer having genuine interactions with.

Rolling his eyes, Jongwoon got to his feet and approached the two. He pinched his brother’s cheek, putting a little more strength for good measure that made the other yelped slightly. “You...” he sighed, and that was all he could say.

Ryeowook rubbed at his cheek. “So mean, hyung.”

“Go get the piano set up. I’d like to speak to Kyuhyun for a bit.”

Ryeowook’s gaze flitted briefly between them and a knowing smile appeared on his face. But he didn’t say anything, merely unlinked his arm from Kyuhyun’s and giving the other a sort of solitary pat on the shoulder before moving off.

His eyes trailed after his brother, and once out of earshot, Jongwoon turned back to Kyuhyun. “Listen, about Ryeowook --”

“Your Highness, I’m sorry,” the other interjected, head bowed. “I should have been more firm with Prince Ryeowook.”

“On what?” Jongwoon asked, puzzled. “About being his friend? And look up, please.”

Kyuhyun did as told, drawing to his full height. Jongwoon noted absently how they didn’t have much of a height difference, not as noticeable as he and Siwon at least, but all the same, he had to keep his gaze slightly raised when maintaining eye contact.

The younger’s doe-like eyes were really big and pretty, like Heechul’s.

“No, I meant about addressing you informally.”

It took Jongwoon a moment to get what Kyuhyun was saying. He narrowed his eyes, feeling a little upset. “Why? Is it burdensome for you to be calling me ‘hyungnim’?”

Kyuhyun quickly shook his head. “No, no, I…” he trailed off, looking a little embarrassed. “I’m actually honored to be given the privilege.  It’s just… I didn’t want you to be uncomfortable about it.”

Uncomfortable. It was the second time Kyuhyun had used the word for him. Jongwoon felt a rush of warmth, gratitude perhaps, at the other’s regard for him. He softened his tone as he spoke. “I’m allowing you to call me ‘hyungnim’ because I truly do not mind. You should know I'm someone who, if I say no, it means no. And Ryeowook knows that." He smiled. "On that note, I hope you’ll excuse him for what he’s done. He has a good heart but he can be quite cavalier sometimes.”

Jongwoon chuckled. “Well, then, I wish you the best of luck in dealing with him.”

That had the other smiling. “Thank you. I’m sure I’ll need it.”

The teasing sarcasm pleased him; this was how he’d like Kyuhyun to be around him. Unthinking, he reached out to squeeze Kyuhyun’s forearm. “Come, let’s start the lesson. And since you’re friends now, don’t hold back in scolding him.”

Kyuhyun's eyes widened as he realized his blunder. “I mean, uh... yes, hyungnim.”

Hyungnim. It’d been so long since someone new addressed him as such. And it flitted briefly across Jongwoon’s mind how it sounded almost right coming from Kyuhyun.

cavalier - without much thought or consideration