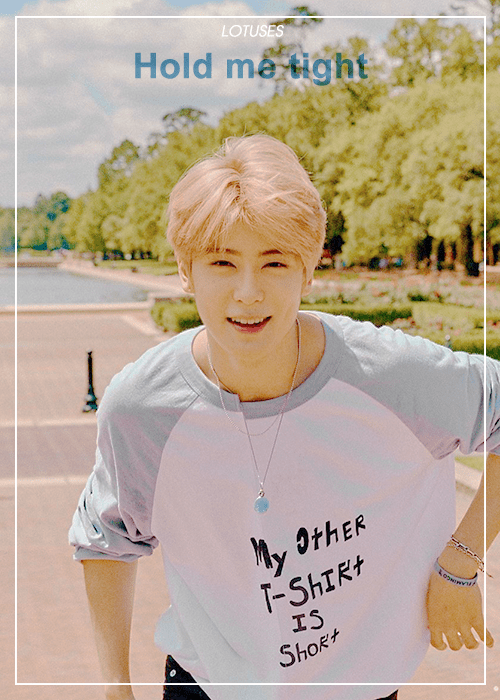 You were running around your room looking for your bottle of sunscreen. Everything else was packed – the food, first aid, a blanket, your camera, a jacket, just in case, and underwear to change back into. Your phone started ringing. He’s here already, you thought.

Panic was plain on your face. ‘I’ll be there in a sec, I need to find something.’

‘Take your time,’ he laughed. ‘The beach isn’t going anywhere.’

You said goodbye and ended the call. Where is the sunscreen? You groaned. Whatever. You grabbed your bags and left your apartment. You managed to slam the door to the lift on your way to the building’s entrance. Just a bit longer and we’ll be enjoying ourselves in the sun. Jaehyun was waiting for your in his car. He lowered his sunglasses when he saw you approaching.

‘Looking good, babe!’ he shouted, flashing you a smile.

You threw him a sideways glance and opened the trunk. You put the contents of your food bag into the thermal insulated boxes – grilled sandwiches with turkey and Arugula cheese, an assortment of tangerines, sliced cantaloupes and pineapple, strawberries, pomegranates, pastries filled with cheese, soft-boiled eggs and bacon, potato bread and a plate of honey-roasted ribs.

Jaehyun had already bought the drinks, mostly green tea and cherry Coke, a few bottles of water, a small bottle of white wine, and handfuls of crisps. Not scattered crisps, they were in their bags.

You grabbed a large bottle of water, and a small container of berries to eat in the car. You placed the bottle at your feet, and the berries on your lap, then turned to kiss your boyfriend.

‘Are these for me?’ he asked, looking at the fruits.

‘For both of us. Sharing is caring.’ you retorted, placing a strawberry in your mouth. Jaehyun leaned closer to you and opened his mouth. He waited. No berries came.

‘I thought you said sharing is caring?’ he raised an eyebrow at you.

‘Focus on the road.’ you replied, reaching for another strawberry. This one was for him.

‘Hard to do on an empty stomach.’ It’s not empty now.

‘Do you know how to get there?’

‘Yeah, I’ve looked at the directions on Google last night. Worst case scenario, we bring the GPS out.’ He tapped the glove box and opened his mouth again. ‘More, please.’

A couple of hours later you passed the sign that welcomed you to Sokcho. It was nice to leave Seoul once in a while, and this time you both happened to be free. You drove around the city for ten more minutes before finding your way to the beach.

‘It’s really hot out,’ you said, looking at your phone.

‘Why? What’s the temperature?’ questioned Jaehyun, checking the wing mirror as he turned into the car park.

‘32 degrees. And I forgot the sunscreen at home.’

‘Guess we’ll have to stay in the shade and go somewhere else after a while.’

‘We’ll figure it out after we eat.’

After Jaehyun parked, you got your bags and headed for the beach. There were a lot of people there already. Jaehyun furrowed his eyebrows and looked around.

‘There’s no empty chairs with umbrellas.’ He said.

He dropped the bags on the sand and turned to you. You lowered your hand from your forehead and squinted.

‘What’s that other place you wanted to go to?’

Jaehyun pursed his lips and took his phone out.

‘Apparently…’ he paused to scroll, ‘there’s a national park 15 minutes away from here. It says there’s plenty of pine trees there.’

You shrugged and picked up the food boxes. ‘Let’s go.’

Jaehyun wiped his forehead before he started the engine.

‘Can you check the directions to the Seoraksan park?’

The 15-minute trip took you half an hour. Armed with food and blankets, you discovered at the gate that eating in the park was not allowed and that you had to make for the picnic designated area.

I feel like I’m going to suffocate, thought Jaehyun. How much longer? He threw a hopeless look at you, who returned a warm smile.

The two of you found a picnic table under some trees and set your boxes on the table. Jaehyun grabbed a Coke, and you watched as he finished his drink in less than a minute.

‘Did you enjoy that?’ he raised an eyebrow.

You ignored his question, and started taking the food out. Soon enough you were indulging in the sandwiches. You were about to take another bite when a sparrow started pecking at your berries. Your eyes widened, and met Jaehyun’s. He chuckled and continued eating. When you were done, Jaehyun spread his body on the bench and closed his eyes.

You were flicking through one of the leaflets you grabbed at the gate. ‘That’s too bad,’ you said, still looking through the guide. ‘It seems like there’s a waterfall on the other side of the park. And you have otters!’

‘Otters in the waterfall?’ Jaehyun snickered.

You shook your head. ‘Otters in the mountain’s streams.’

‘I doubt I have any space left for an otter.’

You slammed your leaflet ‘Jaehyun!’

He opened his eyes, and stood upright. ‘I was joking,’ he said, raising his hands.

‘Let’s check that waterfall, shall we?’

‘I thought you said you couldn’t get up.’

After another trip to the car where you left the now empty food boxes, you returned to the park’s main entrance.

‘It appears like we’ll have to walk for 40 minutes before we reach it.’ You said, not looking up from your guide.

Jaehyun nodded, taking the scenery in.

‘Babe,’ he tapped your shoulder, causing you to look at him.

He shook his head at pointed at the bronze statue of Buddha ahead of them.

Jaehyun grabbed your hand and ran to the statue.

The walk to the waterfall was tiring, but at least you enjoyed the mountain’s breeze. Following the path indicated by the signs, you found yourselves not in a forest, but a rock ridden area. You rushed to the edge of the waterfall and exclaimed at the sight.

‘Not as beautiful as you.’ said your boyfriend, hugging you from behind. You twisted your face and mouthed an ‘Ew’ at him.

‘What? Don’t you enjoy my cheese?’ With that he picked you up and threatened to throw you in the basin.

‘You’re walking with queso, Jaehyun.’ You crinkled your nose. With that, he threw you in the water.

‘You would’ve been wet too had we stayed at the beach.’

‘I don’t believe we’re allowed to be in here.’

‘Then let’s make the most of it while we can.’

Jaehyun grabbed your face, and placed his lips against yours. Your arms wrapped around his shoulders, and deepened the kiss. Only a few sounds could be heard – the water splashing against the rocks, and the birds singing.

You smiled and brought your forehead against his.

‘Why are you smiling,’ he whispered ‘is it because you’re kissing a handsome man like me?’

You slapped his chest, and laughed. This caused Jaehyun to grab you by the waist. He bit his bottom lip and looked down at you. He went for another kiss. Your hands went to his chest, while his were moving up and down your hips. You moaned at his touch, and grabbed his T-shirt.

Your kiss was quickly brought to an end by a guard shouting.

‘What are you kids doing there? Get out of the waterfall!’ He is fuming.

Taking your hand, he made for the path, leaving the guard scratching his head.

‘That was close.’ you laughed.

‘It was.’ he agreed, kissing your forehead.