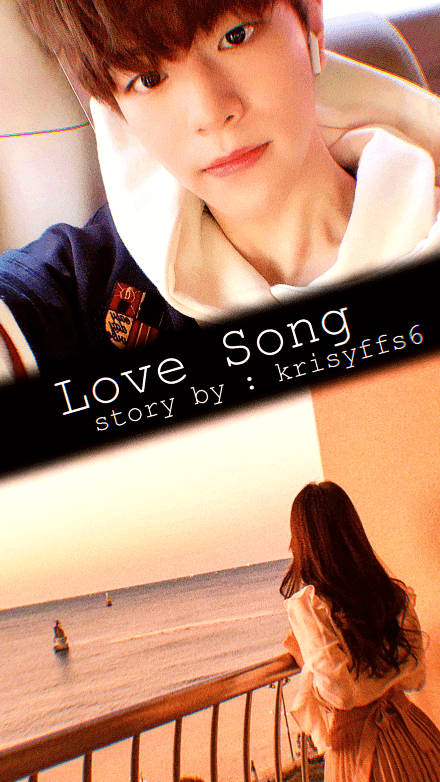 A boy who fell in love in first sight. He actully never got close to her, but sometimes they talk only when they get paired up together.

Why did he love that girl? Well..it was because of her beauty and personallity, she was a kind and nice girl.

But how could he go up to her when there's always boys around her? She's the popular kid that every boy's are being crazy over.

Not until he wrote a song to confess.

"Good morning class!" The teacher greeted, "Good morning Mr. Kim!" The whole class greeted back. Mr. Kim smiled as he spoke, "Today! We're gonna be having a new student today," Everyone's attention went towards the girl who was standing besides Mr. Kim. "Could you please introduce yourself?" Mr. Kim asked the girl and she nodded. "Hello everyone, my nameis Han Sooyun. Pleased to meet you all, I hope that we could all become best friends." She smiled and boys were melting on the inside. "Okay Sooyun, could you please sit next to Jisung? Jisung, raise your hand!" Jisung raised his hand with a smile as Sooyun smiled back. Jisung and Sooyun are siblings but got seperated because of a divorce. Sooyun went with their dad as Jisung went with their mom, Sooyun and Jisung has always been in touch with each other. Anyways back into the story, Sooyun went and sat besides Jisung with a smile. "Nice to see you again, sis!" Jisung whispered and Sooyun giggled, "Me too." She responded back to him as they smiled at each other. Just then they faced front to focus on the lessons...

Sooyun was packing up when Jisung came towards her with other boys. "Oh, hey Jisung. Who are they?" Sooyun softly asked smiling, "These are my friends! Felix, Changbin, Jeongin, Hyunjin and Seungmin!" Jisung responded back with a smile. Sooyun bowed 90 degrees and then back up, "Nice to meet you all." Sooyun greeted. "Nice to meet you too!" All but except Seungmin and Jisung said, "Hello~ Earth to Seungmin!" Jisung waved his hand infront of Seungmin's face as Seungmin came back to reality. Seungmin looked around and then back to Sooyun, "U-Uh..nice to meet you too.." He said shyly. Sooyun smiled at him. Jisung nugde onto Seungmin teasing him while whispering, "Someone has a crush~" Seungmin slightly blushed and hid his face a little. "Is anything wrong Seungmin ssi?" Sooyun asked him and he nodded. "Don't mind him noona! He's shy around new girls." Jeongin told Sooyun and Sooyun giggled, "Well..we should get going. I'll buy us all food. My treat!" "NO! I'll do it since I'm such a gentlemen~" Hyunjin pointed at himself with a smile on his face. Felix rolled his eyes as he sopke, "You're sooo..dumb. Just because of your personallity and handsomeness doesn't mean she's gonna fall in love with you dummy.." "SHUT UP!" Hyunjin yelled as they boy started bickering. "Sorry sis..they're usually like this." Jisung told her and she nodded awkwardly walking towards the cafeteria.

"Really dude! Just confess already or I take her away from you!" Changbin yelled at Seungmin, "I can't! I'm too nervous..what if she doesn't like me back?" Seungmin reply back. Changbin and Seungmin were talking trough the phone since they couldn't meet up with each other. Changbin sighed, "Just because she's popular already in school and she always rejects boys, doesn't mean to she doesn't have feelings for someone~ Besides! what if she also likes you that's why she always regect those boys?" Seungmin sighed. "I just don't know anymore hyung...I feel like giving up already.." Seungmin told Changbin and Changbin ended the call. "Changbin? Changbin!?" Seungmin looked at his phone seeing that Changbin already ended the call, "UGH!"

"Did you wanna tell me anything?" Sooyun asked the boy infront of her, "Uhm..I don't know how to say this but...I-I...I LOVE YOU!" Sooyun sighed, "I'm sorry but..you'll always know my answer." The boy nodded, "I understand..w-we could atleast be friends..right?" "Again with the "we could still befriends"" "Y-Yeah..bye." Sooyun said and walked away leaving the boy behind. She walked into the classroom seeing Jisung. Sooyun sat next to him, "Anything wrong?" He noticed her. Sooyun sighed and put her head down. "Another confession..10 days in a row.." Sooyun replied back to Jisung, Jisung sighed. "It's because your too beautiful for them." She chuckled and spoke, "How am I supposed to say this to him.." Jisung closed his book putting it on the side of his desk and looked at Sooyun, "Who? Seungmin?" Sooyun nodded with a sigh and looked at her brother while still having her head down.."Maybe try tomorrow?" Jisung told her, "HOW!? Boys are always surrounding me and I can't get to him.." She sighed, "Well...then too bad!" Jisung told her. Sooyun sighed.