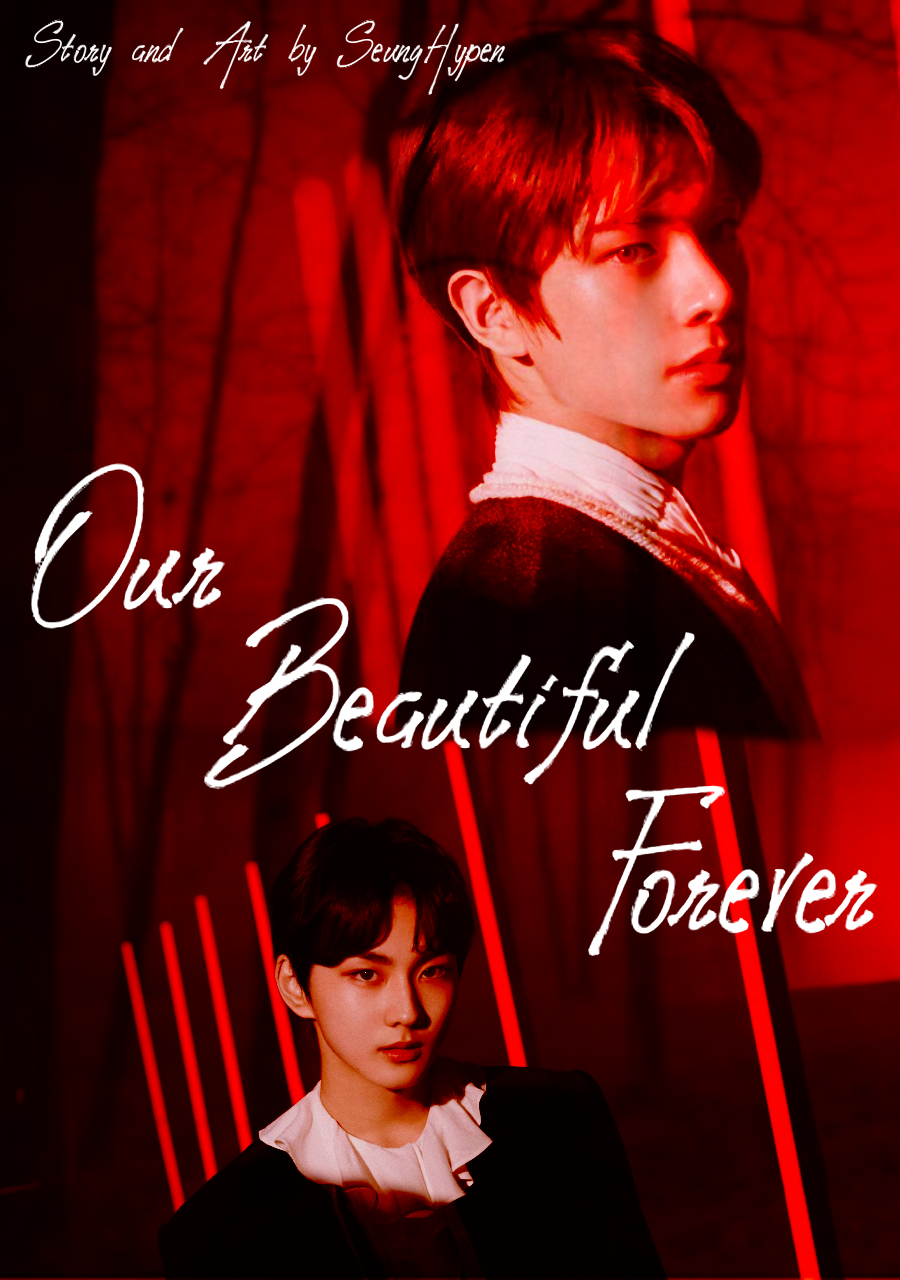 Jungwon walked through the rain, not caring as he got thoroughly soaked. It's not like he could feel it anyway. For as long as he could remember this had been the case. He felt nothing, desired nothing, was nothing. He was cursed. His mother had so graciously deemed it important enough to tell him as she lay dying in the hospital. At first he'd assumed this was another of her badly timed jokes, but when her last breath left her lips and she hadn't said it was all part of some elaborate prank, he could do nothing else but assume she was being serious.

"A friend of your father's started studying magic a long time ago. She had originally been intending to study light magic, magic for good, but she got persuaded too easily to study dark magic. Your father tried to stop her before she got too powerful, and he was successful, but not before she cast a curse. It was meant for your father, but he died along with her, passing the curse onto you." She'd said.

"A curse?" He'd replied. For a second he contemplated what that meant. He knew there was something wrong with him, he wasn't like all the other kids at school. They were so different, they did things that he couldn't explain, things that he asked his mother about and she just blew it off as them being strange. But how could everyone else be strange and only him be normal? It just didn't make sense.

"You asked me why you are different than everyone else? That's because they feel things you cannot. They aren't numb like you. They get frustrated, angry, happy. I know you probably don't understand." She paused. "Have you ever felt the rain against you face, been afraid of thunder, worried about eating or sleeping? Those are things that other people do that you can't."

And then she was gone, her last breath spent explaining something that he should have known about long ago.

All around him other students rushed forward, their bags and umbrellas above their heads, feet splashing in puddles as they ran. Jungwon wondered what was going through their minds, what the rain felt like, if it scared them and that's why they ran. A loud crash of thunder caused a girl in front of him to jump and run faster, bag bouncing violently on her back. She made it to the doors and rushed inside, disappearing down the hallway in the blink of an eye.

The bell signaling the start of classes chimed loudly throughout the school just as Jungwon took his seat, slamming down a little harder than he'd meant to. His classmates spared him a moment's glance before returning to their conversations about the previous day's homework. This was nothing out of the ordinary, his classmates found him strange, something a teacher had so kindly pointed out for him. Jungwon was certain she found him strange as well from his indifferent reaction. Should he be offended? Worried? Scared? Of course no one but himself was aware of his uncertainty regarding emotions, and no one ever would be. He knew he would be numb forever, never feel anything, not the rain, the sun, the pain or exhaustion that everyone around him experienced.

"Sit down everyone." The teacher said as he entered the room.

The few students that were huddled around desks chatting away, halted their conversations and rushed to their seats. The sound of shuffling paper and chairs scraping the floor filled the room before it went silent.

"Today we are going to talk about..."

Jungwon didn't listen. There wasn't a point, not when he had all the time in the world after school. With no friends, no job and just no social life in general, Jungwon didn't mind taking the time to learn things by himself. In school he pretended to listen well, but really, he rarely heard a word. His grades were average and he didn't stand out, just the way he liked it... Well if he could like things he would. He knew he would.

Growing up he had studied emotions in several dictionaries, doing his best to understand them despite not being able to feel them himself. Liking something was finding it comfortable, pleasing and convenient. One could feel it about objects, routines or even people. Liking a person was called a crush and apparently could start happening from as early an age as an elementary schooler. Liking an object or routine didn't have a separate name and people seemed to talk about it less. Jungwon had never figured that part out. What made a person liking another person more interesting a conversation topic? How did someone come to like someone else? And the obvious one; what did it feel like?

In no time at all his first three classes were over and his classmates rushed out to get to the cafeteria for lunch. Jungwon, like usual, stayed behind, pulled his sack lunch out of his backpack and ate at his desk, trying not to eavesdrop in on the conversation of the few students who remained in the classroom with him. They weren't talking about anything useful anyway, just their crushes and who was dating who. It seemed like all they did was gossip. Lunch passed quickly as well and then it was time for classes to resume. His classmates came back and sat down, tired from their meals and not at all ready to listen to three more hours of teachers drone on about things they did not care about. He assumed many of them did as he did, pretended to listen.

"And that concludes today's lesson. Please use the remaining time to work on your homework."

Jungwon sighed, something he had heard his classmates do many times and had learned meant they were tired, irritated, or were just feeling down in the dumps. He of course felt none of these things, but sighed fairly regularly to seem more like everone else. Voices filled the room as soon as the teacher left and Jungwon wasn't surprised. His entire class was filled with procrastinators, only a few students were actually hard workers. Jungwon was sort of one of them. He worked on his homework some days, and other days he laid his head down and did his best to ignore the world around him. Today, he decided to do just that. He crossed his arms across the desk and laid his head down, letting his eyes close. At times like this he wished he could get to sleep easily, not have to will himself like he always did, but when you don't feel sleepyness, it can be hard to fall asleep.

The bell rang and something spread across Jungwon's chest, something that had him grabbing at his shirt looking for it. There was nothing there, and even if there was he shouldn't have been able to feel it, so what was happening? He let out a loud breath and decided it would be best not to make a big deal out of it and made his way out of the classroom at a reasonable pace. The further down the hallway he got, the more intense his strange chest sensation got. With the hallways mostly empty, and those remaining more interested in getting to their clubs or heading home, Jungwon looked frantically around, hand held to his chest. It felt like what he assumed being on fire would be like, but he still had no idea what was happening. As calmly as he could he made his way out of the building, going down the stairs and heading towards the school sign. The feeling was only getting more intense and starting to spread over his entire body. When he made it to the sign the feeling was so intense that he had to bite down hard onto his lip to keep himself from crying out. He looked around again, making sure no one was paying him any attention when he spotted him. Across the road, a boy, probably around his age, stood, looking up at the school with a strange expression. Jungwon would describe it as curious and pained, sort of like how he assumed he would feel in the current situation, but as he looked at the boy, he noticed the sensation was fading. His body and chest were almost back to normal. He couldn't take his eyes off the strange boy. He was hypnotized.

Even from afar Jungwon could tell that the boy was the definition of handsome. His light brown hair was fluffy and hanging so low it almost covered his eyes, but Jungwon could still see them, wide and frantic, yet beautiful. He was pretty tall and had his hands balled into fists at his side. The outfit he was wearing was somehow flashy but didn't stand out, and the colors looked really good on him. He scanned the building behind Jungwon, seeming to be looking for something. What could it be? Who was this boy? What was he looking for? What business did he have with the school? Then it came to him, the feeling he should be feeling from seeing the guy and the strange sensation... Hope. He should be hoping that this man was in some way related to the curse. It was a stretch and he knew it, but he couldn't help but wonder.

The boy's expression changed, from curious and pained, to frustrated and pained. It seemed like he was forcing himself to stay, though Jungwon had no idea why, nor did he know if this boy had something to do with his strange experience. He honestly didn't want to think about it too much, at least not at the moment. He just wanted to go home and do his homework, but he was rooted in place, just like the boy, until suddenly he wasn't. Without warning the boy jerked to the side and started walking away and Jungwon was able to move again too, like some force that had been holding him there had lifted. He sighed again out of habit and continued his walk home, heading straight to his desk when he got there. He spread out his homework, but instead of working on it, he just sat there and replayed the days events in his head, over and over. The strange sensation, was it a feeling? All he knew was that it was something he hadn't experienced before, and if he could be afraid, he would be. Thoughts raced through his mind before he could even process them and before he knew it there was light shining in through the curtains.

He had stayed up all night...