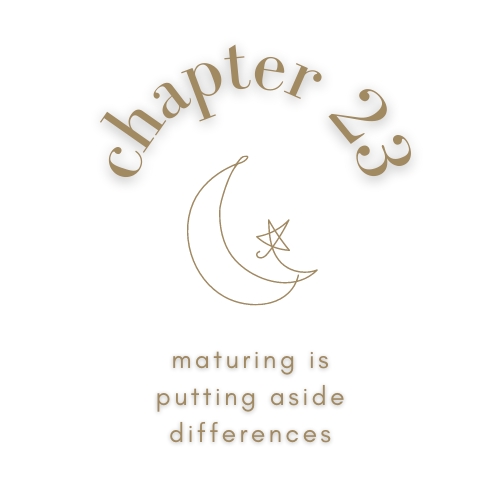 “You know him,” Seulgi surmises. Noeul knows exactly who her friend is talking about. She thinks back to what might have given it away. How long has Seulgi been lingering by? She had to have caught Baekhyun right before he slipped into the locker rooms. Seulgi falls into step beside Noeul as they begin back to their dorms from the stadium.

Just this entire week alone, Noeul feels like she shed an eternal amount of tears, yet, in perspective, leaving her surprisingly calm and clear-headed. She nods gently, focusing on the sidewalk. There was simply no point in lying to anyone. Noeul couldn’t convince herself, so how could she expect to be believable to other people? “We went to the same high school.”

“Why didn’t you say anything then?” Seulgi asks. It wasn’t irritation that was in her tone—just curiosity.

Noeul doesn’t answer for a beat. “Because it didn’t feel like I had the right to.”

“Did he hurt you in any way?” It was endearing. Really. How much concern Seulgi had for her.

It made Noeul feel some relief. She wasn’t truly alone anyway. It did beg the question of whether Noeul deserved this or not. “No, he didn’t. I hurt him.”

Noeul gazes at Seulgi who doesn’t look all that bothered. Her statement had been lighthearted more than accusing. “Yeah, I am.”

“But maybe you should lay off the self-blame.”

Noeul peruses this thought. “We’re having the same conversation?”

Seulgi snorts. “You made your bed, Noeul. Whatever decision you made—I’m sure you had your reasons. It may hurt like a for both parties, but if you’re so sure about it, then there’s no use blaming yourself. It’s just counterintuitive.”

“I don’t know what the hell I’m doing,” Noeul admits.

Seulgi levels a look at her. “Huh. I could’ve sworn you looked like you had it figured out.”

“I thought I did,” she answers hesitantly. “But, now, after seeing him again, I’m not so sure.”

Seulgi nudges Noeul’s shoulders playfully. “You should probably sort that out.”

“You’re awfully casual about this, Seul.”

To which the other girl simply shrugs in her direction. “If this is how I get you to talk, so be it.”

“I definitely think you should double major in psychology,” Noeul says with a smile. She felt so much better, which was surprising considering just an hour ago, it felt like the world was ending in a fiery ball of hell. It was an understatement, to say the least.

The sting of Baekhyun’s words didn’t feel as ty as it did earlier. She had Seulgi after all. For some reason, the girl still chose to stick around even after knowing how unapproachable Noeul was.

“Noeul,” Seulgi calls out. “Do you think you’ll ever be happy?”

It feels a lot like rhetoric. Noeul didn’t have the answer to that. Was Seulgi referring to how she would deal with her disorder or whatever else disarray she had lined up? What did happiness feel like? It certainly wasn’t what she was doing to herself now. Denying the only person that ever felt like home to her.

“How about you?” Noeul decides to ask. For the first time, she wasn’t equivocating or deflecting. Noeul was genuinely curious about Seulgi’s answer.

“I don’t think anyone seriously knows the answer to the question,” Seulgi replies, mischief shimmering in her eyes. “But I think we should let ourselves be happy. Self-validation is a lot more powerful than you think.”

“Do you think I can be that person?”

Seulgi slowly deliberates this. “Do you love yourself Noeul?”

“Everyone says self-love is the first step toward acceptance. It’s easier said than done. I mean—if you seriously think about it, what does that even entail?”

Noeul bounces a curled knuckle against as she replays Baekhyun’s words in her head like a broken cassette tape. “He says I don’t know how to love.” It was supposed to be a neutral statement—at least, that’s how she wanted to sound, but Noeul couldn’t hide the hurt in her voice.

Seulgi doesn’t laugh, and Noeul finds comfort in that. “From what I know, your parents were s. You have a major case of an ambivalent attachment style. Your childhood checks all the boxes of child psychopathy. Honestly. I don’t really blame you, babes. I’m glad you didn’t resort to killing people or something.”

Noeul remains silent—a tiny smile of relief playing on her lips, and Seulgi manages to slip her arms around the girl, hugging her gently. “But you know what? Just because you don’t know how to love doesn’t mean that you don’t deserve love from other people. I love you plenty.”

Before she realizes it, there’s a wide smile on her lips. “I love you too, Seul.” Before she met Seulgi, Noeul was drowning, and now—Seulgi was the person who stuck out her hand to pull Noeul up from the bottom of that deep, dark ocean.

“Now, how do you feel about movie marathoning and ice cream?”

“Hey, sweetheart. I know you’re coming next week for Thanksgiving, but is there any way you can come a week earlier?” For Noeul, it was only nine PM because she was on the west coast, but it had to be close to midnight for Junmyeon.

Noeul doesn’t think twice. “Yeah, I can probably ask my professors for work in advance. I’ll check with the school. Is everything okay over there?”

Despite being thousands of miles away, Noeul can hear the exhaustion in Junmyeon’s voice. Even in high school, dealing with a bunch of her douchebag classmates, Junmyeon showed up to class with a playful smile. She couldn’t hear any of that in his voice.

There’s an uneasiness that spreads deep and bleeds into her brain. Dread trickling in her system like being pulled under by quicksand.

“It’s Luhan. He’s—uh—“ Junmyeon’s voice breaks before he clears it and calmly continues, “it’s just a precaution, but I think you should be here.”

Noeul’s heart shatters. Right there and then. She swallows down the bulk of hysteria and panic. “Y-yeah, of course, I’ll be there within tomorrow. I’m gonna leave for the airport now.”

Hearing the familiar endearment, Noeul feels rueful. And she has to will herself not to cry.

“I love you, Junmyeon,” she whispers, her words barely audible.

Yet, he hears her, and he tenderly reciprocates, “I love you too, Noeul. I’ll see you soon, okay?”

Noeul is in the middle of packing—just about done. Her tremors, mixed with anxiety, made it harder to fold her clothes, but thankfully, Seulgi gave her some words of encouragement and as much support as she could.

With the help of her friend, she lugs her suitcase and her purse, heading straight for the door. When Noeul pulls it open, she does a double-take. Her heart skipping to a full stop.

Baekhyun is standing right in front of her with his hand mid-air like she had interrupted him just before he had the chance to land knocks on her door. He clears his throat, his eyes unsteady. For the first time, he couldn’t look at her.

As ed up as this sounds, she finds some comfort in seeing him as messed up as her—sporting disheveled hair and wrinkled clothes like he didn’t give a single thought before he ran straight to her.

The minute she saw him, with everything going on, Noeul lost her mind. She wasn’t herself, so what she did next was the opposite of what she should have done. It wasn’t logical, but it.

Noeul lets out a choked cry, practically throwing herself at him. But he doesn’t hesitate to catch her when he pulls her closer. So close that she can in fact feel his nose rubbing against her neck. The inhale of relief as he takes her in.

She clings to him. For the first time, feeling relieved to have somewhat of a connection to Luhan—to her hometown. To her past life. He was right here.

“Come on,” he ushers gently. “The taxi’s waiting downstairs.”

Noeul slowly releases herself from him, feeling completely drained. She was so tired of this. So tired of the bad news that comes so suddenly, taking everything she loved away. How much more of this could she take? Noeul could barely hold herself together. She was being worn down so thin.

Baekhyun walks ahead of her, leading her downstairs and out the entrance of her dorm. The entire time, Noeul is lost in her head. She begins down the rabbit hole of regret. Guilt. Sadness. Anger. And more exhaustion. The time she wasted being so stupid, rejecting Luhan’s calls. And for why?

All because she’d been so absorbed with her own problems. She’d been so goddamn selfish to see anything else, and now she was reaping from it.

When he notices that she too far falls behind, Baekhyun slows his walking until she falls into steps next to him. He pulls her hand into his, guiding her outside.

If she hadn’t been so unnerved, Noeul would have noticed that this was the first time in weeks that her hand stopped trembling if just temporarily.

“How did you find me?” Noeul breaks the silence in the car. They sit far from each other like the spur of vulnerability just earlier didn’t exist.

Baekhyun’s head is leaned against the window of his seat. She can’t make out his features in the dark, but Noeul can imagine what expression he has on right now. Vacancy.

She wasn’t the only one who pretended to be strong after all.

“Dad,” Baekhyun murmurs. Noeul isn’t surprised to hear of this new development, whether they had shared the same blood or not—it didn’t matter. “He was worried about you.”

Silence fills the car. The sound of the driver coughing is jarring.

Baekhyun turns his head, anchoring his gaze at her. “Me too.”

“What do we do now?” She asks. This honesty made her head spin. Frankly, too many things were happening tonight. So, Noeul was unsure of whether it was beneficial to stand behind the lines she’d drawn. She didn’t need to think twice to know which side she was leaning toward.

He exhales long and hard. “We fly there. We take it one day at a time. Or maybe an hour. Or minute by minute.”

“This next minute,” Noeul murmurs. “Let me hold your hand?”

Baekhyun stares at her for a while. There’s something unreadable in his eyes like he’s come to a realization of his own. What? She couldn’t say, but it didn’t matter. It looked like he made up his mind.

He scoots over to the middle seat. “You can have my entire arm, doll.”

Noeul adjusts herself until she’s tucked and sidled against him. She finds herself marveling that all this time, many things did indeed change, but this didn’t change.

Fitting perfectly in his arms. His head falling on top of hers like it belonged there all along. And the comforting squeeze of his arm that meant more than words could ever.

This was a truce. This was choosing to put aside their cognitive dissonances. Because more than the ty words that they yelled at each other—there was someone that needed them more. Someone more important, and Noeul didn’t want to regret another day.

She let herself have this. A tiny part of him. And the ed up thing was that it took Luhan’s withering life.