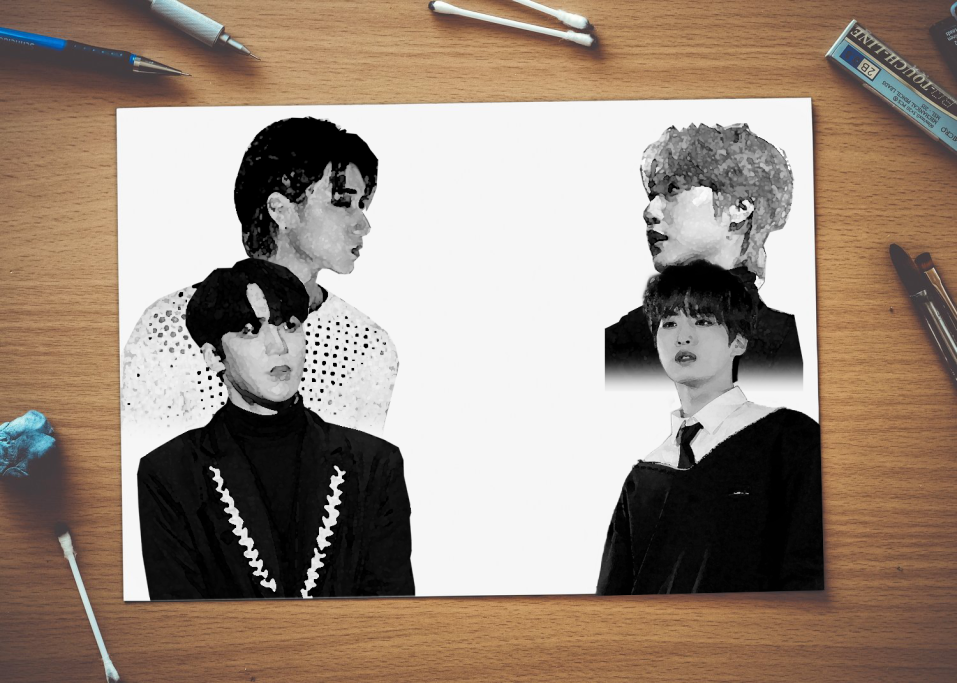 Things were going smoothly for Yunho and Dongju, the both of them coming to terms over their own grief for their family members. Hwanwoong was being the supportive friend and mate the entire time, making sure that they were both doing okay.

When Wontak came to visit to see how Yunho and Dongju were doing he could see that things were getting better between them, and declared a mission success.

"I told you it'd work out," said Wontak as he sat with Yunho and Dongju outside in their usual spots. "I am glad it worked out to be honest," said Yunho as he scratched the back of his head. "If it didn't well," he said, shaking his head. "Yeah, that wouldn't've ended well," said Wontak.

"I'm sure you're wanting to head home soon," said Wontak. "Not yet," said Yunho. "I need to go hunting for a souvenir," he said. "A shot glass and a plushie?" Asked Dongju as he raised an eyebrow. "Well..." Yunho said as he chuckled lightly, rubbing the back of his neck. Wontak laughs, shaking his head.

"How are the others doing?" Asked Yunho. "Fine," said Wontak. "Hyeongjun is almost well enough to do missions and Jun is pretty much ready to take your spot," he said. "I heard," said Yunho. "Chan's been talking about it in the chats to let me know what's going on with his brother," he said. "Since we'll be seeing more of him apparently," he added. "Ah," said Dongju.

"Did Dongmyeong ever talk about him?" Asked Wontak. "Jun? No," said Dongju. "He never talked about his life as a werewolf hunter," he said. "I have an idea of who Jun is though," he said. "I found a notebook he had, which is why I was able to take on his identity so quickly, I studied that notebook for so long," he said. "I see," said Wontak.

A deep sigh left Yunho as he looked at the wolf plushie sitting on his bed. He knew letting go of this one would mean he truly moved on but it was something he didn't want. He considered it, deciding on finding a new plushie to keep with him at all times. He decided to leave the plushie buying to Dongju, and would get a shot glass when he went shopping next.

"You should," said Hwanwoong. "Leave something here anyway," he added. "You may not realize it but you've really helped Dongju a lot these passed few months," he said. "Leave a memento," he said. "Dongju's going to find the perfect plushie for you," he said. "Of course," Yunho said, shaking his head in amusement before turning to Hwanwoong. Hwanwoong looked amused as he made eye contact with Yunho.

Dongju let out a deep breath as he flipped through his brother's journal again. He looked at the most recent posts made by him and noticed something new. When he had become himself again he started addressing his brother in the more recent entries, as if writing a letter to him.

Dongju sat down and started writing the next entry, addressing it to Dongmyeong before writing about what had been happening since the last entry.

"What are you writing?" Asked Hwanwoong as he leaned over Dongju's shoulder. "Just telling Dongmyeong of what's been happening," said Dongju as he looked up from the notebook.

"It's been a while since the last letter huh?" Asked Hwanwoong. Dongju nodded. "I'll leave you to it then," said Hwanwoong. "Don't forget to go shopping for Yunho's plushie," he said.

"When is he leaving again?" Asked Dongju. "Within another month or so I think, Yedam needs to come over to confirm his retirement," said Hwanwoong. "Ah," said Dongju.

Yunho picked up the shot glass that Yeosang had gotten him, packing it safely in his suitcase before grabbing the most recent one that he had gotten, looking at it before packing it beside the other one.

"I almost don't want to leave," Yunho said, turning to fold and pack his clothes. "You don't have to you know," said Dongju as he walked into the room. "I know but I can't leave them behind," said Yunho. "I owe them that much," he said.

"And plus," said Yunho as he paused in packing his clothes. "I still have a few things to do before I can leave Kris's pack," he said. "If I ever do anyway," he added. "If you do leave, you're welcome here," said Dongju. "Well, if Xiao allows it anyway," he added. Yunho nodded, going back to folding and packing up his clothes.

Yedam appeared a few days later with Wontak to discuss Yunho's retirement from the werewolf hunting association. "You're lucky you're technically protected by 'shifter law," said Yedam. "Otherwise we'd have to retire you the usual way," he added. Yunho scratched the back of his head. "I would've been fine with that but," he said, shrugging.

"I'm gonna miss having you around for missions," said Wontak as he patted Yunho on the shoulder. "Have fun in retirement, and tell San I said hello," he said. Yunho blinked, before nodding, grinning in response. "I'll be sure to tell him," he said.

"You really need to go huh?" Asked Dongju as Yunho made sure he had everything before going through security at the airport, including the new journal that Dongju had gotten him. "Yeah," said Yunho as he turned to Dongju. "You can come visit at any time! Just meet us at Starbucks," he said. "You owe me a drink there by the way!" Said Dongju as he pouted. "Oi," said Yunho. "Only if you get me one," he said. "Fine," said Dongju as he sighed.

"We can tell stories about our brothers over Skype whenever," said Yunho. "I'm sure they'd be embarrassed," Dongju said with a snicker. "Of course," Yunho said, chuckling.

"I better go then, Hwanwoong has a present for you from me," said Yunho as he turned towards the security section. "Really?" Asked Dongju. "I'm sorry I couldn't get you your present before you left, but it should be there when you get home," he said. "I'm sure," said Yunho. "But thanks for getting the plushie for me," he said. Dongju nodded, watching as Yunho headed into the security check in before turning and leaving the airport.

Dongju entered his room after returning from the airport, spotting a box on the bed that Yunho had been sleeping in for the passed few months. "What'd he leave me?" He wondered, going to open the box, blinking in surprise as he picked up the precious wolf plushie that Yunho cherished. A note was also in the box along with Yunho's favorite hoodie folded neatly at the bottom. Dongju picked up the note after putting the plushie on the bed, reading the note.

Take care of San! He had convinced me to let him stay to watch over you. I know it's weird to leave my hoodie too but I feel like I won't move on if I don't. This may be my last goodbye to you but I hope you understand that I am leaving San in your care because I wanted to, not because I was forced to. Thank you again, for helping me move on.

"You're welcome," said Dongju as he put the note down, smiling softly. He went to put the plushie on the desk before going to the box and taking out the hoodie, unfolding it and putting it on. It enveloped him of course, but he didn't mind that. He let out a content sigh as he put the lid on the box, picking it up and bringing it over to the desk. He sat down, grabbing his brother's old journal and flipping over to the very last page. He smiled slightly as he first addressed Dongmyeong before starting to write about the day's events.

Yunho really hated economy class as he finally got off the plane. He swore that next time he'd take business class. He entered the terminal to see three familiar faces waving at him. "Hey guys," he said, waving back to Jongho, Hongjoong and Wooyoung. "Welcome back!" Said Jongho as he grinned.

"You got a present waiting for you at home," said Hongjoong. "Of course I do," Yunho said with an exasperated sigh, earning a chuckle from Hongjoong. "We just got back too, we were waiting on you," said Wooyoung.

"How was Europe?" Asked Yunho as they walked over to baggage claim. "It was fine, I hate travelling," groaned Wooyoung, earning an amused snort from Hongjoong. "Luckily we don't have to travel for a while eh?" Asked Jongho. "Let's hope," said Wooyoung.

Yunho entered his room after spending the day at Starbucks and catching up with the others, spotting a box on his bed. He shook his head and went to unpack his suitcase, stacking the latest shot glasses on the stack of shot glasses. He then put all his clothes away, putting the new journal on his desk afterwards.

He then walked over and examined the box, noticing it was from ia and smiled at it. "So it did arrive then," he hummed, picking up the box and bringing it over to his desk and setting it down before sitting down on his chair. He brought the box into his lap and opened it, blinking in surprise at the first thing.

He brought out the new plushie in the form of a white fox, remembering that the fox at the pond had been that color. He put it on his desk before picking up the next thing, which was the drawing of San in a picture frame, with three new additions to the picture. It was who he assumed was Dongmyeong who was facing San, and himself and Dongju under them facing each other. He found a note at the bottom of the box as he put the picture frame on his desk, picking up the note and reading it.

I hope you like the presents! The fox plushie was really hard to find I swear! Also I wanted to leave this drawing with you, as I had finished it just before you announced your retirement. I hope you like them both, and tell San I said hello!

A chuckle escaped Yunho as he put the note on his desk before closing the box and putting it on the floor to be used again later. "I'm sure it was, I'm sure it was," he said, grabbing a pen from the cup full of pencils on his desk and flipping open the journal to the first page. He addressed San before he started writing about the events that happened since he had been living with Dongju and his pack.

Author's note: I commissioned a friend for an image of what Xion drew, and here it is :D Credits go to ErrorMacro713 for the image!

Like this story? Give it an Upvote!
Thank you!
← Previous Chapter Next Chapter →
Author's Thoughts
Chapter 16 edit: For those who were wondering what kind of image Xion drew, I commissioned a friend to make the drawing come to life :D credits in the author's note at the end!
Read More →
Back to Top ↑
No comments yet
Back to Top ↑
Table of Contents
Foreword
>> Collapse chapters <<
Back to Top ↑
Community Promoted