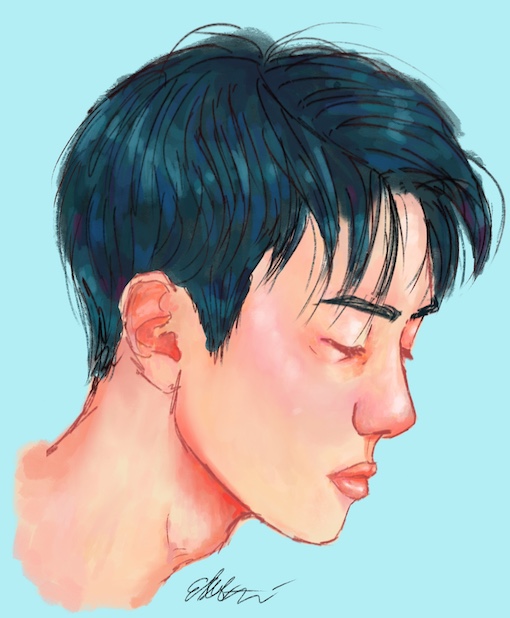 I have a tendency to count times.

The third… and so forth.

I had done the same with Nam Juri. I had counted the times she caught my eye… until I was counting the times I had played games with her.

I know my habit is strange, because most people don't count the number of memories they have with another person.

Normally, memory isn't quantifiable. It's a nebulous concept—something vague, a library of encoded images and shapes that form a hazy miscellany. There are good memories; there are bad ones. Some memories are incomplete, others are vivid. A few selections are downright fabricated. The point is that the human memory is often seen as an endless collection; a cloud. Unnumbered. Infinite. Uncountable. Endless.

To me, however… memory has always been a list.

A finite set of events.

A part of the reason why I had enumerated the times I shared with Nam Juri was because there were only so few of them to recall. I have always known that she and I were likely to have amounted to both everything and nothing, and hence these times were counted because they were…

I hated that I knew we had an expiration date.

And I hated more that I was the reason for it, because the moment I had agreed to a deal with Sanghoon, she and I were never really, truly, wholeheartedly going to be an everything.

And so I counted our times.

I didn't want each time to be lost in a cloud.

They were precious to me.

I wanted to remember each and every one.

I counted because I didn't think I deserved any of them.

And now that she has taken her leave from Seoul, there will be no more times to count.

There will never be another first time.

There will only be a last time.

I know she would have stayed if I had asked.

I know if she had stayed, I would have had far many more times to count. Perhaps we would have made so many new memories that I wouldn't have even been able to count them all. Our times would have been countless.

If she had stayed, it would have been heaven on earth.

But if she had stayed, she would have just been indulging in a little world that didn't have space for her growth. She would have been miserable.

It would have been my heaven.

It would have been her hell.

And though I have been well-practised all my life to take, this was the one time I had wanted to do good by my girl.

I didn't ask her to stay.

And that was our last time.

It's his first day of school.

He must be nervous, because his teeth won't stop chattering and he's uncontrollably fidgeting in the backseat of my car. I hardly think the boy is self-aware of his own actions because of the way he rambles sentence after sentence, but fortunately for him I'd choose the sound of his rampant conversation over the radio any day of the week.

My eyes may be focused on the road ahead of me, but every now and then I'll spare a glance at my carbon copy through the rear view mirror. Our visual resemblance is uncanny. We might only share a mother but he somehow bears many of my features—a big, tall nose, long brows that rest close to his dark eyes and a serious, brooding face.

Many like to remark that he looks like a mini me, but looks aside you'd never guess we were brothers.

Honestly, I'm grateful my mother hadn't given birth to a kid with my disposition. Seojun is a refreshing addition to my life, and candidly speaking he is the reason for many of the successes I've accumulated.

I'm not much to anyone, but to him, I'm everything.

We only have each other.

Sanghoon is behind bars.

My father resigned and had gone incognito three years ago when I had waited long enough to uncover the real reason he had shut down the psychiatric clinic to work in the hospital—his repeated propensity for hiring unqualified physicians from abroad, several scandals of breaches in patient confidentiality, systemic abuse and patient neglect. A ty father and an even tier doctor.

And my mother… she had supported my father because she feared that lacking his financial backbone would have made it impossible to raise Seojun. And she hadn't batted an eyelash when I had taken my brother to leave.

Seojun and I only have each other.

Besides, we have Baekhyun. Funnily enough, we also have Junmyeon.

The former has not been seen for a week now, citing that his absence is because of some TV cooking show boot camp, while the latter is a friend I see on a weekly basis. Despite our past he had been instrumental in assisting me with the entirety of the ordeal with my mother and father. He had helped me legally emancipate Seojun from my mother's parentship so that I could officially become his legal guardian. For that, I consider him a friend for life. His return proved nice, too. It was good to finally have a friend that knows how to cook.

Cutting off the ties I had with my family was the beginning of a life of hardship. For years I lacked financial help and hence resorted to taking up odd jobs to make money, on top of the sums that Junmyeon had insisted I take.

But Seojun and I were still everything and more.

Until eventually, things had begun to take a turn after Jongdae, an old friend from high school, had resurfaced after living overseas. He had offered me a job.

It wasn't the highest paying job out there, but after the myriad of physical, laborious work I had taken up to make ends meet, it was a refreshing change that required creativity.

I didn't think I would, but I enjoy painting.

When you see a colour, there is no first and no last.

Making something into everything from nothing is liberating.

It was damn surprising that art had come easily to me, but I've been painting custom murals for Jongdae's clients ever since. We have future plans to independently open up an official business.

Maybe the years of spray painting male ia on my father's buildings as a rebellious teen had come into clutch after all.

I must admit, the favourite part of the job and my murals must be the dash of red.

I always try to leave a little bit of her in every job I complete.

Sometimes almost every inch of an artwork is red.

Sometimes the colour is only featured as a small speckle.

But every time, it reminds me of her and I like that.

It was my new way of creating more times with her.

Seojun extends a breath of air, frowning when he nervously scours his surroundings for a flicker of evidence that the place is hell on earth. I smile, crouching before him as I straighten his uniform and backpack.

Ruffling his hair affectionately, I pull my lips into a smile. "You'll be great, Seojun." He's a good kid, I believe my own words without a fault.

"Do I really have to be here? Can we go home? Junmyeon told me that school's overrated."

Shaking my head, I sigh. "Junmyeon's an idiot."

"Nuh-uh. He was telling me all sorts of crazy stuff! He said you used to beat up everyone that got in your way. What if I get beat up?"

Junmyeon, that bastard. "Junmyeon's lying. I never beat up anyone. I was a quiet and respectful kid that treated everybody with unmatched kindness."

"He also told me that you used to skip school every day."

I'll punch him in the mouth the next time I see him. Given that he's a primary school teacher, maybe he'll receive a few looks of horror from his students.

"Don't get any ideas, Seojun. Junmyeon's weird, you know that."

My brother giggles. "You're right! He is a weirdo. He sings The Welcome Song every time we come over to his house."

I'm chuckling softly as I straighten my knees to stand straight. Typical teacher , always making up weird songs for kids. I shouldn't have been surprised that he'd eventually pursue education. He had dabbled in cooking for a while with Baekhyun, but the latter was the only one that had a true passion for food. The former later discovered his love for being a school teacher.

Like this story? Give it an Upvote!
Thank you!
← Previous Chapter
Author's Thoughts
[Misconduct] I've just started a new sehun x oc fic!!! the first chapter is finally up so if you're looking for another enemies to lovers au, pls check it out omg??!?!?!? https://www.asianfanfics.com/story/view/1484464/intuition
Read More →
Back to Top ↑
No comments yet
Back to Top ↑
Foreword
>> Collapse chapters <<
Promoted - Advertise