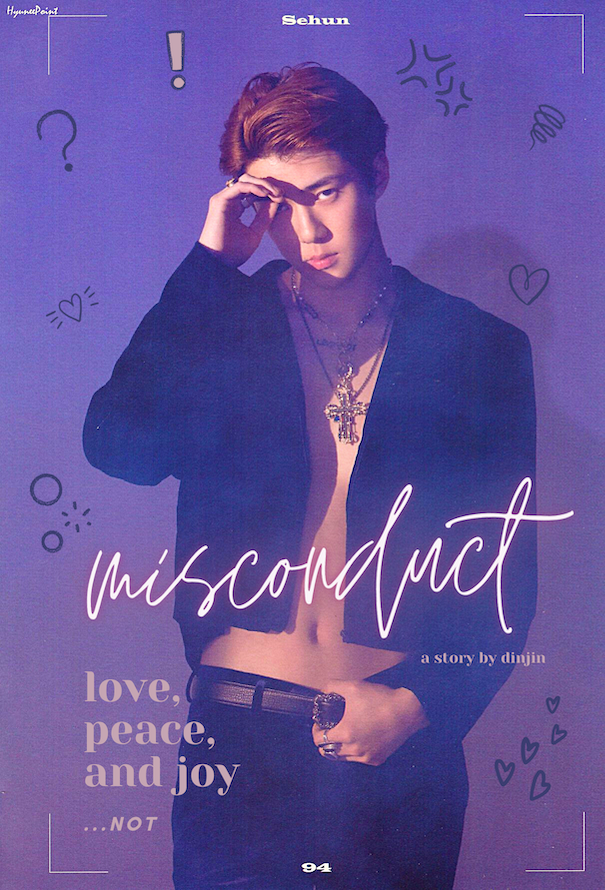 Many of the earliest memories I can recall from my childhood are set in the office of one of my father's colleagues. Like my father, Dr Xue was a psychiatrist hell-bent on categorising me into a box with definitive parameters. Unlike my father, Dr Xue specialised in paediatric care and had recently immigrated to Korea after extensively practising medicine in China.

Dr Xue had been employed by my father as a paediatric psychiatrist in his clinic. Though he would claim for several years that it was a financial decision to widen the scope of his clinic's practice, he and I both knew the real reason she was here: to monitor me.

Contrary to what the public believes, my parents are not together. They may be married, but they are no longer a couple. And while I have always known that my mother would like nothing more than to emancipate herself from her marriage with my father, he had always been insistent on retaining their marriage status. Why? Because he is obsessed with his image.

For the first four years of my life, I had been single-handedly raised by my mother. However, once my father had discovered the value in marketing himself as a well-balanced, loving father and husband with a picture-perfect family, he had brought us with him as his career propelled into a life of extensive media coverage and public adulation.

We were no longer just a family. We were the Oh family—but for the most part, we were Dr Oh's family.

And as a child, I struggled to adjust to these changes.

My father has never been one to be light with his words nor his hands, and I'd often find myself on the receptive end of his rough words and rougher fists. He was the same with my mother—he detested it when we misspoke; when we weren't the most impressive people in the room; and when we embarrassed him in front of his esteemed colleagues.

And these experiences became the root of my suffering as a child.

The same way Nam Juri had, I eventually became a child of fewer words; of colder stares; and of smaller smiles. One way for my father to monitor my behaviour was through the lengthy mandated counselling sessions he forced me to endure with Dr Xue. During such consultations, she extensively wasted her time trying to interrogate me about my family life with my father, to see if I'd crack. To see if I'd showed signs of double-crossing my father in any way.

She was there to monitor me.

And it is due to these very reasons that the walls of my father's psychiatric clinic began to seem so bleak. They represented a charmless cage. A place that my father sought to imprison his own son.

And, I like to think that for such reasons, it became all the more special for me as a child to witness the way Yeon Soomi had brightened up every room she entered when she had spoken too loudly, hugged too tightly, and smiled too widely. It was odd—I detested her for being able to find light in the place I hated the most in the world; but at the same time, it was electrifying. She had such a charm. She gave me hope that, one day, living with my father could be bearable; that one day I would be able to look at my father the way she looked at hers; and that one day, if I deserved it, I could just be... happy.

And so you can imagine how disappointing it had been for me to see my Yeon Soomi become Nam Juri, a girl I didn't recognise—she had effectively shattered the image I had always constructed in my mind of her.

The thing about being a product of my father is that it is effortless for me to be the same heartless and cruel person my father is.

Playing games with her had become so easy.

The first time I played games, it was the one that would later let all the others unfold. It was the day after I had been transferred to the facility, when I found myself in Sanghoon's office after I had fought with Suho. I believe she had been bed-ridden for a week at that time, and had no friends who knew what had happened.

"Sehun, it's nice to see you," Sanghoon had smiled that day, already suggesting to me that he had something up his sleeve, "have a seat."

He offered me a deal. A simple one, at that.

He knew about my parents—he knew about their failed marriage; the facade they've spent so long to nurture and maintain; and the fact that I couldn't have given less of a about his affair with my mother. But he knew what I did care about was the retaliation I would receive from my father if Sanghoon had released to the public all the information he had gained from his affair. And while I have grown to become a person that would not normally give a about my father, or upkeeping his reputation, Sanghoon knew better than to blackmail me like that. He offered me something in return—he offered to let my mother go; and more so, to let me go. He knew that the walls of this detention facility suffocated me in the same way my father's psychiatric clinic had—they were the same. They were both ways for my father to monitor me. He knew I hated that the most.

Sanghoon knew this was a place I was determined to escape.

He knew that if he offered to emancipate my mother and me from my father, I would agree to the deal.

And I did, in part because at that time I didn't have a reason to care for Nam Juri, especially now that she wasn't the person I thought she was.

Looking back at it now, it's laughable.

Because I didn't anticipate how much she would end up meaning to me.

The second time, I had the opportunity to delete the audio.

She had been inside Baekhyun's bedroom making a call to her friend Minji, and the boy had turned to me with a dark glare.

"Why did you agree to that?"

I remember thinking he, too, was naive to think I have ever been a good person with good intentions. "Why not?"

"Maybe you'll never want to admit it, Sehun... but he was the one that set your family up for failure, and he has to be the one to watch it fall."

Because I felt there was no way I could give a about a man that made my childhood miserable.

But he was right.

That little boy confined in the walls of my father's psychiatric clinic had always been desperate for his approval.

And he is the one that decided it would be best to keep the audio.

The third time I played a game, it has ed me over, time and time again.

It had been that night that Baekhyun had asked me to attend the union mixer with him. He had reported that he saw Suho accessing the administrative files that night, and while we thought it had been an action against us, it turned out that it was Nam Juri's files that he stolen—the same files that Mina would later go on to expose.

And while I had no reason to want to protect Nam Juri, a girl I was already angry with for my own reasons, it felt like

Please Subscribe to read the full chapter
Like this story? Give it an Upvote!
Thank you!
← Previous Chapter Next Chapter →
Author's Thoughts
[Misconduct] I've just started a new sehun x oc fic!!! the first chapter is finally up so if you're looking for another enemies to lovers au, pls check it out omg??!?!?!? https://www.asianfanfics.com/story/view/1484464/intuition
Read More →
Back to Top ↑
No comments yet
Back to Top ↑
Foreword
>> Collapse chapters <<
Promoted - Advertise