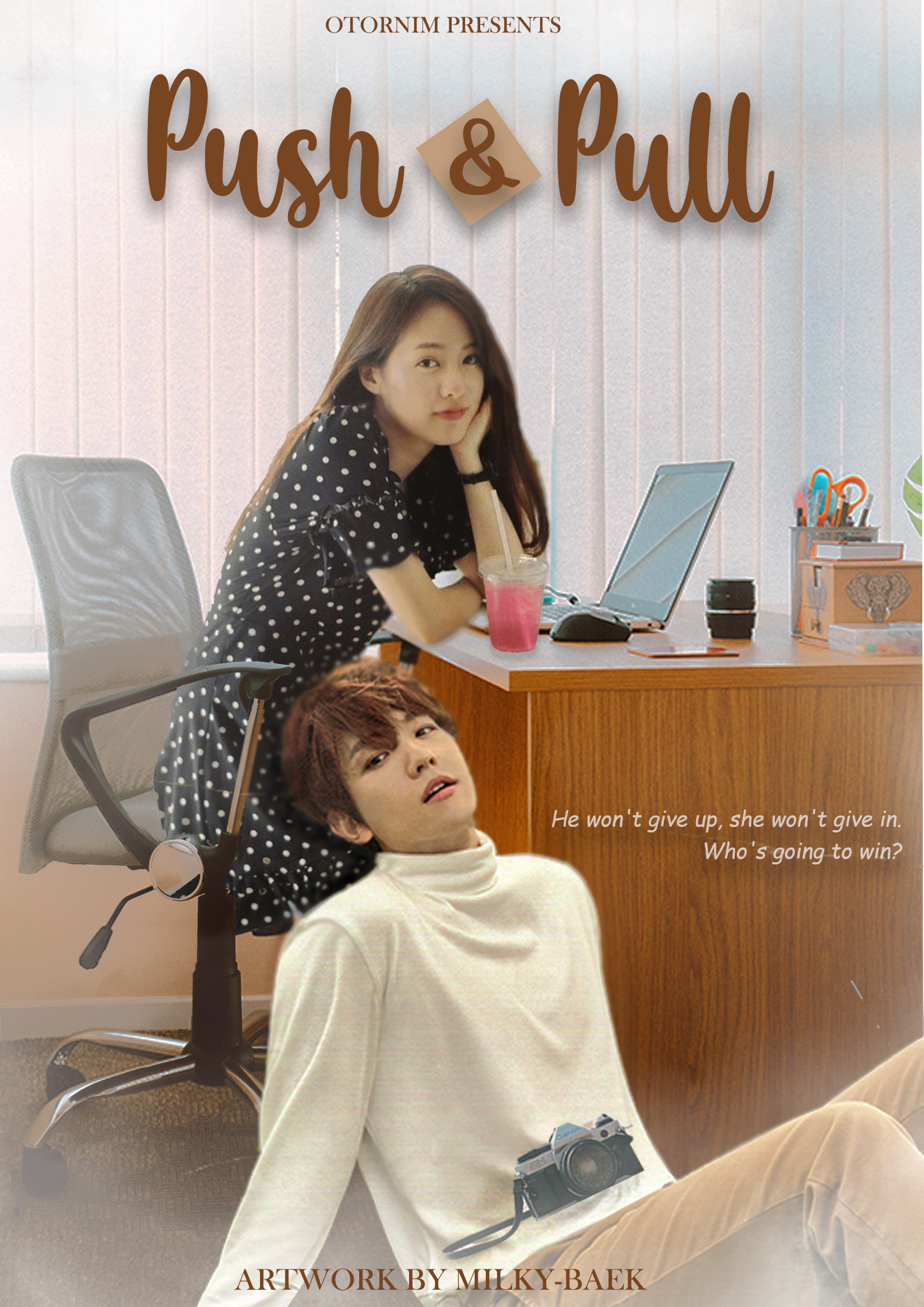 Baekhyun paced around his bathroom, back and forth, in and out. Was he here the whole night? Was he trying to go to the bathroom but passed out? That would have been a mess. Or was he dropped off by Chanyeol himself right in here, his head leaning right on his toilet seat? As he remembered the scenes of him being dropped off to his home, wild and wasted, he also recalled most of the scenes he had unneccessarily shared with Kim Jiwon.

“So, you went through a lot too, huh? I’m sorry that happened, Baekhyun. I won’t support women like that, trust me. I won’t be biased when it comes to that.”

“Yah Kim Jiwon, alw—always remember that whatever that dude did to you, you didn’t deserve any of it, okay? You’re only like … the coolest woman I’ve ever met. You’re so independent and I ing love it.”

“I actually like your eyes more than your S-line … also your little dimple on your left bottom lip, I think it’s adorable. Can I kiss it in a friendly way?”

His eyes protruded as he leaned on the wall for support. More conversations penetrated his still throbbing head which he was now holding with both hands, putting as much pressure on them as possible to ease the pain. Frustration, humiliation. Total wreck, he was. Did he just share his deepest darkest secrets to his target woman? Did he just show the most vulnerable side of him to Kim freaking Jiwon?

Worse … Chanyeol was there too the whole time?

“Oh my god, oh my god, Oh my g—” He ran out of the bathroom, rustling his way into his bedroom. His phone, he needed his phone. He leaped across his king-sized bed, onto the other side, where he spotted the cardigan that he was wearing last night. Dig. Flip. Pockets, inside out. No phone. He patted his hands on his pants, against all the pockets. “Gotcha.” He grabbed the phone from his left pocket and was about to unlock it to make a call when he realized it was not his phone.

Whose phone did he take—

“Oh, .” He pressed the button on the side and saw the lock screen, it’s a picture of Jiwon with a middle-aged woman. “This must be her Aunt Hayoung—oh for ’s sake, I even know that now. !” He slapped his own mouth for letting that information slip out easily, unknowingly. He fell on the bed, his eyes glued down to the locked phone. There were fifteen missed calls from Caller I.D. Byun boy. His mouth, half-opened with an amused yet offended smile. “Hm, so I guess we switched phones.” He stood up to walk to his closet. It was already ten and he was scheduled to meet up with Hara and Kyungsoo to one of their pre-nuptial photoshoot locations, he needed to get ready … like an hour ago.

He put the phone down first before grabbing some new clothes from the closet. As much as he wanted to go over every single memory he had of last night, he needed to get ready or he would get some lecturing from the couple. Worse, Kim Jiwon was included in this schedule too. They were going to see each other today and he wasn’t excited about that. He felt terrified just thinking about it.  He knew he needed to pretend to not remember a single thing if he wanted to keep his reputation, he couldn’t afford to let her think she was above him now that she found out about everything he went through.

She nibbled with her finger tips while waiting, her eyes constantly peeked on the phone in her hand – Baekhyun’s phone. The soon-to-be married couple, Kyungsoo and Hara, stood by her in the middle of this beautiful garden. Their ceremony and some of their photoshoot were to be held in this big art museum that had beautiful picnic spots, landscapes with fish ponds, some local sculptures and walking trails. Questioning looks surfaced behind the couple’s awkward smiles and random topics they have attempted to share with her for the past thirty minutes.

Did they hear what happened? Did Chanyeol tell them anything? Should she continue to pretend like she didn’t remember anything? She woke up with a bad hangover this morning but she fought through it; took some pain-reliever, and rushed to get to her schedule on time.

She had tried calling her phone so many times. She couldn’t remember when they exchanged phones but she knew they did and unfortunately, it was her idea but that didn’t matter at this point. She wanted to forget that she suggested, “Let’s take selfies on each other’s phones and send them to each other for fun.” That totally didn’t make sense at all. She was lucky enough that Kyungsoo actually knew Baekhyun’s passcode so she was able to try and call him—well, technically her phone. She had been praying countless times, wishing and begging that the heavens erased Baekhyun’s memories of last night. Fingers crossed that he was one of those people who never remember much when they’re drunk.

“Should we just start walking around first? I mean, we’re here so that we can show you and Baekhyun the main location for the shoots.” Hara snapped her fingers, not being able to handle the awkwardness anymore. Kyungsoo nodded eagerly, widening his eyes at Jiwon. “Baekhyun should be here soon, he’s usually not good with handling hangov—I know he drank last night because … uhm … he actually texted me last night, he said he was out with Chanyeol last night? You know Chanyeol? Last night … they hung out. I’m sure … that was last night?” He grinned; nervousness evident in his words. Hara chuckled and eyed her fiancé. “Yeah, I think she gets it that it was last night, sweetie.” She threw her arms around the man’s shoulder to pull him closer.

Jiwon smiled in defeat. “It’s okay guys. Chanyeol must have told you which is just the right thing to do. Uhm … Baekhyun and I got a bit too wasted last night and we must have been a handful to him. I apologize.” She couldn’t take it anymore. She wasn’t going to try and hide the fact that it happened, not from them at least. It was unprofessional of her, no matter what. They were still her boss after all, including Chanyeol. “Yeah, Chanyeol told me he was so worried last night. You guys were mad drunk, you two passed out right away after a few drinks, I heard. I’m just glad you guys didn’t fight more or something, he said you didn’t even look at each other the whole time, as if you weren’t on the same table.” Hara sighed in relief, relief of finally being able to openly discuss it. Jiwon opened to speak but none came out. So, Chanyeol must have kept to himself the deep stuff that actually happened along with the mad drunkenness. He was respectful about it, big phew. After all, she and Baekhyun revealed some very personal things last night.

She appreciated that ... quite a lot.

A familiar scent glided across her nose making her turn. “Ugh, Byun Baekhyun. You’re so late.” Hara hissed immediately. They shared eye-contact right away without saying anything. Both of them wore the biggest sunglasses anyone could ever own with their poorly put-together outfit of the day and a large-sized coffee on one hand – funny how their minds operated quite alike today or was it normal for hungover people? Baekhyun handed in her phone to her. She did the same thing and gave him his phone. Awkward silence.

Jiwon watched him set up the camera he brought with him. He dropped his duffle bag carelessly and his coffee carefully down the grass and began taking pictures. “So, we have a couple of ideas we have suggested to Wedding21—like for the theme of every photoshoots. We were thinking vintage?” Hara dragged Kyungsoo to follow the guy, Jiwon didn’t have any other choice but to do the same except she grabbed Baekhyun’s duffle bag along with her. She didn’t trust the place enough, there’s still some people taking walks and jogs.

She cleared again as she handed out the bag towards Baekhyun, waiting for him to grab it. “Uh, yah.” She finally managed to say a word. “Right.” He simply took the bag from her, threw it back to one shoulder and proceeded to taking pictures. Hara and Kyungsoo who stayed behind looked at each other, both waited for the two to share a conversation.

Kyungsoo nudged his fiancée, Hara nudged back. “Say something.” She mouthed in response before pushing him towards the two. “Hey, uh, Jiwon—so you—uh, what do you think about vintage? Baekhyun, what about you? Is that a good theme for this place? Yes? No?” He asked, repetitively turning behind him to seek more help from his fiancée.

Baekhyun finally stopped taking pictures, he turned but not enough to look back at his friend. Instead, his eyes landed beside him, to Jiwon. “What do you think?” He asked. She nodded but remained silent once again. Kyungsoo sighed in surrender, skipping backwards back to Hara’s side. “Okay, you guys—stop.” Hara grunted, finally losin