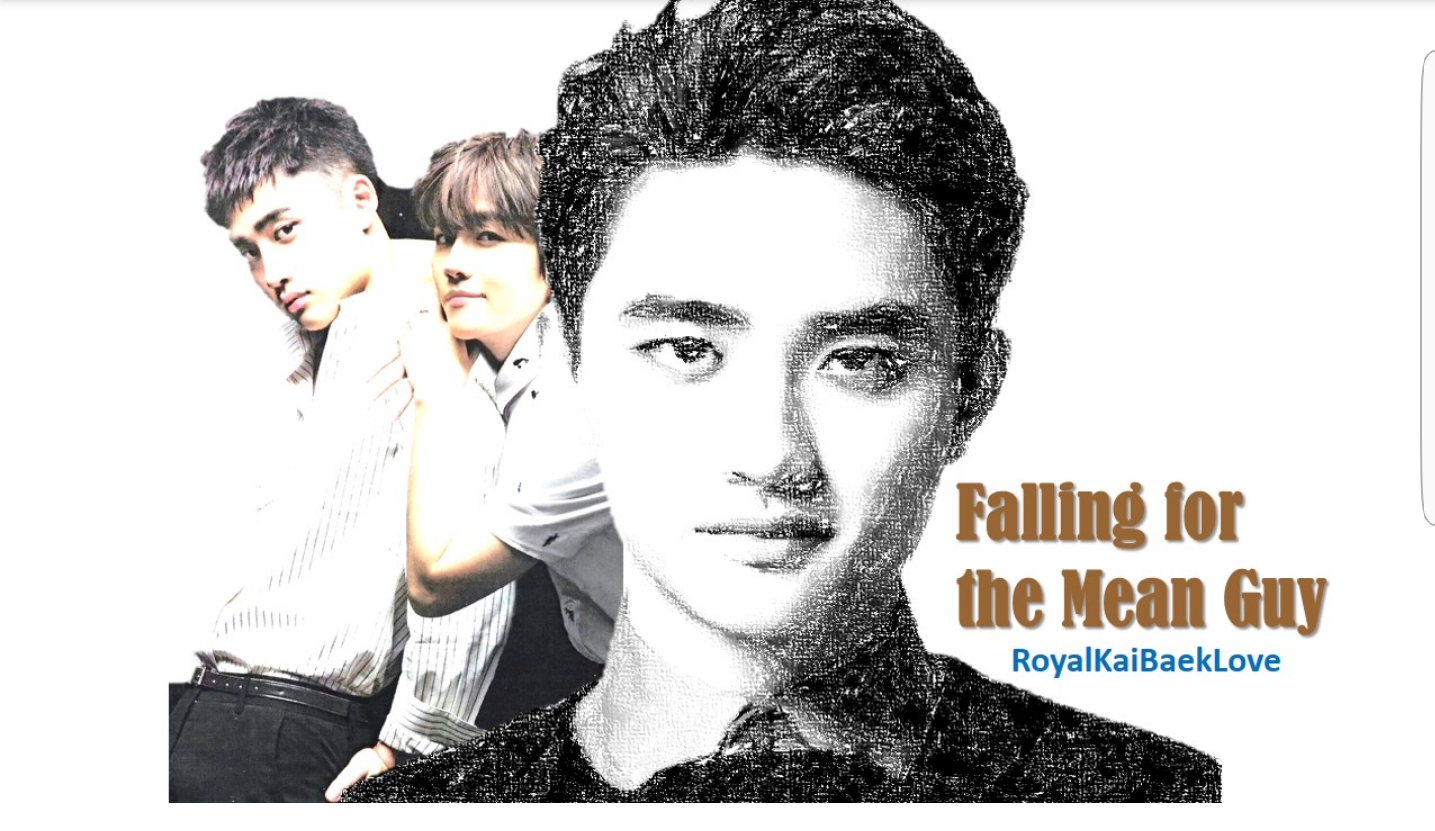 ,,Kyungsoo.....what a surprise." Luhan opened the door finding Kyungsoo before his door looking a little angry. He likes when Kyungsoo glares. It turns him on actually.

,,Stop it Luhan. Your game isn't funny anymore, not when Baekhyun is the reason. You had your fun but this needs to stop." Luhan chuckled leading against the door hands folded against his chest.

,,Are you scared? If he loves you so much, you shouldn't worry."

,,Baekhyun is an emotional person, you will hurt him and I won't stand aside letting you hurt the person I love." Kyungsoo was serious and that kinda surprised Luhan and not really. He never seen him like this before.

Kyungsoo never told him that he loves him, that makes him jealous actually.

,,Would you like some coffee? Or will your pup get jealous." Kyungsoo came closer to Luhan glaring at him like never before. His fingers wrapped around Luhan's neck slowly squeezing him.

,,Stay the away or next time I won't ask this nicely." Kyungsoo pushed Luhan against the door hitting his back hard before leaving.

,,This will be interesting in the end." Of course he won't stop because he wants to know Baekhyun better.

Luhan close the door going to make himself a coffee thinking about Baekhyun's lips. He wants to kiss his delicious lips. How mind always runs to Baekhyun, was the pup up already?

His head was hurting, and his , but his head was killing him. He barelly could opened his eyes. He was tirsty as well and hungry. Really hungry, Baekhyun wanted to stand up when everything around him started spinning around him. He had to sit back down fast.

What was wrong with him?

He looked for his phone calling Kyungsoo but he didn't pick up. He opened his mouth wanting to yell his name but the urge to throw up made him rush to the bathroom. Now he was worried.

Kyungsoo looked confused when he found Jongin getting out his car when he parked his own car.

,,What are you doing here?"

,,Baek called me! He's sick!" Kyungsoo checked his own phone seeing three missed calls from Baekhyun. He run like crazy, he doesn't even know how he managed to open the door and run up the stairs. His hands were badly shacking.

,,Baekhyun!" He yelled as soon he walked inside their bedroom, Jongin was behing him having the same scared expression over his face.

,,Baekhyun." Kyungsoo never knew that he can feel lile this, panic, adrenalin pumping inside him. He really hates that feeling. He never thought that he will ever feel like this. Worried.

Kyungsoo rushed to the bathroom after hearing a small whine coming from there. He found his missing pup down on the cold tiles holding his stomach crying in pain.

,,I'm here Baek! What is wrong?" Kyungsoo dropped next to Baekhyun pulling him to his lap. Kyungsoo looked up at Jongin who was looking worried as well.

,,M-my tummy...it hurts so badly " Baekhyun cried in pain looking up at Kyungsoo through heavy tears.

,,Let's go to the hospital. Jongin help me!" Jongin hold Baekhyun up both running to his car.

Baekhyun has no idea when he reached the hospital, he couldn't stand up or open his eyes.

He just noticed someone taking his blood.

,,You're going to be fine Baek." Baekhyun heard Kyungsoo's voice close to his ear and hand over his head slowly caressing his hair in a lovely way. That made him feel better.

Both Kyungsoo and Jongin were sitting in silence waiting to find out what's wrong with Baekhyun. It was a deep silence between them until Baekhyun woke up again throwing up on the floor.

Last night Baekhyun was fine, they had a nice night together, did he work him too much? Was this his fault? He will never forgive himself if he was the reason.

,,He's okay, just a bad case of food poisoning. He eat something bad and got a nasty bug now. I'm going to write him some strong antibiotics so he can get better." Kyungsoo and Jongin, both let out the breath they were holding. He really thought that Baekhyun was going to die in his arms.

Food poisoning was a serious thing as well. At last is nothing worst. He watched the nurse give him an IV that made Baekhyun pout in his sleep.

,,Make him drink a lot of water, he can leave after this IV, don't worry Kyungsoo, he will get better in two, three days."

,,Thank you hyung, I have no idea what he eat to be like this, he was okay last night."

,,It can happen Kyungsoo. I'll leave you alone now. Call me if he doesn't feel better." Kyungsoo and Jongin made a bow at the doctor.

,,No, stay with me Jongin." Jongin nodded sitting next to Kyungsoo.

,,Are you and Sehun serious?" Kyungsoo asked after some minutes of silence. That question made Jongin think.

Please Subscribe to read the full chapter
Like this story? Give it an Upvote!
Thank you!
← Previous Chapter Next Chapter →
Author's Thoughts
Thank u OdetteSwan for the poster 😙
Read More →
Back to Top ↑
No comments yet
Back to Top ↑
Foreword
>> Collapse chapters <<
Promoted - Advertise