AU where Yesung is an author and Siwon is an actor.

Kim Jongwoon suffers from mild anxiety. Yesung was his pen name. No one knew who he truly was except his editor, Kim Heechul. That was until he received a proposal to turn his novel into a movie and his editor decided that he should now be known in public. 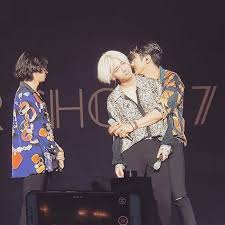 That was what he was feeling. Kim Jongwoon was feeling really nervous. Why? Because his editor, Kim Heechul, decided that he, Kim Jongwoon, should go public now. They were currently in a large crowd, currently attending a huge award ceremony.

“Hyung, I can’t do this,” Jongwoon heaved a deep breath. “Please, let me go home,” he took his hyung’s hand so the other was looking at him directly in the eyes. Heechul was not blind to see how scared the younger was. “Please, I really can’t do this,” he repeated, practically begging to the older with his eyes.

Heechul sighed. How many times had they gone through this? He couldn’t count and he didn’t want to. “You can,” he looked at the younger firmly. “And you will,” he said a little too seriously which made tears pool in the younger’s eyes.

“I can’t,” Yesung whispered pitifully before he received a tight hug from the older. It made the tears in his eyes disappear but the fear in his heart was still there.

“And the winner for this award ‘Scene Stealer’ by Yesung.”

Hi! This is my first time writing for YeWon/Wonye. I am new to this fandom (just last November 2019) but I have always liked Yesung. I've been seeing a lot of YeWon pics and I like the pairing so much but there's not much fiction with them :(. There's a lot of KyuSung though. I think I'm being converted :D

And I'm still confused with Yesung's real name so I'm using the old one :D