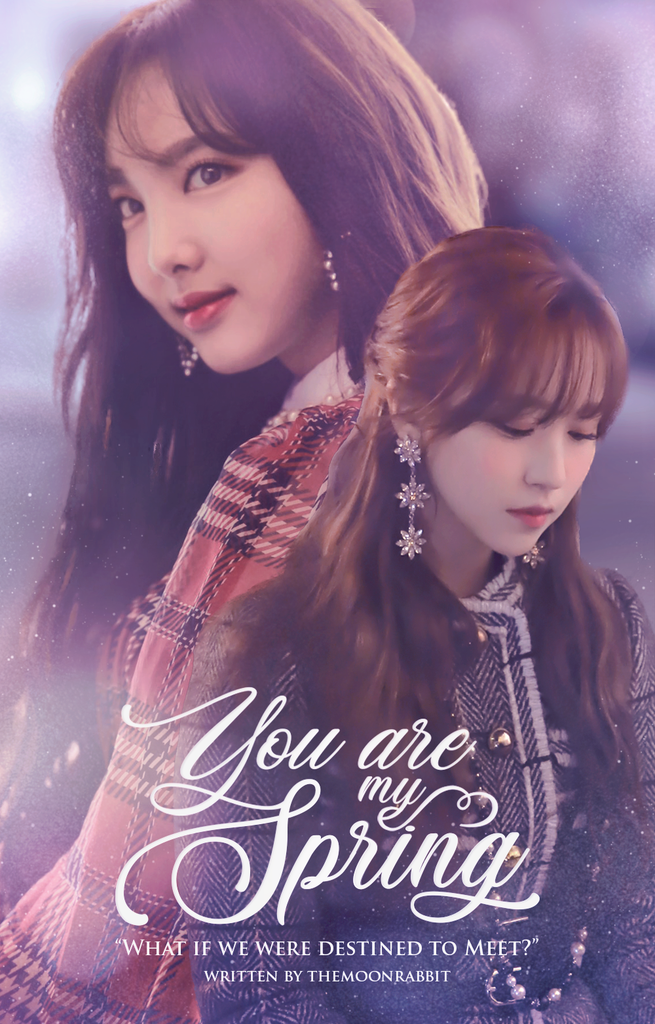 Myoui Mina is the heiress of a prestigious Japanese family. She not only grew up surrounded by luxury and wealth, but also by shallow people who never showed her any warmth. On a fateful Christmas night, she stumbles upon a girl whose smile seemed to shine brighter than all of the lights that surrounded them.

YOU ARE MY SPRING

"At the tip of winter
I met you, who became my spring
It’s such a miracle
After you came
My winters aren’t so cold anymore
Because I have you
Who looks at me."

An AU in which TWICE members are high school students. The main pairing is Minayeon with Satzu as a side pairing. Mostly fluff, with a bit of angst.

English is not my first language and I haven't been writing fiction for long. I try my best to avoid mistakes when writing, but if I do make any, please forgive me and feel free to let me know.

This story has been kindly reviewed by the amazing Rainy Day Cafe Review Shop. You can read it here.

The youngest child of a rich and prestigious Japanese family who owns a big restaurant branch. She is a timid, yet sweet girl who grew up with a distant family and not many friends. Her family was transferred to Korea so she is starting a new high school year there.

A friendly and outgoing girl whose family lives on the second floor of a bakery they own. Nayeon's family struggles financially so she and her brother Jungkook help out by working part-time at the bakery twice a week.

A cheerful and affectionate girl who moved from Japan to Korea upon starting high school. She had a hard time in the beginning because she was far from her family and her Korean wasn't perfect. Things started getting better when she befriended her classmate Park Jihyo, who is now her best friend.

Originally from Taiwan, she is a beautiful girl who has a mysterious aura. Appears to be cold and distant, but in reality, is a caring person who doesn't know how to convey her feelings properly. Tzuyu's family is very rich and powerful.

She is Nayeon's childhood friend and they are always bickering, but care for each very deeply. Jeongyeon is a cool and calm individual who is usually very sarcastic but becomes quite protective of her friends if something is wrong with them.

A hardworking and considerate girl who tries her very best in everything she does. She is Sana's best friend and is very close to her, usually being on the receiving end of the other girl's neverending affection. Jihyo is often the voice of reason in her group of friends.

Known for being an amazing dancer and passionate about food, Momo is a girl who moved from Japan in her childhood. She met Nayeon and Jeongyeon in her first year of middle school and quickly befriended them.

A funny and bright girl who is always smiling. Dahyun is Chaeyoung's best friend, and they have known each other since kindergarten because their parents are also close. They are practically always seen together and love to hang out at the arcade.

An artsy girl who is sociable and adventurous. Her best friend is Dahyun. Loves video games and can be rather competitive. Is usually very warm but can get easily annoyed when she is called short or small.

This fanfiction takes place in Seoul, South Korea. It features characters heavily based on TWICE members, however, please note that I am by no means trying to impose anything on them, this is simply fiction and is not supposed to represent the real person's feelings, thoughts or views. It's set on a high school, and the age difference between the characters has changed so that each trio can be in a different year in high school. I was inspired by a few different songs to write this: "Miracle", by GOT7, "Merry & Happy" and "The Best Thing I Ever Did", both by TWICE.

Next Chapter →
Author's Thoughts
Hey guys! I'm back with a new Minayeon one shot called "Speak Now". It's inspired by a Taylor Swift song, please check it out if you're interested <3

In front of the screen, Jaehyun is a shy and unremarkable student. Behind the screen, he is known as the popular hacker Mad Hatter who people hire when they want to acquire illegal information - for the right amount of money.