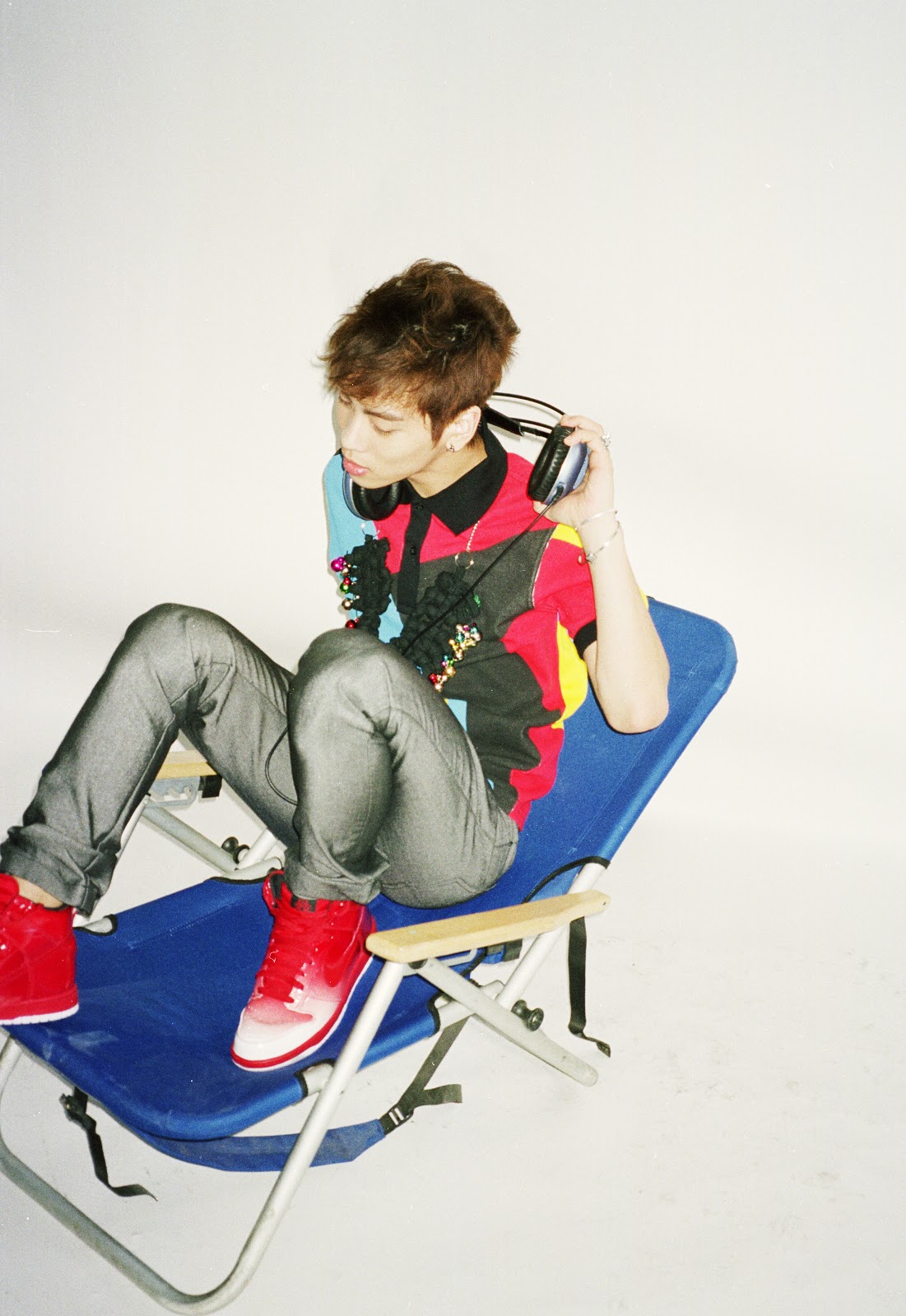 The one day of the week Jonghyun’s mother let him sleep him.

Other times she wanted him up and active or needed help with groceries or gardening.

But Saturday’s were his day.

Being that it was Saturday he expected to wake up in a good mood.

But his sister was across the hall obnoxiously playing loud music causing him to wake up early. It was 9 in the morning to be precise.

“I’m going to kill her.” He hissed under his blankets.

She did this on purpose. Every Saturday since they moved into their new place.

He rolled out of bed with his hair sticking out in different directions.

When he opened his door the music was even louder. He knew their mom wasn’t home or else she wouldn’t allow this.

He walked up to her door contemplating on wether he should kick the door down.

But instead he opted to do three consecutive knocks.

He did his knocks again.

The lack of response was getting to him. The music was loud but he knew she heard him knocking.

“JUNGHEE!” He said now banging on the door.

He heard the volume of the music increase.

“Junghee I’m asking you this nicely! PLEASE TURN THE MUSIC DOWN!” He yelled.

He wasn’t sure if his ears devices him, but he could have sworn he heard her say ‘no’.

If she wanted to be childish he would be too.

Thankfully, to his advantage she forgot to lock her door.

He swung the door open to find Junghee on her bed looking through a magazine as if she was unbothered.

“Get out.” She said barley loud enough over the music. Not even sparing him a glance.

He walked over to her stereo and unplugged it.

“Jonghyun! What the hell is wrong with you?! Get out of my room!” She said jumping out of her bed.

“I asked you to turn it down! Beside you know mom doesn’t like the music so damn loud anyway.” He said turning around to walk back to his room.

“Mom’s not here, stupid.” She said getting up to plug her music back in. She knew what he said was true but she didn’t care.

“Don’t-“ He started before he was cut off by the loud music.

He rushed back to the stereo to unplug it again.

“JONGHYUN GET OUT!” She screamed.

“If you touch my stuff again I’ll kick you in the head!” She threatened while walking back to her bed.

He rolled his eyes.

“Shouldn’t you be at Dad’s place anyways?” He said yawning.

She snapped her head around.

Since they moved in Junghee always left to stay with their father on the weekend. She would have left yesterday but their dad got off work late.

He walked out of the room but not without the door knicking the back of his feet as she slammed the door shut and locked it.

She then proceeded to play the music on maximum level.

He kicked the door before he went back into his room.

He had no other choice but to put in headphones to block out the noise.

He got on his phone for a little bit to check his social media and the group chat he and his friends had. He also checked his inbox from his boyfriend, but nothing was there.

He had hoped he would spend some time with him this weekend since he had been blowing him off every weekend for the past month. He wasn’t sure if he was doing it on purpose or if his life was really becoming so busy.

He had bible study this morning but he told him he would try to come over after that. He really hoped he would, he really missed him.

He eventually fell asleep with thoughts of Kibum on his mind.

He woke up a couple of hours later from his phone vibrating.

He answered it without looking at who it was.

“I need you to take Junghee to your fathers house.”

He sat up quickly in his bed, so quick it gave him a headache.

“Your fathers car is getting repaired and I won’t be home until later.” She said.

He kicked his legs under his blanket childishly.

“And try to stay over for a little bit. I’m sure he misses you.”

He hasn’t seen him since he moved out. And he wasn’t planning on it for a while.

“Thank you honey! Love you! I’ll see you later.”

He laid back down in bed hoping his sister wouldn’t ask to take her anytime soon.

But off course she had to ruin his peaceful    Saturday morning.

She swung his door open. Of course he forgot to lock his own door too.

He threw a mini temper tantrum in his sheets before he drug himself out of bed.

He decided to go in his tank top and pajama pants since he wasn’t going anywhere special.

His hair was still a mess and stuck up in ever direction possible.

He grabbed his house and car keys and took his time down the stairs.

His sister was standing outside beside the passenger door waiting for him to unlock the door.

She stood their impatiently.

When he unlocked it they both got in but Jonghyun took a moment to wipe the crust from his eyes and stretch to wake himself up more.

“Can you wait?” He snapped back as he put his keys in the ignition.

“You were taking forever.”

“Maybe if you’d gotten your license you could get your own car and leave whenever you wanted instead of relying on mom, dad, and me to drive your spoiled everywhere.” He said in fake sugary tone he always did to get on someone’s nerves.

“Just shut the up and drive.”

“Of course your highness, anything to get you miles away from me.” He continued in the same tone.

Junghee was spoiled the most when they were younger. She was spoiled so much because she was one of the few girls on either side of the family that they had for a few generations, his family mostly consisted of boys. It went to her head and she never grew out of it. It something his mother said she always regretted, not being stricter with her when she was young.

Their father on the other hand continued to spoil her and treat her as if the world evolved around her.

She hadn’t bothered to get her license because someone would always drive her around and take her where she wanted. Either that or she used the subway system.

They drove without talking to each other as they usually tried to do. Junghee kept fiddling with the radio station to play her trash music that she liked. Jonghyun didn’t have enough energy to argue with her about it and let her play it.

The ride to their fathers place was about a fifteen minute drive.

As soon as he pulled up in the familiar driveway he saw his father peak from behind the door.

He saw from the corner of his eye how Junghee’s face lit up. As soon as he parked Junghee jumped out the car and ran to her father on the porch and gave him a big hug.

He took it upon himself to to take out Junghee’s bag and sit them on the side of the drive-thru not feeling like waiting for her to do it herself. He readied himself to get back in the drivers seat when his father spoke up.

“Son? Where are you going?” He said from the porch. Jonghyun wanted to act like he didn’t hear him but he knew re would get a lecture from his mom later.

“Back home.” He said after he rolled down the window.

“Come inside for a little bit. And bring your sisters bags.” It wasn’t really a suggestion, it was more of an order.

He grunted and turned his car off.

He slung his sisters bag over his shoulder without care.

“Is that how you present yourself after not seeing your father in so long?” His father said staring at his pajamas. Jonghyun rolled his eyes and couldn’t even bother him with an answer. Why should he look nice? It’s just his father.

He rushed passed the two and went upstairs to drop her bag into her room. He wasn’t doing it to be kind, but rather because her room was on the way to his old room.

He glanced in her room to see that she still had many of her things still remaining as she made it clear that she would be coming more often than not.

He walked swiftly to his old room to see what had become of it.

A look of disappointment had spread across his face when he opened the door.

His father basically turned into a office room and storage room.

His desk with paper work sprawled all over the desk was put in one corner of them room neatly tucked away, while the other side of the room had random objects on the floor.

He had lived in this house since he was born and it was more than disappointed to as his old room like this.

But what could he do? He didn’t live there anymore.

His mom made it clear that she would be moving out of the house, she said she didn’t want to stay and needed a fresh new start. Jonghyun of course supported her decision and left with her.

Junghee on the other hand threw a fit and refused to go.

But their father for some unknown reason kept trying to convince her to go with their mom. He thought it was strange but didn’t question it.

As he pouted to himself, then his phone in his pocket vibrated.

He dug in his pocket to find his phone in no hurry.

But he eyes widen and smiled spread across his face when he saw who it was from.

They exchange a few messages back in forth until Kibum sent the message he had been waiting for.

He asked to see him!

Jonghyun was more than happy.

Kibum’s birthday was next week and he was afraid he wouldn’t be able to see him until the day of.

He ran down the stairs to see his father and sister getting ready to eat in the kitchen.

“Umm...okay bye guys.” He said horridly while rushing to the door.

“Kim Jonghyun! Where do you think you are going?” His father said sounding upset.

He didn’t understand why, it’s not like he really wanted to see him anyway.

“Home.” He answered impatiently with one foot halfway out the door.

“What reason has you leaving so early? You just got here.” He said sounding confused.

“I’m going to see Kibum.” He said flat out. No use in lying.

“I haven’t really seen him outside of school for a few weeks. His birthday is coming up and I want to see him.” He said. He knew his father would let him go. Because whenever the topic of Kibum was brought up they would some how in the discussion in an argument and he could see his father wasn’t in the mood to fight right now.

“Fine.” He father said without looking at him.

And with that Jonghyun dashed out the door missing the unusual sneer that spread across Junghee’s face.

Like this story? Give it an Upvote!
Thank you!
← Previous Chapter Next Chapter →
Author's Thoughts
Will be posting a chapter either tonight or tomorrow!
Read More →
Back to Top ↑
No comments yet
Back to Top ↑
Table of Contents
Foreword
>> Collapse chapters <<
Back to Top ↑
Community Promoted