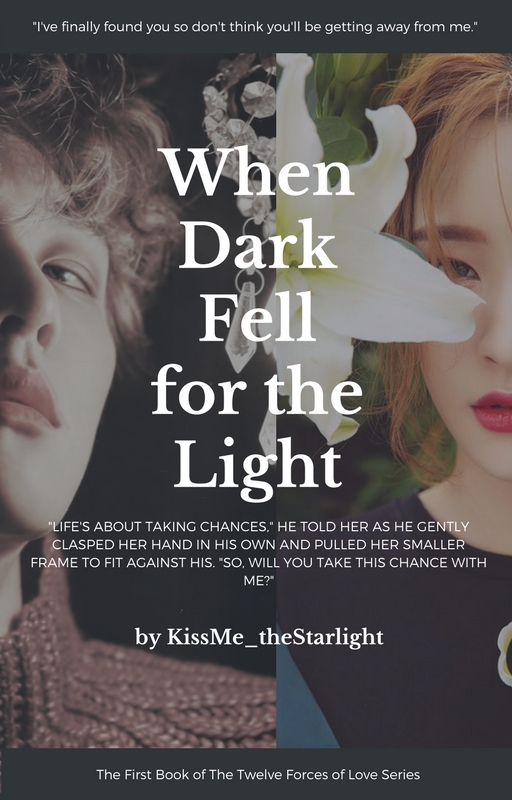 First Book in the 12 Forces of Love: EXO Series

Never in her entire life did Choi Nari think she'd get mixed up in the dark side of the world. All she had planned for her future was to get a good job and have a successful life, but he just had to walk into her life that day and introduce her to it. To a world she never knew existed.

Byun Baekhyun wasn't a man that gave many chances or do-overs. He was a hard case that liked things simple and short, but when he laid his eyes upon her he knew that he had to do whatever it took to make her his own. She was in his grasp now and he wasn't planning on letting her go.

But fate has a very cruel way of mixing things up. So what if it throws in a love rival and some danger.

"Life's about taking chances," he told her as he gently clasped her hand in his own and pulled her smaller frame to fit against his. "So, will you take this chance with me?"

There's never been any love in my life that's turned out great or even one that's lasted. Every single person I could actually say I've loved in my life has either passed away or disappeared from my life completely never to be seen or heard from again. So, I've just never bothered with it anymore. I tried to keep away from getting attached to anyone because of the fear of losing them one day in the end.

Of course, growing up I never did have the best example of love from my parents seeing as how they were fighting every day and night. I remember spending my nights locked inside my small closet in my room with my hands covering my ears at a useless attempt to block out the screaming. And with no brothers or sisters you'd think I'd get babied, but that would be wrong. My parents rarely talked to me, only gave me what I needed, and kept the fridge stocked with food. Sometimes even then they'd forget about meals and they'd eat out not bothering about me.

Due to that though I matured very quickly for my young age of ten and could fend for myself easily. Mom or Dad would forget to sign a paper sometimes so I'd had to learn to forge their signatures even though it was wrong for me to do so, I had no choice. Basically, ever since I was young I was my own guardian and soon a few months after my eleventh birthday my parents had decided to give me the best gift. Their divorce. And I'm not just saying that with sarcasm, I honestly felt as if that was the best gift they could have given me. They had fought and argued so much I had actually hoped they'd get divorced quite often.

I ended up leaving with my mom and things changed for the better over the next few years. She had changed and became an actual mother, one that really loved me. So I was able to be a normal teenager until I found out she had a late diagnosis of Leukemia. She tried her hardest to fight it for me but I knew it was hurting her more than she let on so I made her rest and made sure she didn't have to worry about anything.

She died not even a year later and I was left alone again at the age of fifteen. This time I moved in with my father but that wasn't really different from before since he was always busy with work resulting in him being gone almost every day. Though he did have a new wife and she had a son from her first marriage that I had grown close to.

He was older than me by two years so I looked up to him and he babied me, always calling me his little baby sister.  I had grown to love him as well, but like I said before everyone I've loved died or disappeared. So five years later my dad up and left with his wife, and my brother had left a couple years before that for college. He ended up going out of the country so I had no one. I had gotten a job and saved up to enroll in college courses and pay for bills.

And that brings me to where I am now, a year later without friends or family at an age of twenty-one years old working in a small cafe down the street from the apartment I live in and trying to make it by with my life. My boss liked me and told me I was an excellent worker so whenever she could, even though I insisted it wasn't necessary, she'd help me out by paying me a bit extra for rent or groceries.

I could honestly say I could see her as a second mother but I'm too scared to say I love her. Scared something will happen and I'll loose another person I love. I haven't seen or heard from my older brother since he left for college and other than a few pictures I have of us together it's hard to really remember what he looks like anymore. I do miss him though and someday I hope I am able to see him again but I doubt it'll happen.

I'm not too worried about it though, I like my life now. And even though I'm alone I don't think I'd want it any other way since the only person I have to worry about it myself and that's how I'm used to it being.

My life won't change and I don't mind that.

At least I didn't....until he showed up and changed my life. Now everything is changed and upside down. Everything is new and I don't know how to handle it.

The one feeling that I've never had the pleasure of knowing. The one thing that I've wanted yet had always been out of my reach.

The only feeling I've always known. The one thing that I've never wanted to experience over and over again yet had the displeasure of feeling every time I've been left.

When I was younger I actually used to be happy, I had a good family and an overall good life. At least I did until tragedy slowly started striking every single person in my life that I loved. I've called it a curse, the Byun family curse, and because of it I've always been careful of who I let into my life. The fear of knowing whoever I love could have something tragic happen to them too great to usually let anyone into it.

Of course I wasn't ever alone, I have close friends that have stayed with me all these years. They've been by my side ever since the biggest tragedy in my life hit. The tragedy that started everything. And that tragedy was the huge fire that destroyed the house of the Byun family and killed both parents of myself when I was eight years old. After that I became an orphan and the mother and father of my closest friend, Chanyeol, adopted me into their family.

I didn't have much of a childhood nor did I do anything a normal teenager does, as I had to start being tutored at my young age to learn everything I could about my father's business. Because when I had turned twenty I had to take the head position and take my father's previous place. So now, here I am, twenty-five years old and the head of my family which isn't much left.

My life and how I lived wasn't going to change, but I didn't mind one bit.

At least, I didn't think I did...until I saw her. Then everything changed and now I don't want to be alone anymore in this world. I want her by my side.

Next Chapter →
Author's Thoughts
I'm almost finished with chapter three now! Sorry it's so late~~ I've been working back to back and I haven't had enough energy to finish the last edits and post. Please forgive meh~!
Read More →
Back to Top ↑
No comments yet
Back to Top ↑
Foreword
Promoted - Advertise

In the year 1981, the daughter of South Korea's military general is forced to live in a discreet countryside. The last thing Sanghee expects is to be challenged by Kim Jongin, a handsome farm boy living in a stable across the cottage she's staying at.