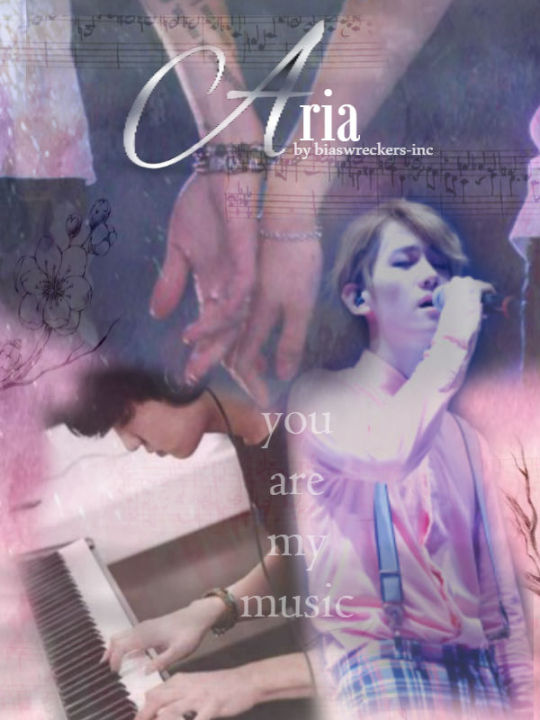 Chanyeol returned to the beach that evening. The waves were calm and the night was clear. The breeze was warmer than ever, caressing his cheek and running its long fingers through his hair. He sat by the water barefoot, allowing the water to almost meet them. The manuscript notebook sat in his lap, untouched. He had read his composition twelve times over, proofreading and editing and ultimately waiting for Baekhyun to come and look over it. He wrote at the bottom of the page in pen: for Baekhyun. It was a bold move and Chanyeol felt himself overwhelmed with butterflies each time he thought of it.

He watched the wave repeatedly roll onto the sand, pause, then withdraw for some amount of time. The even rushing sound of the water became a hypnotic lull. The lights of buildings along the boardwalk behind him began to fade, the frequency of car tires against the pavement decreased, and finally, the last group of people left the beach.

He checked his watch. He had lost track of time, and midnight was approaching.

Chanyeol drew a deep breath and ran his fingers through his hair. Perhaps he could wait a few more minutes. Baekhyun may have stayed late after work, or he may have grabbed something to eat before heading here...  All these scenarios began entering Chanyeol’s mind. He shook his leg tirelessly and checked his watch every so often.

The hour hand hit one. Chanyeol’s shoulders slumped and he stood up slowly.

Tomorrow, he told himself. Perhaps Baekhyun had a long day and could not come.

Yet when Chanyeol came back the next day and stayed, just as he did the night before, all was the same. He sat there idly waiting, waiting, until the night became clear and he was on the brink of forgetting what he was waiting for. His thoughts slowly became more urgent. He worried that Baekhyun didn’t want to see him, that maybe he was tired of Chanyeol interrupting his practice sessions at the beach. With each day, his worries became more irrational. He wondered if he had offended Baekhyun. He wondered if Baekhyun quit singing. He wondered if Baekhyun was even real, and not some angel the sea blessed him with to get his compositions started again.

Chanyeol’s evenings became long. Before, he simply came to the water to clear his mind and let any sliver of inspiration take a chance on him; now he came to the water with hope in his heart, only to have it emptied and diluted by the ocean waves as he walked home alone.

By the end of the week, his body and mind were tired. He had tried to stay later each time, fearing that Baekhyun would show up right after he left. They were all mistakes he regretted in the morning when the alarm would ring at 7 am to break into his five hours of sleep.

Maybe I’m being too obsessive, he would think.

But that evening after he was done with his last guitar student, he would still grab his manuscript book and pen and head down to the beach.

Another Saturday made its round through time. Chanyeol glanced at the clock and made note that it was six. He sighed and looked at the manuscript book sitting on the piano. It called to him. It encouraged him to try again, take a gamble and pray that he was there.

Chanyeol grabbed the book and held it. Then he tossed it aside. It hit the wall, then fell onto a pile of music. The pile began to lean, and all the sheet music shuffled as they cascaded across the floor.

He scoffed and sat down at the piano bench. His fingers found the keys and they began making their way through the notes. He closed his eyes and let his hands work on their own. He imagined lyrical tenor voice weaving in and out of the harmonies he weaved.

The voice became closer. It was a soft hum that approached him from behind.

Chanyeol opened his eyes and turned, his hands falling to his lap.

Baekhyun stood right behind him.

Chanyeol jumped from the bench, knocking over more books as he stood up. “How did you--”

Baekhyun raised a pair of chopsticks and gave a lopsided, sheepish grin.

Chanyeol blinked, rubbed his eyes, and blinked once again.

“Sorry, I’ve been busy all week,” Baekhyun said. “We have a performance approaching and I tried to get my manager to allow us to perform.”

Not a word left Chanyeol. He looked at him skeptically.

“He was opposed to it at first, but then a couple days ago I showed him that art song I had been practicing, and he gave in. He told me I was very persistent and that the fact that I would not stop pestering him about it convinced him that the music was worth something.” Baekhyun smiled.

Chanyeol’s eyes widened. “You mean… we are performing?”

Baekhyun’s smile grew wider. “Not only that. It’s the song you wrote.”

The knot that had been in Chanyeol’s stomach was immediately gone. He laughed and pulled Baekhyun into a bear hug. He held him there, close to his heart for a split second, then let go.

“That’s wonderful enough to make me forgive you for breaking into my apartment,” Chanyeol said, still chuckling.

“Sorry,” he said. Baekhyun tucked the chopsticks back into his sleeve. “You didn’t answer the doorbell.”

A thought hit Chanyeol and his eyebrows furrowed. “Are you sure about this, though? You haven’t even seen the music. We haven’t practiced.”

Baekhyun crossed his arms. “Well, where is it?”

Chanyeol bent and grabbed his beloved manuscript book from the fallen pile of music, silently apologized to it for tossing it around, and handed it to Baekhyun. He tried to read his expression as his deep brown eyes scanned the page.

Baekhyun looked up and caught Chanyeol’s eyes. They sparkled as he spoke. “We have three weeks.”

Chanyeol’s heart skipped a beat. His words rushed from his mouth. “That’s enough time to get the parts properly printed and for us to practice and put it together. I mean, you’re a fantastic singer, and I already know the accompanying part.”

“We can do this,” said Baekhyun.

Chanyeol’s face broke into a smile that filled the entire room. “Yes, we can.”