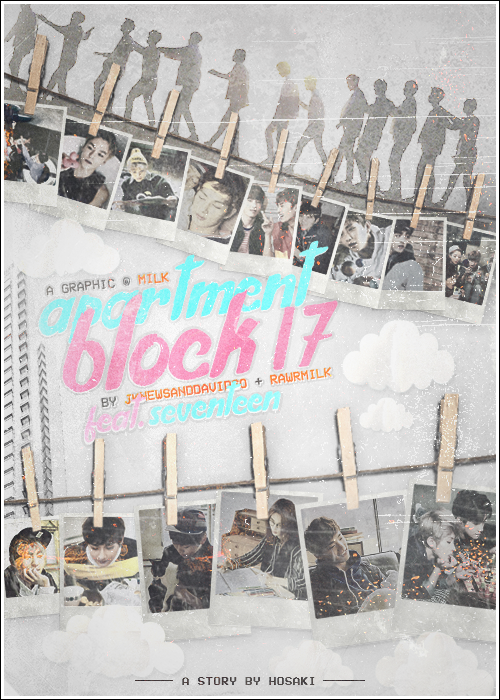 The story of thirteen teenage boys living in Apartment Block 17, just south of the Han River in Seoul. Through awkward meet-ups, strange coincidences, oblivious feelings, playful banter and blossoming friendships, the boys will experience the ups and downs of living with other people just as strange as themselves.

> Apartment #104; Yoon Jeonghan, a painter and artist, fell in love with an astronomy major from Los Angeles named Hong Jisoo after visiting his Tumblr blog a little too often. The two quickly grew close and Jisoo eventually moved to Seoul to be closer to him.

> Apartment #118; two high school teenagers who moved to Seoul in pursuit of a career in music. Jeju boy Boo Seungkwan and half-American Choi Hansol bonded over their love of music and performing, and thus created the popular vocal and rap duo dubbed as "Boonon", which gained a massive following on social media because of their talent and hilarious antics.

> Apartment #211; brothers Lee Seokmin and Lee Chan convinced their parents to let them move to Seoul together after both being accepted into an idol talent agency.

> Apartment #417; Jeon Wonwoo is an introverted literature major, looking for a roommate in order to share the rent expense. A boy with a killer smile, Kim Mingyu, applies to be his roommate after deciding to move to Seoul in order to pursue his dream of becoming an actor.

> Apartment #607; both being Chinese and having difficulty adapting to Korean lifestyle, Wen Junhui and Xu Minghao are relieved to have someone in the same boat as themselves.

> Apartment #811; the perfect example of "opposites attract", no one knows how Kwon Soonyoung and Lee Jihoon are able to stand the sight of each other. Each loves what the other hates, yet they hardly ever argue.