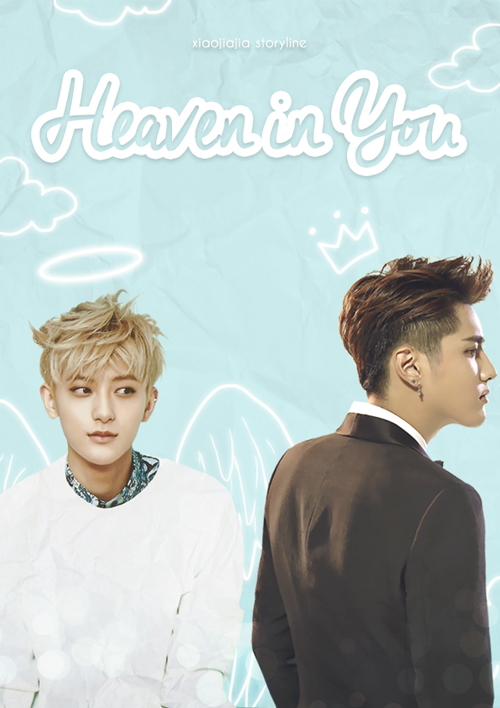 An angel shall never fall in love with human being, that is what Zitao knows for sure. Yet he finds himself captivated by a human named Kris Wu.

"I wasn't planning to fall in love with him–, I messed up." story and poster by me

No translation or adaptation allowed because people steal my work.

EDIT: I've recieved a lot of messages from readers about how they cried a river throughout the story. This is a friendly reminder for those who doesn't enjoy roller coaster of emotion or heartbreaking plot. Thank you! <3

• Hint of Hunhan, Kaisoo and Baekyeol
• This is a slow-paced story, focusing on the relationship's development
• English is not my main language, beware of grammatical errors
• Will have some [M] contents in further chapters (warning will be added on the title of the chapters)
• Not really a smooth romance, drama ahead drama ahead drama ahead!

There are some rules an angel has to obey while they’re staying in this world.

First, never reveal your identity to a human.

It’s an old rule, but there are still some angels who broke it. There are some people who know the existence of angels around them, but it’s all good as long as they keep it a secret, as long as they don't start any problems.

If anything goes wrong, heaven can always send an archangel or angel with a higher rank who has the ability to erase human’s memory. Though the concerned angel will get some scolding and punishment, it isn't too hard to deal with.

Second, never attempt to change someone’s fate because it is God’s plan.

Some angels messed up. They save people who’re supposed to have misfortune. The cupids miss their arrows. The messengers fail to take someone’s life. The guardian angels fail to protect their assigned human.

happens sometimes and it has bigger consequences if this rule is broken. Things will get hectic and they will have to create a new plan, or fate, for the concerned human. Of course there will be more scolding and twice the punishment, but they can still handle it.

Third, be kind and do everything with love.

This is the kind of rule that doesn’t need to be memorized since they’ve been taught about this since forever. Angels are supposed to have a kind heart and be kind and loving and etcetera, it goes without explanation. Though there are some angels who can’t really keep their hands to themselves but shush, no one needs to know. After all, living among humans can be pretty stressful, especially if there’s a person who doesn’t deserve to be treated with kindness, or in short, an .

Most of the young angels only know about these 3 rules, they don’t know about another rule. The rule that's never been spoken because it never happened, or almost never. This rule is long forgotten since the last time it’s broken was probably hundreds of years ago, but this rule is still valid and the consequence of breaking this rule is no joke at all, or so the rumor said.

That rule is, to never fall in love with a human.

And then there is Zitao, a young angel who has broken the three rules, and probably the last one too.

And there’s also a person who can be blamed for it in some way or another, Kris Wu.

A/N
My first story in AFF hhh I'm so nervous but I hope I'll be able to write something enjoyable!
I've had this idea for a while and decided to write it down, hopefully I can manage to complete it because I personally like this idea huehuehue
Anyway, I can't really promise for fast update since I'm pretty busy with my life now, but I'll try to write it little by little on my free time!
English is not my first language so I really apologize for grammartical mistake and everything.
Thank you and I hope you'll enjoy my story!
♥

Next Chapter →
Author's Thoughts
28/02/21 - you guys literally sent my first fic to the fEATURED SECTION ??? I'm kinda embarrassed cause its so old and cringy but thank u so much (T⌓T) 💕
Read More →
Back to Top ↑
No comments yet
Back to Top ↑
Foreword
>> Collapse chapters <<
Promoted - Advertise

Bride of the Virtuous