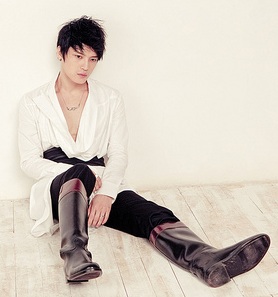 Kim Jae-joong (Hangul: 김재중; Hanja: 金在中; born January 26, 1986), also known mononymously as Jaejoong, is a South Korean singer, songwriter, actor, director and designer. He is best known as a member of the Korean pop group JYJ, and was one of the original members of boy band TVXQ. Kim was also known by the stage names Hero Jaejoong (in South Korea), Jejung (ジェジュン) (in Japan), and 英雄在中 (영웅재중) (in China). Kim is now using Kim Jae-joong (JYJ) for his activities.

Kim has branched out to act in TV dramas including Sunao ni Narenakute, Protect the Boss, Dr. Jin, Triangle, SPY and most recently Manhole; and in films such as Heaven's Postman and Jackal is Coming. He was also the Executive Director for JYJ's 2011 Worldwide Tour and the 2011 LG Whisen Rhythmic All Stars.

In January 2013 he released his first EP, titled I, followed by a full-length album, WWW in October the same year.

How do you watch live performances in Kavecon

A Note from the Author

Tell Me Something Good

Would you like a YunJae wedding in Tides Waltz? Please, answer in the poll inside. Thank you guys!

Photo People Talks about past

Beta Reader for Arc of Time

#JAEHOEXCHANGE2018 is open for sign-ups!