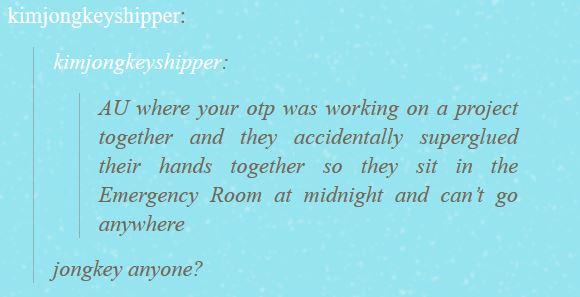 “Jonghyun, it won’t stick.” Kibum complained the wooden ice cream sticks letting go as soon as the boy let them go. Jonghyun groaned, why did they have to get distracted with playing video games again?  This project was due tomorrow; no it was due in little more than ten hours. The younger boy looked worried up. This was going to affect their grade negatively if they didn’t finish it by tonight. Jonghyun let the circuit board go, the simple mechanics of a battery charged toy car. But there was no car. Well, not yet.

Kibum sighed and let go of the sticks. “We need stronger glue, or maybe robe. Anything so that we can make a body for the wheels.” It was true and Jonghyun was thinking. He didn’t find any glue in his room, and the one they used now was a dried up paper one. “Let me check in the handy kit from my father. He must have something.” The boy whispered knowing damn well that he was not allowed in there. But who would miss a couple of drops of glue?

Sure enough, he did find a small bottle in the box he was not allowed to look in. “These things are not toys.” His father always said but they were not playing, they were creating. Jonghyun tiptoed back. Scared that he would wake his parents who thought they had long gone to bed.

“Is super glue good?” Jonghyun asked as he entered his room again. “Perfect, come here and help me.” The boy nodded and sat down in front of him. “Hold your hand open.” Kibum ordered so that he could put his attempt of wooden stick car on it. “Hold this part down with your thump please.” It would go so much easier with four hands

“Move your fingers.” The bossier of the two said but Jonghyun didn’t know how. Kibum just laced his own ring finger and pinkie with his so that he could push them down and get to the more tricky parts. “Oh .” The glue seemed more liquid than Kibum had expected. He had missed.  “Jonghyun shrugged. “Just add more. Make sure that it is glued this time.” Kibum followed the order making it a little messy. The glue sliding off the wood and onto his skin. He would just have to clean it later.

“Hold still, we need to dry it properly.” Kibum said as he moved their hands a little to check if everything was coated with glue. Jonghyun could feel the cold liquid seep between the two fingers he had laced with Kibum. Their hands making an open nieche for the car to sit in. “That should do it.” and Jonghyun giggled as he felt the tickling glue run the joined sides of their hands.

“Okay. Lets see.”  Kibum used his free hand to pick up the car. But the car was not going anywhere. “.” No way. He figured that the glue had gotten to their skin but this. “Ow ow!” Jonghyun whimpered and Kibum pulled a little harder. The wood was stuck to the skin of the other’s thumb. “Hyung just pull.” Maybe he needed to. But Jonghyun whimpered again. “Kibum, it is really stuck.” He was starting to panic.

Kibum bit his lip. “Just like a bandit, pull it off in one go.” Jonghyun sighed. He was not that brave. In favour to just let the aid sit a couple of more days if needed. But now he could not go around with a car on his thumb. Kibum held his hand in both of his now all of their fingers laced. The wooden structure hanging off the large digit. “Three, two, one.” And just like that and a little help from his friend Jonghyun pulled with his free hand the car off his finger, hissing at once.

“Are you okay?” Kibum asked worriedly. Jonghyun’s eyes were watering. His breath hitched, his lip between his teeth. A death grip on their linked fingers. That hurt. “I’ll be.” He finally said, wanting to inspect the damage. His face fell, Kibum’s eyes were wide. “.” Their hands, they were stuck. Glued and glued well. Their fingers glued together till the middle one, half of their palms joined. “Oh dear god!”

What now? Kibum stared at him as if he had the answer. But Jonghyun was sweating. What if his father found out! He would be dead meat. “We have to tell your parents.” Kibum hissed as if he knew what Jonghyun was thinking about. No, no they did not. They were capable of sorting themselves out. “We need to go to the ER.” Jonghyun stood up so abruptly both had to whimper at the ripping of their skin. “Hyung, please.” Nope, Jonghyun was not listening. With laced fingers, he pulled Kibum with him. He threw him a jumper and picked up his wallet. “Hyung, what are you doing?” the younger one was scared but Jonghyun was freaking out.

“I’m calling a taxi.” He said, Kibum realised how pale Jonghyun was. He stayed silent. He knew how strict the other’s parents could be. The taxi came soon enough. Jonghyun asked for the nearest ER and with that in mind the Taxi driver figured they were in a hurry. Kibum smiled. Why, they were not dying, they were just permanently holding hands. That didn’t seemed too bad. He was starting to see the humour in it.

“Excuse me.” Jonghyun approached the young nurse at the front desk. “We had a little glue accident.” He held up their hands. Kibum couldn’t face it. A blush on his cheeks now while the nurse giggled. “You glued your hands together?” The nurse was cute and Jonghyun’s eyes grew to the size of a puppies. “I’m afraid so.” The mood was lighting up, Jonghyun seeing how silly they must look. “You must be really close then. We had a man here last time because his overly attached girlfriend glued his couple ring to his finger so that he could not take it off.” Another nurse joined in, interested in this late night story.

“I’m hardly over attached.” Kibum whined as he confessed to his glue crime. “Jonghyun rolled his eyes. “We are not even a couple.” Kibum hit him with his free hand. “Yeobo!” He played in drama. Making the nurses laugh. “Just fill these and we will help you with your divorce.” Two pairs of documents were laid for them and they took a seat.

“You know, it could have gone worse. It is a story I will tell my children.” Kibum said as he looked over the form. “I won’t. When my parents find out I will be castrated.” The younger snorted. “You can blame me you know. I have no skill in gluing.” A sad fact for the younger to realise. “Kibum.” His joke was ignored. Jonghyun looked at him with pity. “How are we going to write?” The younger raised his eyebrow. With his hand of course. “Oh…” Kibum realised it too now. Jonghyun’s left hand was glued to his right.

Kibum laughed, giving up, his bad karma getting the better of him. Jonghyun joined him, the terror of the situation sinking in humour. “We make a couple of idiots.” Kibum dried a tear with his free hand. Jonghyun raised their hands and pointed at them. “This, Bum. This are relationship goals.”

So yeah that was for s and giggles